A mythology-based shooter? Sure, why not? Gun down multi-headed creatures, flaming dragons, evil statues and whatnot! Though not explicitly related to the Greek mythology, as a game Sylphia has many aspects in common with Greek figures, starting with the idea of the sylph – a mythical creature of the air intimately related to fairies and angels. The main character is a girl who’s been mutilated by demons and gets endowed with magical powers by a fairy goddess, thus engaging in a revenge quest against those who slew the people in her village (this is all shown in the game’s intro through images with no dialogue).

While the concept does sound interesting, especially for fans of shooters with fantasy themes, Sylphia doesn’t achieve the same status of similarly minded titles such as Dragon Spirit or Phelios. Absence of difficulty is to blame for most of this because we’re talking about an extremely easy clear here. Other than that the game is fine, with many sources pointing that Compile is actually the developer working behind the Tonkinhouse brand. There are hints in Sylphia that back this up quite well, and those who have played their share of Aleste titles will certainly spot them. I won’t delve into the details, suffice it to say they’re all related to the weapons system.

The heroine in Sylphia is able to fly in three speeds switched at the press of the SELECT button. I use mostly speed 2, you’re either too slow or too fast in the other settings. Button II fires her weapon and button I deploys a bomb that detonates a thick vertical laser beam while making the character invulnerable. Bombs are limited and weapons are selected/upgraded by colored power-ups that come in groups of four rotating icons or by themselves in small carriers that descend from the top of the screen at regular intervals. Just stick to the same color to increase part of the weapon’s power in three steps. You can take two hits in each life, and if you don’t take the heart icon that refills health you’ll die on the third hit. Then you’ll be respawned with the current weapon at its basic power level.

In line with the Greek knowledge of old, weapon types are related to the four classical elements: fire (red), air (green), water (blue) and earth (yellow). When you take successive items of the same kind you upgrade the particular aspect of each one of the weapons: fire will start shooting diagonal homing flame shots, air generates slow whirlwinds that develop forwards diagonally, water creates an extra fire stream opposed to the direction you’re moving and earth forms a protection barrier that rotates around the character. In order to power up the basic weapon attack you must take the orbs that appear in groups of three when the item carrier gets hit.

As usual in shooters of this kind, some weapons are more suited to specific situations. For example, a fully powered air weapon is excellent for the second boss, even though water is obviously the best choice for the game as a whole. Finally, the diamond-shaped items that tend to float towards your direction fill that little meter below the life/bomb count, and every time the meter gets full you gain an extra bomb. Score hounds might want to know that all items are worth a few points, so get them all to incrementally beef up your final score. 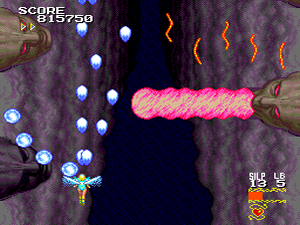 Yuck! Is that tutti-frutti puke?

In direct contrast with is challenge level, Sylphia boasts excellent graphical design across all of its eight stages. It's technically very competent, only with scarce moments of slowdown appearing when bosses are about to irrupt into the screen. The soundtrack is also very good, even though the balance between music and sound effects suffers from the most recurring problem in the PC Engine platform (SFX too loud) and the overall mood is too upbeat for the dark - yet colorful - environments you'll be facing (the only parts where the music presents itself in a gloomy fashion are in the intro and ending sequences). Regardless of any gripes involving the sound design, if you fancy otherworldly settings and strange-looking creatures you'll be right at home here because Sylphia is simply a 16-bit feast for the eyes. Besides all sorts of walking and flying enemies, keep an eye out for particularly creepy fiendish bosses (exposed boobs!). There are two bosses per level, and since they're very creative in regards to design and attack patterns it's just a shame that they also don't offer much of a challenge. And when you figure out that it's possible to destroy a great deal of enemy bullets the whole game becomes even easier.

Want more easy? Here are some other refreshments in the gameplay: hold tight to the current life during a boss fight because you regain all your health (two hearts) when a new stage begins; except for diamonds, upon taking any other item you're given a very brief stint of invincibility, which is quite useful to evade hairy situations; an extra life is awarded for every 70.000 points scored. Conversely, finding a genuine copy of Sylphia isn't easy by any stretch of the imagination. Given the game is one of the rarest entries in the CD shmup library for the PC Engine, you won't find it for less than a few hundred dollars.

Following a few exploration minutes to figure out the weapons system I beat the game on my first credit, then proceeded to do it again on Special/Very Hard. The increase in difficulty is minimal and appears mostly on bosses. I played another credit on Normal and the 1CC result is below. This screen is displayed for half a minute once the final credits are over, and as much as I tried I couldn't understand the math behind the massive final bonus other than it being related to remaining life stock, bombs, etc.