Of all chapters of the neverending battle against the evil Bydo empire, R-Type III - The Third Lightning holds a special place in the hearts of many gamers, especially those who lived through the 16-bit era. A dedicated console entry that followed the arcade-exclusive R-Type Leo, it fully realized the potential of Nintendo’s home platform in a great outer space adventure that honed and further fleshed out the ideas of the previous chapters into an exciting brand-new experience. Difficulty is spot-on and a tiny bit above Super R-Type and its full stage checkpoints, since the game fares better at the claustrophobic, otherworldly stage design pioneered by the classic R-Type. Nonetheless it’s fairly manageable depending on how you're able to use the resources available to the R-90 spaceship.

Besides the flair inherited from its noble arcade origins, R-Type III also brings something new to the table by allowing the pilot to choose from three different force units/pods. If you still haven’t played an R-Type game yet, know that force units are those invincible droids that attach to the ship and give it the ability to employ its firepower in the benefit of mankind. They’re the heart and the soul of this particular series, so having three force units to choose from must have been the bee’s knees back in 1994. Add to that the more detailed and brighter graphics, the great music and an actually decent use of mode 7 effects and you’ll understand why this is one of the best regarded shmups in the SNES library.

Getting comfortable with the SNES controller is very easy in this game, given that you can configure all inputs as you wish. My favorite layout is Y for auto shot, B for shot, X/A for force unit control and L/R for charge shot selection. On dealing with the bare ship’s capabilities, the shot command is mostly employed to activate the charge blast by being held and subsequently released according to the charge gauge status. The second charge level is obviously the most powerful one, but in R-Type III you’re also entitled to select between two charge attacks. Beam is the primordial firepower boost from the first game, here upgraded with a second level that makes the charge shot pierce through walls. Hyper is the new charge variation that, when used on max level, bursts into a close range spread and then fires a bulkier straight shot for a while before overheating. As a result the ship needs to cool down, during which time you’re not allowed to use any charge attack.

And then there are the force units, each with a specific behavior when detached or attached to the ship. Just approach it from whatever side you want it to dock, and use the correct button to detach or call it back. Force units first appearance and upgrades happen by collecting the colored items: the first one generates it, the second one gives it the color’s primary power, the third one maxes it out and further ones are merely shot type switches. Since each color endows the ship with different shot types according to the selected force unit, here’s a brief summary of their capabilities:
The item gallery is completed by speed-ups, missiles (take two for max power) and bits. Missiles are of one type only and have a mild homing nature, whereas bits hover above and below the ship, acting as extensions of the force unit itself. One of the selling points for many people here is the default speed of the ship, which unlike previous chapters is actually quite decent. I daresay you don't even need to take a speed-up during most of the game. 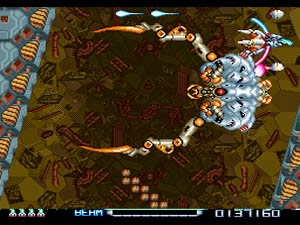 A wall-crawling mechanical spider at the end of stage 3

It's hard not to enjoy the results when a shmup has a design that's built around the strengths and weaknesses of the ship's weapons so exquisitely as R-Type III does. All stages are somehow conceived according to the styles presented in previous games in the series, yet they're perfectly capable to stand on their own. There are outer space stations clashing against each other in the first level, an acid dripping organic environment in the second level and as you reach the third stage you must navigate vertical shafts inside what appears to be a large enemy base. Then you must weave through thick lava streams in a maze-like corridor and face a boss rush (probably inspired by Gradius) before entering the lair that takes you to the creepy final boss. Note how mode 7 is used to good effect throughout the game, as enemies and scenery rotate and zoom in and out of the screen with delightful elegance. A little slowdown should be expected, thankfully not to the same level seen in Super R-Type. Flicker is rare and often associated with explosion sprites over busy weapon animation.

Pacewise the first stage drags a little because there are many dead spaces, but the rest of the game easily compensates for that. Other highlights include the cool introduction of the ship as the first stage starts and the way the song for the first level in R-Type is remixed as the theme for the first level of R-Type III. It's pretty epic, especially if you're a fan of the series. However, I felt a little sorry for the game when I found out the scoring system is broken: you can milk enemies forever in the chamber prior to the last boss if you so wish... Of course that doesn't take away from the value of the journey, since survival play is still lots of fun for shmuppers of all backgrounds. The first score extend is granted with 20.000 points, the second with 70.000 points and further ones with each 70.000 points afterwards.

My favorite of the new force units is type 2, mainly because the shadow laser is incredibly strong and effective. What kills the cyclone force for me is the way the yellow weapon works. I chose type 2, looped the game and ended my credit on the 2nd encounter against the second boss. The second loop comes with faster, stronger and sometimes new enemies, all firing faster bullets at a higher rate. There are no extra difficulty settings in R-Type III, which is odd for a 16-bit console game that's part of such a famous franchise. 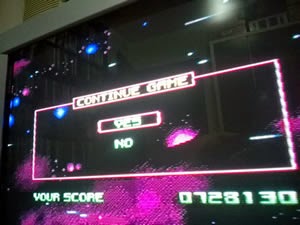