Whenever people hear about the term "steampunk", movies and literature is where they naturally go for references. Video games weren't really ready to solidly portray the fascinating style associated with this particular branch of science fiction until the 8-bit generation was born, but when it comes down to shooters it would still take one more generation for players to start seeing something. Even though a faint influence of steampunk can be noticed in series such as Twin Bee and Battlemania, the honor of being the first shooter to fully adopt this thematic design choice is Steel Empire for the Mega Drive, or Empire of Steel as it came to be known in Europe. You might also see mentions to The Steel Empire, as depicted in the start screen of the game itself.

As far as gameplay goes, there's no doubt that this one isn't an unanymous success among fans of the genre, since it suffers from heavy slowdown at times and falls below the average when you consider challenge. On the other hand, Steel Empire is nothing short of a great achievement in game design as a whole, from graphics to music, from the short cinemas to the way stages are laid out. For those with an adventurous heart the game radiates awesomeness, and the best way to measure its appreaciation over the years are the late releases of a couple of unexpected ports (Game Boy Advance in 2004 and Nintendo 3DS in 2014) and the clear influence it had in future shooters such as Progear and Sine Mora. 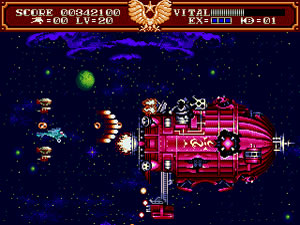 In the war between the Silverhead and the Motorhead empires, in each stage the player is allowed to choose between two vessels to enter combat: a bulky dirigible with slow speed and strong armor or a smaller light plane with faster speed and weaker armor. This speed performance gap is shortened as you power up both ships, so the defining aspect of which one is better or more suitable to a specific level falls on the kind of bombs they drop. The little plane spreads ground bombs whereas the dirigible pops bomb rounds upwards, in attack patterns that evolve in quantity and power as you progress through the game. I ended up using the dirigible only in levels 3 and 5, which have a series of large battleships with weak points in their lower hulls.

Motorhead forces have been advancing over the land and it's up to you to take down their steam-powered machines from crimson-shaded skies. Button B shoots left, button C shoots right and button A deploys a powerful lightning bomb that causes major damage to enemies and makes the ship invincible for a little while. Every time you get hit or scratch an obstacle you lose a portion of the energy gauge, and a life is only lost if this gauge gets completely depleted. A warning message appears when you run out of energy, but it's possible to get it back by collecting the heart item from destroyed carriers and special enemies. Preserving energy/health can be tricky at times, so learn how to deal with enemy movement and all those patterns of star-shaped bullets and accelerating rockets.

Items float in a circular motion before drifting away to the left side of the screen. Besides the heart for energy refill purposes, players also encounter extra lightning bombs (B), score bonuses ($), speed-ups (S), options (O), extra lives (1UP) and upgrade points (Ex). For every 3 of these upgrade points the ship's firepower is increased by one level, in a maximum of 20 levels that can only be achieved somewhere in the second half of the game depending on your performance. If possible don't take too long to collect the items, otherwise you might lose them as they go away behind walls.

All levels in Steel Empire have a mid-boss and a main boss. Firepower and options make quite a difference especially if you're fighting them. The good news is that you just lose the options you're carrying upon death, with no power loss of any kind. When continuing, you will always resume the game either at the start of the level or after the mid-boss.

If there's one thing that discredits the great level design of Steel Empire, it's the reappearance of the large battleships I mentioned above in more than a single stage. It's as if the developers wanted to give some function to the dirigible, whose otherwise only real advantage is the ability to fill up the whole energy gauge (you'll never have a full one with the little aircraft). Over the mine city and across the high speed tunnels of the caverns in the second stage, the small plane is obviously the best choice. Steel Empire then continues to show some awesome parallax graphics of clouds, beaches, cities and buried machinery in between encounters with all sorts of aircraft, ground turrets and huge bosses. The background station that bombards a foreground battleship might be just for show, but it lends awesomeness to the action and predates similar visual moments seen in later shooters like Eliminate Down, Border Down and Thunder Force VI. The last stretch over the surface of the moon is particularly amusing, final boss fight included.

For a game that comes out as a little longer than usual, the scoring system sure does a nice job of motivating replays because Steel Empire rewards good performances with higher scores. At the end of a level the player receives several fixed and variable bonuses based on stage clearing, energy left, no bomb usage and no miss. Besides, all items are worth a little something. The lesson is simple and very familiar to gamers who understand the relation between challenge and practice.

I played during the weekend to learn the game, then came back later to try and squeeze what I could from the scoring system. The result is below (Normal difficulty), and I just pity the fact that I died once in stage 6. I should've bombed... No-bombing isn't as big a bonus as no-missing. :) 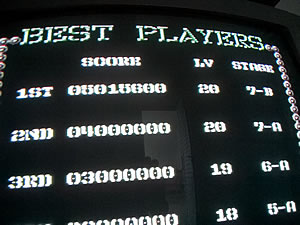