I don’t have any experience with Twin Eagle the arcade game, but I have a strong suspicion about the developer’s inspiration to come up with this title. I’m probably being mean by stating this, but could it have been an attempt to capitalize on the success of Toaplan’s Twin Cobra? Unfortunately (or not), time has segregated highlights from stinkers, which explains the huge popularity gap between the aforementioned games. Does that mean Twin Eagle is a stinker? If we’re talking about the NES version the answer is “rightfully so”, for a series of reasons ranging from its source material to poor choices on the porting job.

What’s more disappointing is that the NES game tricks you into thinking it might not be that bad once you take the first speed-up icon. That’s when that helicopter starts moving like it actually should, and while weaving through those large glowing enemy bullets you can’t help but believe you might be at the verge of enjoying a nice 8-bit shmup. But then you die and you’re back to that horribly sluggish default speed, surrounded by enemies from all sides and with no bombs to help you out. So what we have here is another case of a shooter that requires a 1-life mindset to be played. Unless you get lucky upon a respawn, that is. 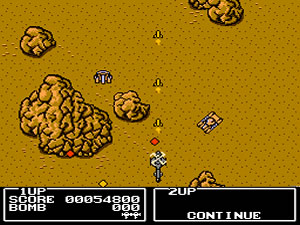 Just like in the arcade original, Revenge Joe’s Brother (sic) is the idiotic subtitle that appears in the start screen of Twin Eagle. Smartly omitted from the game box, I believe it refers to a dreadful fate in the family history of the pilot – or pilots, considering that this one allows co-op play. However, if we as player 1 are playing the role of Joe's brother, who’s the one piloting the second helicopter as player 2?

The first stage takes place over the ocean with drab-looking waves, while jets and boats come in and out of the screen with little enthusiasm. When destroyed, some of them will drop a single item that adds one bomb to the bomb stock, which should be triggered with button A in order to wipe the screen from enemies and bullets. Button B fires your weapons, which can be changed by collecting the desired item revealed by destroying specific enemies. And here starts the problems with Twin Eagle: in the biggest departure from the arcade gameplay, all items on the NES port are in the same container, one that must be shot at for them to cycle. That wouldn’t be a problem in itself if it weren’t for the fact that it takes just a single shot for the cycling to happen. Since there is no autofire and I used a turbo controller to have it, selecting items in this game often becomes the same as dealing with a slot machine.

Item nature and cycling order is as follows: speed-up (big S) → power-up (P) → straight shot (little S, default) → 3-way spread shot (W) → missile → 2-way shot → speed-up. The most important item to get is the speed-up, and then power-ups to enhance firepower (maxes out with three Ps or weapon items of the same type). All weapons can get you through the game, but the ones I favor are the missiles and the default gun. Missiles are the best because they melt everything easily, and even though the spread gun offers good side reach it just lacks power. Don’t bother getting 2-way because it’s impossible to be harmed by enemies, so don’t fret (too much) with jets coming from behind. The problem with dealing with weapons is that it’s very easy to take the wrong item in the heat of the battle, which then brings us to the second problem regarding item collecting: that damn icon has the annoying ability of blocking the chopper’s firepower, a hindrance that can be more troublesome than any enemy in certain situations. That’s often when I bomb, just to clear the screen and be able to move around.

As for bombs, there are lots of them in the first stage. So much that it’s easy to come out of it with more than 10 bombs. However, as I mentioned above the problem with bombs is that when you die the stock goes to zero. Twin Eagle isn’t necessarily a hard game, but you need to keep your eyes open and put them bombs to good use. There are no extra lives or extends whatsoever.

So much for gameplay, but what of aesthetic design? Graphics are poor but get the job done, movement is fluid, bullets are very visible and slowdown kicks in only in the final stretch of the game. Too bad the enemy gallery is so poor and repetitive, just like the music that plays over and over from beginning to end. Of particular note is the absence of bosses, which in Twin Eagle are replaced by brief speedy sections that start when you see the word WARNING pop up on the screen. Jets, turrets, boats, a few sparse helicopters and little green men comprise the whole of the resistance as you’re taken through oceans, rocky mountains, forests and city bases. What deviates a little from the expected cliché is that every now and then you’ll destroy ground targets that hide hostages. Take them because you’re a fighter for peace, not because they’re worth something at the end-of-stage summary.

Yes, Twin Eagle is weird, beginning with its subtitle. It starts boring, picks up in the middle and then goes back to being boring. Don’t take too long to check your score when the final stage is over, because unlike in previous stages (where you have to press START to move on) the summary screen will be there just for a moment before the ending text starts scrolling up. Also don’t expect to see any mention to Joe or Revenge Joe. 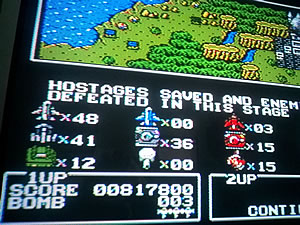 Note: the game has an arcade-exclusive sequel named Twin Eagle II - The Rescue Mission.
Posted by Edward at 10:05 AM