I had been taking the Nintendo 3DS with me in my trips for light diversion purposes, but this last time I decided to seriously face the challenge proposed by European developer Shin’en in Nanostray. And so I cracked the seal in my list of beaten shmups for a Nintendo handheld console. Things that definitely lured me into the game include the colorful and detailed graphics, the cool soundtrack and the opportunity to play another vertical shooter with the slightly tilted perspective that reminds me of Silpheed and Raystorm. Getting used to the dual screen was a little strange at first, but thankfully the interaction with the lower screen is minimal even though it could’ve been better.

Nanostray is purity incarnated for those who can’t stand text or too many cinemas in their video games but love some quick eye candy. It boots up fast and offers just the right amount of animation sequences as the spaceship goes from one mission to the next. Of all game modes available, the one to be played as an arcade adventure is the option named “Adventure” (duh). Each stage is a planet that must be visited and purified of evil alien scum, with the player being allowed to choose the order of the first three stages. After they’re done it’s once again possible to tackle the next three in any order. Only the final two levels must be played one after the other, as the ship enters a fortified enemy base with lots of corridors and giant doorways. Each level beaten in this mode is unlocked in the “Arcade” option, where the player is encouraged to score attack each planet separately.

“Challenge” and “Multiplayer” options complete the package. The first one has several different requirements that must be fulfilled when playing specific levels, which in turn unlock related extras in the gallery section. 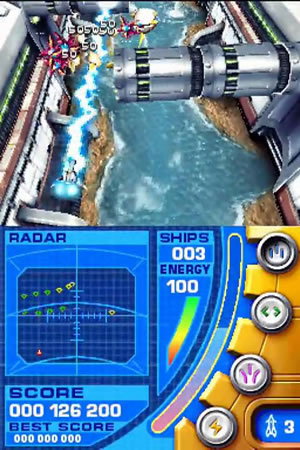 Weapons come in four flavors switchable on the fly by touching their symbols in the lower screen: forward pulse shot (a soft burst of blue energy), two-way side shot (no frontal attack at all), seeker (has mild bending ability) and lightning (electricity discharge that latches onto enemies). Weapons are fired with button A, bombs are triggered with X and weapon boost is activated with B, with no option to remap buttons. As long as there is enough energy in the weapon gauge, this boost amplifies the power of the weapon in the following ways: pulse shot turns into a killer laser beam, side shot efficiency is heavily increased, seeker fires additional bursts with better homing function and lightning creates a cloud of electricity that hits everything within a short radius.

Recharging the weapon gauge is done by collecting blue coins released whenever you kill complete waves of small enemies. One coin is sufficient to refill the whole gauge. Other enemies might leave behind gold coins worth 500 points each (tip: whenever you hold button R all coins are automatically sucked into the ship). A health bar allows the ship to take some hits before blowing up. It does not, however, protects it against collisions, which are fatal and mean instant death. Every credit starts with five lives and there are absolutely no health recovery items or extends of any kind. As for bombs, they work in standard classic shmup fashion by inflicting lots of damage and rendering the ship invincible for a little while.

There is absolutely nothing wrong with the core gameplay of Nanostray. In fact, it’s actually decent fun only marred by a few problems such as the awkward weapon selection scheme and the recognition of boundaries – ramming into enemy ship hulls or touching unsafe areas close to borders is very common as you start to play, but this is eventually ironed out with memorization. Most of the fun comes from boosting weapons in screens filled with enemies, as well as sucking all those coins with button R. The obvious question in this case is why this sucking ability wasn’t implemented by default into the game, and the answer unfortunately points to an aspect that’s bound to negatively hit the fun factor. This aspect is the scoring system.

In order to score higher in Nanostray you need to refrain from using the weapon boost attacks, since each successive wave you destroy without draining the boost gauge is worth more points. You also can’t use the coin sucking function, otherwise you’ll reduce the so-called “valor” bonus that’s shown at the end of the level. Note that the valor bonus is also reduced whenever you’re shooting aimlessly without hitting anything. All things considered, what I just put in this paragraph is enough to turn the game into a totally wooden experience that excludes almost everything that’s cool about it. Killing the larger enemies, for instance, becomes a chore because it’s very hard to do it without recurring to a weapon boost or letting precious waves go by. Even if a specific weapon is theoretically capable of destroying the thing before it leaves the screen, switching weapon types on the fly without shifting your focus from the action is too risky and requires ninja training.

I can cope with the small weird quirks of Nanostray’s gameplay, such as being denied the blue coin if I destroy waves too fast (as they’re entering the screen) or dealing with the unreliable nature of the seeker weapon boost (the energy burst sometimes goes out in the wrong way and totally misses what you should be targeting). However, going through this visual feast of lasers, bullets and handheld eye candy while worrying about collecting all coins manually and switching weapons too often is just painful. All my weapon switches were done at the start of a level or at very specific points in the game, as in when the quick waves overlap the large battleships in the Sunahara Desert stage (seeker → lightning). Some boss fights also require a little weapon switching to be won faster, but these are often possible in between transitions without enemy bullets being fired at you.

Besides the elusive valor bonus, other bonuses to be collected at the end of the level consist of extra points for the number of destroyed waves, ship stock and unused bombs. Adventure mode allows three save slots and each successive difficulty (Normal, Advanced, Expert) decreases the amount of resources while increasing the damage taken by the ship without making the gameplay actually any different. Your overall performance is ranked from F to S++, while scores obtained in Arcade mode – which is locked at the Advanced difficulty – can be filed at the game’s website via a code.

I played in Normal and valued fun instead of scoring, so I was almost always with button R pressed and wreaking havoc with the boost functions. The final result is in the picture below (don't press any button on this screen or you'll be sent into the final credits/animation and never see your final score again). Note: Nanostray is the spiritual successor to Iridion II for the Game Boy Advance, and the first in a series of shooters with the “nano” prefix in the title, which also includes the sequel Nanostray 2 for the Nintendo DS and the Nano Assault arena shooters developed for the Nintendo 3DS. 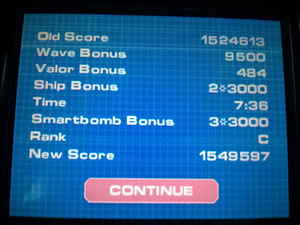