Third in line in the history of Milestone arcade shooters, Karous also has the honor of being the last officially licensed release for the Sega Dreamcast in Japan, six years after the console’s sad demise. Coming to the home platform just a few months after its arcade birth, it points to a refinement in Milestone’s approach to design, in that gameplay is made less complicated than previous efforts Chaos Field and Radirgy. While based in elements originally presented in the latter, to the point where it’s feasible to consider it a spiritual sequel or a spin-off, Karous still uses cell-shaded graphics but eschews the abundance of color seen in Radirgy in favor of an almost monochromatic gray palette.

The word “karous” is the equivalent to “crows”. It’s also the name of the main character controlled by the player, which is nicely animated with an avian form and even a beak (easier to notice when you choose to play on a large TV or in TATE mode). How this fits into the sci-fi urban setting of the game is beyond me, given that all your foes are flying machinery with occasional large beasts that cover the screen with bullets. The several flashes of conceptual artwork that appear in between stages should hint at something about a story, but we’re not given any chance to figure out what’s going on. Other than that, a navigator lady that looks a lot like the girl from Radirgy displays a few messages in Japanese every once in a while.

I could say that one of the strongest assets of Karous is being the perfect gateway into the world of Milestone shooters, both in matters of difficulty and ease of grasp regarding gameplay. It's remarkably addictive, with no need to learn convoluted inputs as in Chaos Field or to decide between three different weapons as in Radirgy. 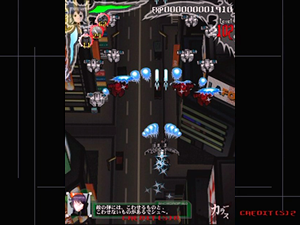 Configurable controls consist of shot, sword slash and DFS bomb activation. I assume DFS stands for Defense Force Shield or something similar, a bomb that looks like a skull and plays a pivotal role both for survival and scoring. Karous can also attack by shielding, and all it takes to activate the shield is ceasing to shoot/slash and waiting a very brief moment – the shield materializes and starts deflecting all bullets that hit it. While this mechanic is inherited from Radirgy, everything else in the gameplay of Karous takes a different route. Attacks are upgraded separately and are directly related to how much you use shot, sword and shield throughout the game, each with a power level that starts at 0 and tops at 100 experience points. For every 10 points weapons receive a boost in power, with the most important ones happening at 20 and 50 exp.

Each destroyed enemy or bullet generates pills that fill up the experience meters for each weapon, as well as charging the DFS blue gauge on the left of the screen. Every time a weapon is leveled up a color-coded circling animation can be noticed around the character: blue for shot, yellow for shield and green for sword. When the DFS bar is filled up it starts glowing and a smaller gray circle sinks into the character, meaning the player is ready to deploy it.

Correct and aggressive use of the DFS is the secret to everything in Karous. Leveling up faster, scoring higher, surviving bullet curtains. Leveling up faster happens because all upgrade pills get bigger when collected inside the DFS radius and all soaked bullets help to power up the shield. Scoring higher then comes naturally since all kills and bonus items are multiplied by your total power level, which consists of the sum of all weapon levels and is permanently displayed in bold red fonts on the top right corner of the screen. And naturally the more enemies you kill or bullets you deflect outside or inside the DFS the faster it recharges for subsequent use. It’s very fun to finally get the hang of it and be able to anticipate attacks while diving head on into the mayhem of DFS manipulation. This creates a very strange phenomenon, at least for me: in the pursuit for higher scores, the first half of the game ends up being harder than the second because weapons aren’t powered up enough to destroy everything without incurring in more dodging and consequently more risk. Get them all above level 50 and see how awesome and more comfortable things get. One example is the shield being capable of deflecting bullets back to their sources as damaging arches of doom.

Another important factor in the gameplay is the nature of icons and power-ups. Most of them appear in the form of a tiny blue triangle that gives you a few bonus points, which when slashed will grow bigger and even change to a completely different item. Special items can be a temporary auto shield (shield active while shooting/slashing), DFS instant recharge, extra level-up experience, partial or full extra life (rare) and a yellow triangle that turns all on-screen bullets into items (very, very rare). There’s also a specific carrier that will always release a level-up unit or a speed item, which come in random fashion but can be cycled with slashing so that you can take the desired one (blue level-up → green level-up → yellow level-up → speed-up → speed-down → blue level-up).

Intro + I only use the blue shot!
(courtesy of YouTube user King Arthur Pendragon)

Playing Karous leisurely is perfectly possible, but obviously a laid back approach will never result in higher scores. Upon starting a credit the player must choose between three game modes (Easy, Normal or Hard) that are progressively denser in bullet count. All bosses can be milked to some extent, but don’t take too long to kill them or they’ll time out and deny you lots of points. By the way, going out on a killing spree is the best way to level up faster because every big enemy or small enemy wave is only spawned after the current one has cleared the screen or been completely destroyed. Since every stage has a definite course, you can have more or less enemy waves at the end of a level depending on how aggressively you play. This means that the faster you move the better chances you have at scoring, therefore two or three speed-ups are absolutely necessary to cause more havoc even though it gets a little harder to micro-dodge. Score extends are granted at 50 and 200 million points across all game modes.

Initially slashing is by far the strongest attack, but once the shield reaches level 50 it also starts being utterly destructive (trust the power of the shield!). The only downside to the DFS one needs to worry about is its ability to suck every single item within its radius into Karous. Having a speed-down sucked in by accident is not only bad for maneuvering, but it also means one less upgrade point to a weapon and the total power level, so a little less points in the end. You can try to slash it out of the DFS area but it doesn’t work all the time.

By choosing Hard mode the player is entitled to fight a True Last Boss if (1) all secret Milestone icons are collected and (2) the 5th boss doesn’t time out. The Milestone logos are always located on the ground and must be unlocked with a specific weapon by targeting a secret area that glows when hit. Logos in stages 1 and 2 are unlocked with shot, stage 3 with the sword and stages 4 and 5 with shield. An interesting trait about Karous is that there are no ground targets except for the Milestone secret logos and the 3rd boss, almost as if Milestone had tried to mimic Alfa System’s approach on the Shikigami No Shiro series. There’s an overall soft nature to graphics and sounds, with a techno-inspired soundtrack that fits the game but isn’t on par with previous Milestone efforts.

Greed can be a bitch, that’s why in the end of my time with Karous I incurred in a little restartitis. I kept getting hit stupidly on the first level. The Dreamcast disc offers many tinkering options and proper TATE, the only thing that baffles me is that the save function only saves your option preferences, not high scores (memory card > data save is worthless). The game was re-released later in compilation discs for the Nintendo Wii and the Xbox 360, also receiving a 3D makeover for the Nintendo 3DS.

My best result on Hard mode is below, having beaten the TLB with a final power level of 238 experience points. 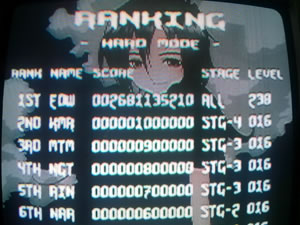