I have no idea of the actual extent of the success the first Fantasy Zone achieved on the Master System, but it must have been quite remarkable. Especially in Japan. After all, Fantasy Zone II came out first for the Master System before being given an arcade release and seeing ports for other platforms, and if anything that says a lot about how much Sega believed in the sequel. The good news is that part II isn't merely a repetition of the first chapter, and in my eyes is just as engaging and addictive. Besides, every port and further revision based on this cute little game corroborates this assessment.

As expected, the world of Fantasy Zone II is as colorful as before. The action never stops, perils await at every corner and giant bosses try to stop you at least twice during the course of a credit. The only feature that declined a little is the music, but that's debatable since it's still filled with good tunes, yet not so catchy anymore (that song from the shop stays in my head for hours every time I play though). Opa-Opa is back and must destroy another batch of evil generators that are plaguing the beautiful areas of the Fantasy Zone. While the basic mechanics stay the same (one button fires, the other drops bombs), stage lay-outs are non-linear and require players to travel through warp gates across 3 or 5 panels within the level. Only when all generators/bases are destroyed you're allowed to face the boss by entering the red warp gate.

I already mentioned somewhere that dismissing this series as fluffy and childlike is a mistake. With this chapter it isn't any different, since a mere couple of credits is all it takes to get sucked into the fun and keep coming back for more. However, when I found out there's an item that gives you autofire I was even more excited about it. I say this because there's a huge difference in playing the original Fantasy Zone with and without autofire, a distinction that almost loses the purpose here.

Each stage of Fantasy Zone II must be cleansed of enemy bases that pollute the scenery with all sorts of crazy enemies. Movement is allowed in both directions, and the scrolling can either be sped up by moving closer to the sides or halted by touching the ground. Some of the destroyed generators will uncover the warp gates, but most of them will release money bills. Regular enemies release gold coins, which are worth less than money bills, all values varying from stage to stage. Cumulated money is unrelated to score and is used to buy items in the shops spread around the stage, which provide several levels of upgrades for speed and firepower (some of these are temporary and last only 20 seconds), as well as a few survival aids.

Contrary to what we had in the first game, here all shops are static and can be accessed at all times (with the exception of the 3-panel shop of the final level, so don't be trigger-happy there). The assortment of items in each one is always the same, but in order to get the best upgrades players must look out for the hidden shops in stages 3, 5 and 6. There it’s possible to purchase autofire (auto beam) and power enhancers. “Power” is actually another name for health, indicated by a red gauge that can be made larger by getting red bottles and completely refilled by getting blue bottles. If you manage to get all bottles you’ll end up with a very generous life bar by the end of the game, allowing you to withstand lots of hits every time you’re respawned after dying (the upgrade is permanent). The main catch of the game is that autofire appears only in two of the hidden shops and is forever lost when you die. Remember that every time you buy an item its price will increase in the next purchase, with the prices of some items inflating even if you don't buy them.

Uncovering hidden shops is done by targeting their spots (shots disappear and you hear the sound of something being hit). A few precious items are also hidden in the same fashion throughout the game and can help you go the distance, namely the red/blue bottles (the clock gives an extra 30 seconds to any temporary weapon that's currently active, other than that it's useless). The moment I figured out the preciousness of the hidden bottles I planned the whole game around them because they’re both life and money savers. Speaking of which, in this installment money does not decrease in value no matter how long you take to kill generators or enemies, which of course opens the door for milking. I haven't tried to test it to the point of noticing any real climb in enemy aggression, but in any case it's a very time consuming and risky way to try and get more points.

All the improvements made to the classic gameplay serve to balance out the slightly tougher challenge, and in that regard Fantasy Zone II is a successful sequel. Not only is the power/health meter a very welcome addition in the long run, but the way shops are handled cleverly compensate for Opa-Opa’s sluggish default speed. Dying in later levels can be aggravating, yet it’s always possible to fetch a nearby shop and start getting back on your knees. Slowdown will occur when the screen gets crowded, but it's never game breaking in any way (actually it might be one of the best examples of "correct" slowdown in an 8-bit shooter). Flicker is minimal, I've only seen it during the fight against the 4th boss. 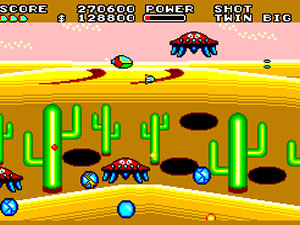 Before playing the game I was a bit wary of the warp gate gimmick, but the truth is that it works. Navigation from one screen to the next is fluid, fast and elegant. It allows for more backgrounds within the level, thus lending an alleviated complexity to the game while beefing it up in terms of graphics and length. Expect a very linear difficulty progression and a horde of zapping creatures as you reach the second-to-last stage, prior to facing rematches against angrier bosses in the final level. The last boss reserves a surprise for Opa-Opa and justifies the game’s subtitle The Tears of Opa-Opa. He's a bit underwhelming, but at least some of the previous bosses are quite impressive creatures, such as Bombdran in stage 4 and Halorings in stage 7.

My strategic approach in Fantasy Zone II was very simple. Get the normal engine and twin bombs on the first shop. Get the hidden red bottle in the 2nd stage. In the hidden shop of the 3rd stage purchase auto beam, big shot and another red bottle. Fill the expanded power meter with a hidden blue bottle in the 4th stage. Get twin big bombs and the red bottle in the hidden shop of the 5th stage. Purchase another red bottle from the hidden shop in the 6th stage (plus a bargain extra life for $100) prior to filling up the power meter with the hidden blue bottle. Get the final hidden red bottle and preserve health in the onslaught of the 7th stage. And, finally, spend all the money I can on extra lives and do my best to survive against the boss rush of the final stage. Each extra life in reserve upon completing the game is worth one million points, whereas all the remaining money is multiplied by ×10 and added to the final score. The game does not loop.

Below is my final 1CC result, with no additional auto/turbo fire. Next in the series I'll tackle either the NES port or the arcade version. 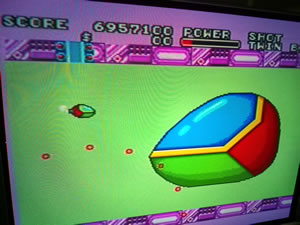