I have always been a sucker for shooting games that dare to switch the scrolling direction or bend camera perspectives. Some of the most famous titles that did this with varying degrees of success include Salamander, Axelay, Galaga - Destination Earth, Philosoma, Einhänder and Thunder Force VI. In a way Astebreed is the apex of such deviations from the norm since it has everything I hinted at above plus a plethora of awesome cinematic transitions, and for story geeks a rather encompassing and convoluted sci-fi drama as well.

Suffice it to say when I downloaded Astebreed on Steam I was amazed at the graphics and the spectacle of particles, lasers and explosions. It was like seeing a crazy mix of Sol Divide and Raystorm, and this coming from an independent/doujin development team is nothing short of amazing. Sure many of the aspects that define Astebreed were inherited from Edelweiss previous effort Ether Vapor / Remaster, but the overload provided by the mecha motif and the boost in speed and frantic action lend the game an amazing sense of visual flair, something that's easily conveyed by trailers and all the footage available on the Internet. I heard that on top of some minor improvements the later version released for the Playstation 4 is even more polished.

Anyway, as we can see we're pretty covered in style when talking about this game. Lots of it. But what about substance?

It takes some time to see what the gameplay is about here. For a while I was completely lost amidst the chaos and the constant radio chatter of the characters, a feeling that subsided more or less when I was able to clear the game. Then I tried to learn it more properly and, if possible, ditch the idea that Astebreed is nothing more than a mess of a game in beautiful packaging. 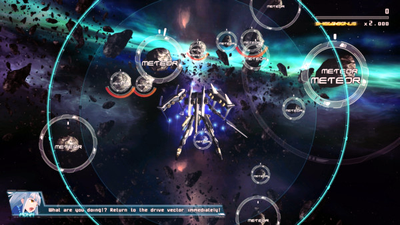 The most important thing to do after starting up Astebreed is head straight to the tutorial section in order to learn how to use your arsenal. And then return to it once you think you have figured things out. In a nutshell, all you need to control your mecha is four buttons (I'll point out my Xbox 360 controller configuration). Two of them provide two shot / lock-on types: scatter shot / spherical lock-on (button A) and focus shot / conical lock-on (button B). Tap these buttons to fire your regular shots, hold them to throw your lock-on nets and release them to launch homing shots on the locked targets. The lock-on nets are reminiscent of Soukyugurentai, but it's important to note that despite being harder to use the conical net provides much faster lock-ons on stronger enemies.

With the blade attack (button X) players are able to draw the mecha's sword and inflict up close damage, as well as block most regular bullets. Keep tapping it for a combo or hold it while pressing a direction to perform a blade dash attack, a move that also makes you invincible as you zap from one point to the other. There's a brief recovery time after a full combo or a dash is unleashed, so you need to consider that in crowded situations. The last input is the EX attack (button Y), which can only be used when you have a full yellow gauge below the character. When no lock-ons are in place it triggers the spin EX attack, a powerful blade burst that leaves behind a golden barrier that protects the mecha from damage for a little while. If you activate the EX attack with active lock-ons the robot will target all of them himself.

The mecha will acquire a golden glow whenever the yellow gauge mentioned above is full. Note that this gauge is refilled automatically but can be refilled faster by destroying enemy bullets with the blade attack. The blue semicircle gauge that's below represents health, and if it gets depleted it's GAME OVER. Luckily the technology of the mecha suit is designed in a way that if you refrain from taking further damage it will automatically repair itself. And that's how you're able to survive the barrages of zakos, ships and alien creatures that flood the screen with the most diverse forms of attack. Speaking of which, as long as enemies don't display a red aura it's safe to touch their bodies.

Combining all the above inputs and resources can be a daunting task, one that will only become natural with a good deal of practice. Fortunately Astebreed is one of those games that comes with a wide array of practice aids and performance tracking devices that help you do that, especially if you want to achieve better scores.

I don't know why anyone would turn off the score display, but it's possible to do that in Astebreed. It doesn't make any sense because how else would you measure your playing finesse credit after credit? The first rule for scoring in this game is to not get hit. Every time that happens the tension gauge in the upper right corner is emptied and the multiplier is reset. This tension gauge rises whenever you're shooting at or locking on to enemies, whereas the multiplier is applied only on enemies killed with blade and EX attacks, which in turn decrease the tension gauge (important: you can shoot and use the blade at the same time). The multiplier receives a shield bonus of ×2 whenever the shield gauge is full or recovering, maxing out at ×16. During boss fights it's mandatory to kill them as fast as possible in order to collect your scoring rewards, if the timer reaches zero you get no points at all.

Beautiful and fluid are two qualities the graphics of this game are often associated with. The entrance over the ocean below cloudy skies is as gorgeous as it gets, as is the camera shifts that guide the player from one area to the next. The difficulty curve is overall steady, making you deal with all sorts of hazards at different heights and distances. That's when you notice the rail shooting sections are actually the easiest ones because there's no need to dodge anything. Strangely enough, some enemies are dispatched by your mecha during the animation pieces, making you wonder why the game didn't allow you to take the matter into your own hands. Most cinema and conversation intermissions can be properly skipped, and those that can't kinda lose their purpose when you choose to disable the in-game dialogue, creating some odd empty spells here and there.

Even though Astebreed does not come out as overly difficult at first contact, beating it will require some careful play in its second half. Conquering the game, on the other hand, demands heavy memorization due to the constant damage you're prone to take from the increasingly tougher enemy swarms. In that sense the game strikes a feeble balance between casual and hardcore/dedicated play, as you can see from the scores in the online leaderboards. No matter what kind of player you are the experience is fast, furious and often exhilarating when you're able to connect a good string of attacks, dispatch a boss with a ×16 multiplier or get through a whole stage unscathed, which is of course easier said than done.

Extras in Astebreed include local and online leaderboards, achievements, playtime tracking, stage select, art galleries, the aforementioned tutorials, lots of visual/input/audio customizations and a separate special stage (the Prologue) where the very start of the story takes place while you have the chance to learn the gameplay foundations. Once the game is beaten a new mecha is unlocked for players to choose, but the differences are purely aesthetical (the default one is called Xbreed, the unlocked one is called Astebreed). As for my personal evaluation, at first I was knocked off by the amount of hits I could take and not die, then it slowly started to make sense the more I paid attention to the scoring side of things. It's an elusively devised carrot for dedicated players, and I salute the developer for doing that. I remained humble on my 1CC objective, which was to score more than 20 million on Normal difficulty, and here's the result playing with Xbreed: