Ever since my first contact with Dodonpachi a few years ago I have always wondered why so many shooter fans had it in such high regard. By that time I wasn’t as mature as I am today, and had strong feelings of disgust towards the famous scoring system that supposedly required pixel-perfect positioning for the player to succeed at scoring well. Yet here I am, after having successfully looped the game and come to grips with Cave’s fundamental bullet hell shooter.

Arriving two years after Donpachi (the first chapter), Dodonpachi boosted everything about that game to a new level, in aesthetical and functional ways. Even though the ship roster remains the same, visible upgrades were made to the animation, explosions, bullet count, overall speed and scoring possibilities. The key word is intensity, a characteristic that would become synonymous with Cave as time went by. Shooting intensity in Dodonpachi can be enjoyed in lots of ways. Genre outsiders marvel at the amount of bullets, average players often try to play for survival and the more experienced can’t help but get involved by the intricacies of the scoring system. More often than not this leads to an interesting love/hate dilemma since the game rewards dedicated players who try to perfect their chains and punishes those who lack the patience to do so. In a sense, if you want to squeeze the juice out of the game you inevitably need to learn and follow predefined routes throughout the stages. This definitely creates a wall for many people since not everyone is willing to surrender to such a strict gameplay demand for the sake of a higher score.

Another reason to properly learn Dodonpachi is that if you want to loop the game playing for survival doesn’t cut it. Since my main goal was to loop the game I decided early on that I would chain and achieve the minimum hit count for the loop (keep reading). As a consequence I also learned how to score higher and came out of the experience with a new mindset, as well as a better understanding of the mythical status that surrounds this particular shooter. Dodonpachi might as well be the single most important arcade danmaku – the one that cemented the genre’s evolution and paved the way for all other companies to follow. Disregarding personal taste towards the scoring system, if there's one thing for which the game should receive honest criticism is the repetition of the music after stage 3 (it's a great, pumping soundtrack though). And maybe the change of the announcer, since voices are now female and are restricted to boss confrontations and the start of the game. 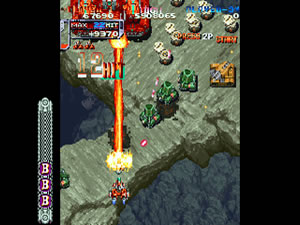 The basic gameplay did not change from Donpachi and ideally only two buttons are needed. Tap the fire button to get the regular Shot (S) and hold it to generate a constant energy stream known as Laser (L). Hit the bomb button to either activate a screen clearing explosion (when used with shot or without firing) or a deadly beam of destruction (when used with laser). The Saturn port is friendly to all players by mapping Shot and Laser to different buttons, so the final controller layout is A (laser), B (bomb) and C (shot). Regular items brought by destructible carriers or bunkers on the ground are P (power-up) and B (extra bomb). MP (maximum power) is only granted when the player continues once the credit is over.

The first additions to the previous formula appear at the ship selection screen. It isn’t enough to just choose ship type (A/red/straight shot/faster, B/green/bending shot/medium speed or C/blue/spread shot/slower). Now players must choose between Shot (S) or Laser (L) power. S gives a slight boost to shot and reduces its power only by one level upon death (laser returns to default), whereas L boosts laser power a little and provides only one level of laser power loss when the player dies (shot gets back to default). Therefore ship selection in Dodonpachi is always specified with ship type and power emphasis, as in B-S or C-L. From what I’ve seen the most popular choices are A-L and C-S.

Further changes relate exclusively to the much expanded scoring system. Even though the famous chaining scheme remains the same (killing enemies in succession with very short gaps between each kill), it’s been expanded in a way that most stage layouts allow for full stage chaining. One of the crucial points of improvement is that “lasering” a large enemy freezes the chain and keeps it alive. Additionally, a vertical bar below the score counter allows for quick chain tracking, so you know when the chain is going to break if you refrain from shooting. 13 hidden bees per stage must be uncovered by hitting their spots with laser, and provided you can get all of them without dying the bees in the next stage will have higher values (cumulative bonus). Adding surplus bombs to a full bomb stock activates the “maximum” bonus and applies a multiplier to the score, continuously increasing it as the game progresses. This multiplier is incremented as you get more extra bombs, which makes it the most simple (don’t die and don’t use bombs) but second best scoring technique besides chaining. Bonuses at the end of stage reward the player for boss kill, stars collected, boss hit count, and “no miss” (not dying). Boss hit count is different from chaining hit count in that it’s only applicable to bosses, getting slowly reduced instead of instantly zeroed if you don’t hit them with laser. Secret flower fields in stages 2 and 4 are the most obscure bonus items, with the hardest ones being the 10 million reward for each remaining life when the second loop is beaten.

As the previous paragraph makes it clear there’s much more than meets the eye in the scoring system of Dodonpachi. Deeper aspects will only surface for those who really dedicate themselves, such as the double damage inflicted by the laser aura that surrounds the ship, the fact that a fully powered ship will allow longer gaps in between hits while chaining, boss parts that release bigger stars or bees, “planted” bugs that can freeze a boss (4th  one) or the power-up item breaking a laser chain if you’re not within at least 1/3 of the screen close to the enemy you’re lasering (this doesn’t happen when you’re fully powered, so you only need to be careful during the first two stages).

Extends are fixed at 6 and 20 million, and a 1UP can be extracted from the middle turret of the battleship in stage 3 if you manage to destroy all of the ship's lateral boxes without bombing. A big departure from Donpachi is the fact that Dodonpachi has no rank at all, it just remains brutal regardless of performance or deaths. The game is keen on mixing all sorts of bullet patterns to stop the player from succeeding. Aimed bullets, overlapping spreads, concentrated bursts, slow-moving bullet clouds, pulsing lasers, kamikaze enemies, you name it. Dodge, herd, point-blank, bomb. Obliterate multiple waves with the laser, kill some enemies faster to avoid getting overwhelmed by a bullet barrage, let a few of them live to sustain the chain. I find the difficulty slope to be quite reasonable as the action gets increasingly more frantic, but the second half of the game can be particularly brutal to newcomers. In a nutshell, building up consistent strategies in a game like this is a lesson in memorization, dodging and coordination between tapping and holding (even though you can use separate buttons for shot and laser on the Saturn controller I still find myself using just laser and tapping a lot).

Looping Dodonpachi isn’t a matter of just beating the first loop. Besides doing that you still need to fulfill one of the following conditions: lose up to two fighters; score at least 50 million points; collect all 13 bees in four of the six areas; get a maximum hit count of at least 270 hits (type A), 300 hits (type B) or 330 hits (type C). The second loop is way harder and comes with a lot more bullets (no suicide bullets though), and if you manage to beat the game a second time true last boss Hibachi will show its hideous face. Obviously my aspirations did not include a fight against Hibachi... Since my ship of choice was A-L, I decided that my passport to the 2nd loop would be achieving at least a 270 hit chain in the 2nd stage. The dedication paid off and I must tell you, it felt good to fully chain the 2nd stage for the first time. At that moment Dodonpachi finally clicked with me as a great shooting game. Of course it still took me some time to do it consistently, and that leads me to a definitive conclusion: in the land of games that live up to the old saying of “practice makes perfect”, Dodonpachi is right at the top. Opportunities for improvement are nearly endless. As a side effect, playing without proper focus can be extremely frustrating due to severe restartitis. And the Sega Saturn is especially friendly to restartitis victims because of the soft reset feature (A+B+C and START).

Many people look down on the Saturn port as an inferior way of enjoying Dodonpachi because of the slightly pixelly explosions, and that’s a real shame. The truth is that besides this single downside the game is extremely faithful to the arcade, as far as my experience with MAME goes. TATE is available and loading times are non-existent once a credit is started. You even get a dedicated Saturn mode with an extra starting level (dubbed stage 0, with remixed music from Donpachi), slower/easier patterns, no loop, Hibachi at the end of the game and a few nice tweakables (select loop 1/2, adjust chaining tolerance, etc.). I initially thought Score Attack mode allowed stage practice, but it's just like the Arcade mode only without continues. The Playstation port of Dodonpachi has its own issues, which shall be addressed as soon as I have spent some time with it.

This time I was able to reach stage 2-2 with the A-L ship, playing in TATE. I maximized the chains in stages 1 and 2, however my strategies for stage 4 weren't reliable at all and often ruined my runs. I had constant problems with the spawning green ships of stage 3 but if I got past them I could no-bomb up until the 4th boss. Stage 5 is a clusterfuck of herding, tap dodging and corner-bombing. Stage 6 lacked proper training so I just tried my best not to die there in stupid ways. This was the result: 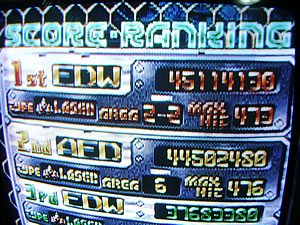 Next: Dodonpachi Daioujou on the Playstation 2.
Posted by Edward at 7:48 PM