For some time now video games have always exhibited messages aimed at photosensitive people, warning about the need to beware of visual stress or even risks concerning epilepsy seizures. However, how many times have we actually paid any attention to them? Fortunately I'm not affected by that at all, but if you are I strongly advise you to take these messages seriously if you intend to play Rym 9000.

Rarely has a shooter taken aesthetics to such limits with regards to visual stimulation factors such as flashing, shaking and color manipulation. Besides, the whole art design is also very dark and mysterious, as are the interfaces within the game itself. Just to have an idea, the borderline abstract visual elements and the whole feel of the game remind me of things like Polybius or the most experimental works by artists like Bill Sienkiewicz or David Lynch.

In simple words, Rym 9000 is a bloody weird shooter. The weird aspect goes beyond the visuals since the game also subverts a few features commonly associated with the genre while demanding players to figure out many things on their own. Even the instruction manual of the retail release doesn't tell you much, instead focusing on detailing the crazy story about a treasure hidden on Earth's moon and strange aliens watching over our planet as you fight your way through the game. My first advice is to press → at the start screen to go to the Options and set Effects to "reduced" so that the game becomes less of a deranged mess (this also turns off the vibration function). While we're at it, from the start screen ↓ selects the initial level from the ones you have already reached, ← takes you to the leaderboard/achievement lists and ↑ starts the actual game. Minor note: as much as I tried I couldn't figure out what Focus mode does in the Options screen.

Quickly moving, visually dirty backgrounds scroll by as you dart into the clouds and then to outer space. Only a single input is used in the whole game so fire away with any button that does that in the controller, just note that whenever you're shooting the speed of the ship is reduced. Except for the final level all others share the same basic structure, including the parts halfway into the stage where you have the chance to pick one out of two new weapons. Lives work like this: if you get hit, the shot pattern will revert to a single double stream; after a short while a + item will appear, and as soon as you grab it you'll recover your current weapon; if you get hit before grabbing the + item you'll die. Deaths will take you back to the beginning of the level, with the same score and weapon you had when you first started it.

Rym 9000 is unique in many ways, but the way it treats deaths, as described above, is particularly elusive. From a credit perspective it means a GAME OVER / CONTINUE combo because it forces you to restart the level while preserving your previous score. This also means this isn't a shmup with infinite lives, where you could whore out the system for scoring advantages. The only way to see an actual GAME OVER screen is by quitting the game or finishing it. If you get confused when you get to that point (as I did), be aware that quitting is accomplished by pausing and holding ↓ for a few seconds until the down arrow at the bottom fills up.

In a rough comparison, Rym 9000 could be described as an assortment of caravan levels joined in a single game where you have only one/two lives per level. Gameplay is based on successive waves of different enemies coming up from all sides. They all arrive surrounded by a white aura that quickly turns to yellow and then to red. Destroying them when they're white returns more points than when they're red, so there you have the basis of the scoring system. The aura thing does not apply to bosses, but speed-killing them also gives you more points. What's particularly interesting in this case is that speed-killing is made easier by using the shot pattern that's active after you get hit since it's much more powerful than all other shot types, except for the Arrows weapon you acquire in stage 4. The risk/reward relation is clear: for better scoring possibilities you need to be at the brink of defeat, kinda like an alternate take on the same gimmick of Gunnail.

Unless you've memorized waves and attack patterns, being close to death isn't a good idea at all. Enemies are keen on displaying erratic movement, with all sorts of distinct behavior such as bouncing, homing, splitting and rotating/exploding, as well as being downright harmful when destroyed (some of them can't be killed or you'll be automatically hit). With very few exceptions, bullets and lasers come with huge sprites as an obvious compensation for the visibility mayhem. At the end of the day it works, provided you can cope with the aggressive visuals. One minor glitch I noticed in the scoring system is that the points you get for defeating the first boss aren't correctly applied so you end up scoring a little less than you should there. Fortunately that doesn't seem to be the case for rest of the game. 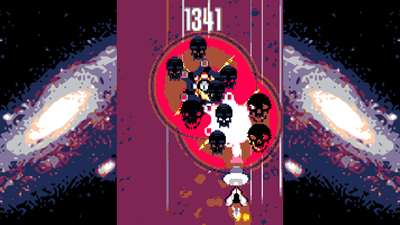 A moment of relative quiet amidst chaos

With such an otherworldly art design and all these quirks in the gameplay, Rym 9000 surely justifies being called unique. On the other hand, even though the game's identity is very clear it's hard not to think of it as yet another ambitious indie effort whose claim to fame is trying to make our eyes bleed. There's so much visual noise that snapshots can't do it justice, you need to try out and experience its particular kind of rush yourself. And unless there's more to it reserved for the future, the addition of a complex backstory is all but a misguided way to add content to the game, especially when you notice that the core experience is such a short one.

The disc release includes a TATE mode and several wallpapers if you decide to play it on a regularly oriented monitor. Even though the electronic music doesn't push the limits of the format in the same measure as the other features in Rym 9000 do, it still fits the tone nicely and represents the main extra of the retail Limited Edition in the form of a soundtrack CD. If you don't want to go for the retail release, the game is also available digitally for the PS4 and for PC fans/users by means of the Steam digital platform.

The online leaderboard available on the PS4 is very strict and allows only ten places, as seen in the picture below. My pure 1CC run (no deaths and stage restarts) was achieved by taking the following weapons: V in stage 1, Tricky in stage 2, Y in stage 3 and Arrows in stage 4. I think they're the best choices all around for screen coverage and power (note that some enemies are more vulnerable to certain weapons). As expected, playing this game felt different from the norm but it was equally fun. 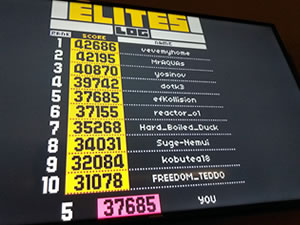