For a couple of reasons I almost feel sorry for Space Defending Force SDF, a game that's also frequently referred to by its Japanese title Uchuu Keibitai SDF. The main reason is that it was never released out of Japan, so it was practically relegated to obscurity by default. Given the fact that SDF came out in one of those square-shaped cartridges (the same format used in Dezaemon) and uses a special chip for improved graphics, I can somehow understand its confinement to the Japanese market. What baffles me is the absence of a scoring system in such a nicely crafted shmup. Getting through this game is one of the most interesting journeys to be had in the Famicom/NES library, so for fans of the genre the lack of a proper scoring system is truly a sorry letdown.

Since there's no need to worry about numbers and such, all you'll ever see when playing SDF is the action itself. There's no HUD, and not even a mention to stage structure as the screen fades into the next level when the boss goes down. The attract mode shows a silent animation that details the ship's capabilities, and once you press start a brief take-off sequence leads the player to open outer space. Soon you notice that the horizontal span of the level stretches beyond what you see in a single screen, an aspect that's ostensively present throughout the game and adds to the challenge in several distinct ways.

Button B fires a single shot, so try to get a turbo controller for better enjoyment. Button A only becomes active after you take the first weapon power-up. These are released by destroying capsules that materialize in specific places and consist of H (spread shot), V (side shot) and L (laser shot). Other items you might come across are S (speed up), Ƨ (speed down) and E (extra life). Once you get a first power-up you'll also acquire two attachments that lock onto the ship at the front and provide a minor degree of protection against regular bullets/lasers. By pressing A these attachments are propelled outwards and latch onto the ship's rear, changing the weapon to the ship's original firing pattern. In essence, button A switches attachment positions + the choice for shot/weapon mode, but there's a little more to that.

Maximizing firepower is achieved by taking three consecutive power-ups of the same kind. For the second power level, shot mode also fires two side missiles. For the third (max) power level, these missiles acquire a very efficient homing ability. Since attachments are what actually gives the power to the ship, if at least one of them is destroyed you won't be able to fire neither the current weapon nor the missiles when in shot mode, meaning you'll be temporarily stuck with the default shot until you get the next power-up. Attachments are lost if they receive too much damage while latched onto the ship or if they hit more powerful enemies when travelling towards the other side of the ship upon pressing button A.

Managing weapons and resources is of course just one part of what the player needs to cope with in Space Defending Force SDF. The game makes great use of noble inspirations such as Gradius, R-Type, Star Soldier and Dragon Spirit, blending their elements with successful results in each and every stage. From stage 3 onwards, for example, you need to weave through several stretches of narrow passages while dealing with all sorts of opposition with varying attack methods. Ricocheting lasers, heat-seeking drones/missiles, aimed/fixed bullet spreads, splitting divers, closing gates, you name it. The enemy gallery is kinda eccentric, ranging from insects to mechanical and alien creatures. On that regard the game is very reminiscent of titles like Salamander / Life Force and Abadox, even though SDF carries an all around more ominous and ambitious tone. 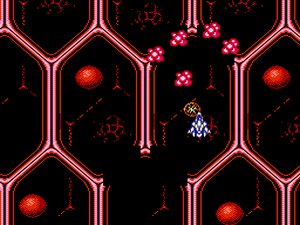 One of the best traits of SDF is its difficulty progression, with the glaring exception of stage 2. It severely breaks the pace of the game, but fortunately the action that comes afterwards excels at keeping players on their toes. Some intermediate checkpoints are guarded by mid-bosses, however the final stage is especially cruel since it's very tricky and has just one single checkpoint up until the final boss, giving you no upgrades at all if you die while fighting him. The best weapon against bosses is definitely the laser, which is devastating at point blank distance. On the other hand, the maxed out side shot (V) is awful because the firing streams bend up and down when you move. I avoided it like the plague, except when in shot mode because shot mode behaves the same regardless of the weapon you're using.

Technical excellence supports the varied design and the top notch challenge in SDF, with absolutely no slowdown and just minor negligible instances of flicker. One thing that bothered me a little is the way the attachments "dance" around the ship and take longer to latch if you are on the move, which had me killed more then once while I waited for the desired weapon to activate. I eventually learned how to circumvent these situations, of course, and I also learned a trick to attract power-up capsules if they appear in tight places or too far from my reach: just press START and see it happen. The act of pausing in this game is accomplished by pressing SELECT.

My time with Space Defending Force SDF has ended, but I couldn't recommend it more if you fancy some decent 8-bit methodical shooting. There might be no scoring system in it, but the unlimited continues are great for old school practicing and the tension that builds up in the final parts of the game certainly adds up when going for the 1CC. 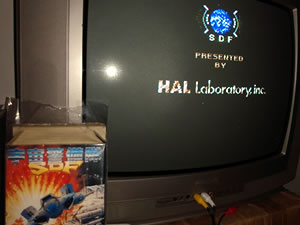