Danny Phantom was a relatively successful cartoon that aired on the Nickelodeon channel from 2004 to 2007, starring a teenage boy endowed with ghost-like supernatural powers who fights to protect his hometown from otherworldly menaces. One of the two video games to have come out from the show, Danny Phantom - Urban Jungle is based on a specific episode that gets reenacted in glorious shoot'em up fashion, full of all sorts of different weapons and colorful backgrounds. It only came out for two Nintendo handheld systems, the Game Boy Advance and the Nintendo DS.

The DS version is of course the more accomplished of the two. Speaking of this particular version, while relatively competent in the art design front the game was obviously tailored to its target audience and doesn't demand much from the average player, serving solely as a breezy diversion from more serious shooting endeavors. Danny's two best friends are the main supporting characters and interact with him in between levels throughout the whole game, which should prove amusing for fans of the show at least. In both the cartoon and the game's story, an evil entity called Undergrowth attempts to turn the city into a warped jungle with an army of unfriendly ghosts. It's up to Danny to capture them and free the enslaved citizens.


Let's meet Undergrowth, shall we?
(courtesy of YouTube user IGN)

Each stage/world is comprised of two sections guarded by bosses and a bonus area where you must fulfill different tasks to improve your score. Danny shoots with button A and deploys his ghost powers with button B. These ghost powers are always selected before the stage section starts, from a gallery that starts off with the three most basic special attacks: the "phasing" (invencibiliy/invisibility), the boomerang and the thermos, a ray that weakens and sucks ghosts (yes, just like in that famous movie with Rick Moranis). Other ghost powers are unlocked as you get through the game, such as the ghostly ice/fire and other types of ghost-busting devices. Cycling through ghost powers is accomplished with button L, but you can also fire them directly by tapping the corresponding icon in the touch screen.

Besides the default main weapon (N), you'll also come across the piercing shot (P), the homing shot (H) and the laser (L). Non-default weapons are obtained by shooting and cycling the corresponding incoming icon. The departure from the norm here is that you must activate all of them in every single stage. There's also a charge shot that's activated by quickly tapping the shot button and holding it until you see Danny's hand glow. It's a very powerful attack that varies according to the current weapon. Green capsules upgrade the firepower and are also needed in every single level if you want to have a maxed out shot (three capsules needed). Buttons Y and X cycle through the available weapons, a selection that can also be made by means of the touch screen.

As we can see, there's no shortage of resources in the gameplay and all buttons are put to good use. Unfortunately, the sheer number of survival aids is more than enough for you to cruise through the game on your first sitting, as was my case. What's left as a challenge, if you decide to do so, is exploring a few techniques to score higher. A chaining system is in place for successive enemy kills, where every enemy destroyed adds to a multiplier combo (approximately two seconds max between each kill). Besides, at the end of every level you're rewarded for the amount of ghosts/enemies you obliterated and also for speed-killing the boss. 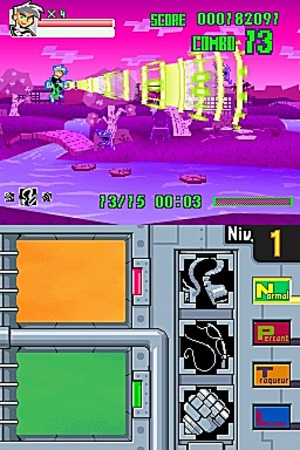 I ain't 'fraid of no ghost

More than the lack of challenge, the aspect that undermines Urban Jungle's appreciation the most is certainly the repetitive gameplay. Little is to be expected besides taking down wave after wave of cannon fodder, the occasional medium-sized ghost and then the boss. Once you figure out how efficient the homing weapon is for crowd control there's little incentive to get out of your way to survive (for bosses the best one is the laser though). In a few levels you need to go around obstacles and walls, but that's it.

A glimpse of something more demanding appears in the area where you need to phase across buildings that block your whole path or else you'll take damage. No phasing available though? Don't worry, ramming across these buildings won't seriously impact your health meter. Another glimpse of diversity appears in the 4th world, which turns the game into a rail shooter where Danny pilots a spaceship. Gameplay rules change a little bit there, but everything is still as easy as the previous levels. What's left for real variety, strangely enough, are the bonus areas. The tasks you need to accomplish there are all different from each other. In one of them, for example, you're only allowed to soak bullets, whereas in another you're supposed to play for as long as you can if don't let a determined amount of ghosts escape.

All things considered, Danny Phantom - Urban Jungle at least serves as a good introductory shmup for kids. The cartoon seems to be a charming one from what I've quickly seen, so the fan service also represents a good part of the enjoyment factor. Beating the game unlocks a few extra things in the opening menu, such as a sound test and a boss battle mode that I didn't care to try. I just played two full credits in the main game on Normal difficulty, and the results for both are shown in the following high score table. 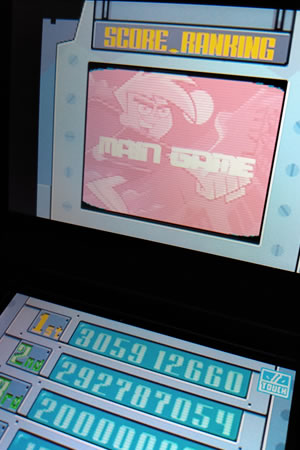