Playing Atomic Robo-Kid can feel weird, and I don't mean the sensation brought about by the push-scroll bidirectional control scheme. The way the stages are broken down and how the bits and pieces of the gameplay tie together give me the impression that there are too many ideas thrown in a shooter that doesn't have enough substance in the end. It's visually quite close to the arcade original by UPL, but something got lost in the porting process. The result is a silly sci-fi adventure with lumbering weapon functionalities, a game that's certainly one of the contenders for most awkward entry in the Mega Drive shmup library.

In the future one of Earth's colonies is bombarbed by radiation from outer space and all creatures suffer hideous mutations. Out of the ashes of the wasteland rises this chubby little robot that looks like a trash can, and he is of course the last hope of the survivors against the alien invaders. As the story unfolds he talks with AI stations to learn more about his mission, meanwhile the player needs to learn how to deal with an assortment of weapons/resources in order to defeat clusters of enemies and huge bosses across 18 areas. Don't fret about the number, it's there just to give a false impression of length. All areas are really short and you only fight five real bosses along the way.

Controls work with button A for shot and button B for weapon select. Weapons and items are obtained by shooting at crystals to change their status and then collecting the desired ones. The only exception is the first couple of crystals right when the credit starts, which only serve the purpose of allowing the character to fly. As you proceed other crystals appear, such as the red ones for weapons: F is the fission gun (which is actually an improved version of the default shot), M is the missile (slow, but explodes upon contact and blocks bullets), 3 is a 3-way needle gun and 5 is a straight large shot with limited reach. Yellow crystals enhance other aspects of the character: S is the speed-up and R stands for rensha (temporary autofire), but there's also the single yellow crystal with no symbol (four of them provide protection against one hit, for a maximum of three possible shields). 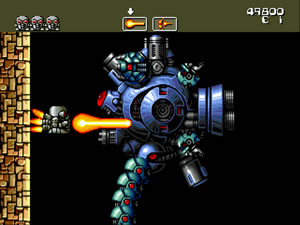 Facing the evil clutches of a Governor

Stages in Atomic Robo-Kid are divided into several short sections prior to a big boss that must be fought inside a large chamber. After the boss you get into a laser duel against another enemy robot in a smaller room. Everything is very linear, with only a few labyrinthine levels that require more careful navigation and a few sections where you're allowed to choose one out of two different routes. Some graphics, textures and backgrounds appear more than once, but the art design and its eventual repetition are the least of the problems that mine the appreciation for Atomic Robo-Kid. The same can be said about the slightly grating nature of the music and the sound effects.

There are many details in the gameplay that irk me. Our hero the boy in a trash can, for instance, automatically starts walking if contact is made to the ground. Pressing B will make him jump instead of choosing a different weapon. B is also responsible for locking shot direction for some precious strafing capability. I wonder why the developer couldn't simply get rid of the walking aspect, as well as put the locking function in the C button.

Item management is also another intriguingly problematic aspect of the gameplay. Getting a single speed-up by shooting crystals can be a chore in itself. To stand a chance against later bosses you definitely need it, but there were credits where I couldn't get it at all. Sure you can purchase one in the shop owned by a dinosaur-like creature that appears only twice in the game and trades items for lives, but unless you know it beforehand you'll probably hit the poor thing to death thinking he is an enemy. And how odd, in the duel against the small robots you have no speed-up activated yet if you die there you'll come out of it with no speed-up if you had one. Regarding the lack of autofire (the R item is only temporary after all), a turbo controller helps but try to get one with separate functions for each button, or else you won't be able to lock shot direction with button B.

Retreating in order to avoid enemy fire is often necessary, but beware of enemies respawning right away in the same places. The interesting thing is that you can't die by touching them, but on the other hand they become so numerous in later levels that the simple act of picking up a crystal can be a minor challenge. That said, since Atomic Robo-Kid for the Mega Drive lacks the timer from the arcade version and you can wander around forever killing enemies, the scoring system is by nature utterly broken. There's no sense talking about scoring, except for the extra lives you get at 30.000 points and at every 50.000 points afterwards.

In replaying this game it dawned on me how limited and botched it actually is, which is sort of sad given the nobility infused in the story, particularly the ending. It's just all around goofy and unengaging, and I wonder if the PC Engine version called Atomic Robo-Kid Special suffers from the same symptoms. I should try it and figure that out soon.

I did not try to improve my previous high score and went straight to the end on Normal difficulty (note that the default starting difficulty is Easy). A turbo controller at hand and no milking at all resulted in the following 1CC outcome, which I now log into my achievement archive for great justice. If you want to get a picture of your final score remember to pause as soon as the last boss dies or you won't see it anymore. 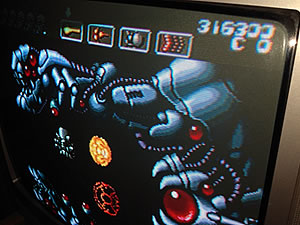