Cloud Master, also known as Chuka Taisen, is the port of an arcade game of the same name. It stars a kid named Michael Chen, who flies on a cloud and shoots down enemies in ancient Japan. Michael is an apprentice and aspires to be considered a real "cloud master" by his enderly mentor. In order to achieve such honor he must get through five levels, destroying the incoming threats and defeating big bosses along the way.

The simple concept of this game fits the capabilities of the Master System much better than it did the arcade platform, especially when we consider design aspects such as the repetitive tiled backgrounds. Cloud Master on the Master System is an extremely colorful port that's rather competent in adapting the source material, with similar gameplay mechanics and faithful representation of both the enemy gallery and the stages (unlike the full-scale makeover seen in the PC Engine version). It's also no pushover, as one would imagine from the cute visuals. Hit detection is fine, a little flicker appears here and there and a sliver of slowdown might happen in crowded areas. 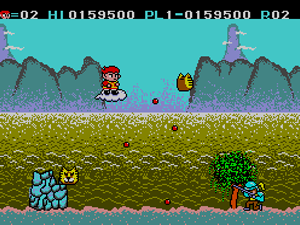 Flying over the Koh river

Controlling the kid on a cloud is extremely simple. Press button 1 to shoot and button 2 to fire a secondary attack. Upgrade items are released by destroying full enemy waves or specific enemies and consist of P (main shot power-up), S (two main shot power-ups), F (speed-up, means "fast"), A (autofire) and E (extra life). The evolution process of the main shot is very similar to that of Taito's own Darius II, in that each power-up adds another layer of power/spread to the current firing stream. When maxed out it assumes the form of a wave shot with regular bullets on the sides. Looking at it closely, the whole feel of the game and the upgrade system is like an amalgam of the first two Darius games.

Equally as important as the main shot is the secondary attack that's obtained by defeating a mid-boss and entering the door that he/she leaves behind. In there you'll be able to choose one of four special attacks, which remains active until you enter the next mid-boss door or die. Secondary attacks are automatically upgraded every time you enter one of these doors, even if you switch to a completely different type. Options include a rotating fire guard, spinning dragon fire, crescent arches, 2 or 3-way fireballs, a 4-way x-shaped mirror attack, bouncing/trailing fireballs and a scattering bomb that explodes when hitting the ground. I might be wrong here, but the impression I get is that the Master System port has more secondary attacks than the original arcade version, on top of allowing you to switch them even when at maximum power (doors don't stop coming when beating midbosses).

Bowls of ramen, pigs with cannons, flying pig heads, bird flocks, large birds with human faces, tigers, pandas descending from clouds, dragons, turtles, monkeys, mushrooms, etc. With some exceptions there's always an animal or mythological creature appearing as basis for the enemy gallery. Regular enemies fire regular bullets, whereas midbosses and bosses shoot lightning bolts or round projectiles that force you to move more carefully due to their big sprites. From my experience at least three speed-ups are needed to fly around with decent maneuverability, just watch out for bullets that tend to travel slowly and might get mixed with backgrounds. You don't die by touching the short mounts of dirt at ground level, unless you get crushed by them at the edge of the screen.

Even with the hardware constraints of the platform it's nice to see a few animation details preserved, such as the character's eyes blinking and his hair and the cloud he rides on curling as he's moving around. On the other hand, graphics fade out before boss fights so that the Master System can handle their large figures. Eastern motifs rule the soundtrack, which fits the game but is otherwise pretty unremarkable.

With two checkpoints per level, Cloud Master gets increasingly trickier to recover from death as the game progresses. Unless you play with some kind of turbo function doing it without the A power-up can be extremely demanding. Note that the rate of fire isn't the same at all power levels, which is the main reason why I avoided maxing out the main shot. If you keep your shot pattern at only two red blue balls or the spread before that you'll achieve a much better firing rate than the one you'd get with the maxed out wave shot. This is particularly important during boss fights, and you also need to consider hitting them at their weak points (mostly the head, or the belt for the shogun boss). You can kill them a lot quicker if you hammer them at point blank distance in between their attacks. Fun fact: the shogun is the last boss here instead of the dragon, which was demoted to guardian of the 4th level.

Besides the 1UPs you get with items, score-based extends are granted with 30.000 points and then at every 200.000 points afterwards. Attention: once you defeat the final boss and receive the definitive congrats from the elderly god figure there's a brief GAME OVER screen, but the game doesn't stop there. Wait a few seconds and it will start again in a second loop. The difficulty increase in further rounds is very subtle, the main difference I noticed is that the E item for extra lives does not appear anymore.

My best credit for Cloud Master on the Master System ended in stage 3-5. The unusual detail in this version, as you can see in the picture, is that the current score is on the right side of the panel and the high score is on the left side. It had me confused more than once as I was trying to figure out point values throughout the game. 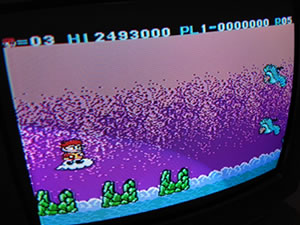