One of the best part of the good old Atari 2600 days for me was spending long spells playing Missile Command. Those who tried it know how different it was from other games in the genre, since it's a fixed shooter leaning towards vertical orientation. Missile Command wasn't about shooting everything in sight though, for it demanded from the player both aiming and timing skills. I always found it very amusing, but didn't see the same concept very often in subsequent shooting games. As of now, the only other title besides Global Defense that I remember using it is Bio-Ship Paladin on the Mega Drive.

In Global Defense, also known as SDI (Strategic Defense Initiative), your mission while piloting a satellite is to protect bases in several planets from the solar system, starting on Earth and travelling beyond the rings of Saturn. Every stage is comprised of two "halves", the offensive one and the defensive one. In the offensive half the screen scrolls horizontally while enemies attack from all possible directions. The defensive half sees you defending a base from space attacks, very much like Missile Command itself. Moving the satellite around the screen and shooting down enemies will feel odd at first sight. Button 2 shoots the plasma cannon according to the position of the firing cursor, but the satellite remains stationary. To move it it's necessary to press button 1, but then the firing cursor will remain stationary. Does it seem to be difficult? Do you miss the ease provided by the analog sticks of today's controllers? Afraid of a game that's over 20 years old? 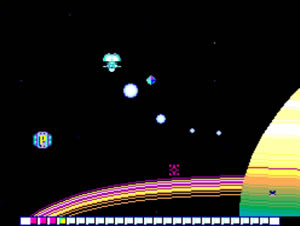 Arriving in Saturn during an offensive half

There isn't just a single way of dying in Global Defense. First, getting hit by a bullet or a fighter/satellite will make you lose a regular life. The success of your mission, however, is gauged by the damage meter in the bottom of the screen: during the offensive half every time a flying enemy leaves the visible area unharmed a tiny dot of this meter will be filled (a very characteristic noise rings whenever this happens). The damage received is carried on to the defensive level, where every missile that hits the base will increase it further. Now here's the bad news... If you play badly and the damage meter gets full, the game ends in a big nuclear explosion, regardless of how many lives you have!

I wish there were more than just two BGMs that alternate throughout the whole game, even though they're not bad. Simplicity is the rule when it comes down to graphics, but at least there's no flickering. Just like the game's scrolling, the satellite's starting speed is very slow, which makes you yearn for the yellow power-up for better maneuvering capabilities. Other power-ups include the white (damage reduction) and the pink one (power upgrade). No matter how the satellite stands in the end of a defensive half, in the next offensive half the player always starts slowly. While generally each power-up appears only once in every stage, there are instances where a certain power-up won't appear at all.

What surprised me most in this little game was the neat scoring system. Upon completing a defensive half, you get bonus points for destruction rate in each enemy category (missiles, satellites, fighters and bases). If you manage to kill all enemies from an offensive half you get a bonus of 20.000 points and an extra life, skipping the defensive level and going directly to the next offensive assault. Failing to obtain another PERFECT in this next offensive half will yield 5.000 bonus points, but another consecutive PERFECT will increase the special bonus by 10.000 points, giving you the precious extra life and advancing you to the next offensive campaign. And it keeps going like that. This opens a neat range of scoring possibilities that invites the player into perfecting the gameplay for higher scores, something rarely seen in an 8-bit shooter.

Global Defense gets fairly tough during the last couple of stages, so here's some general advice I can give to the brave ones who might want to check it: take advantage of memorization for better positioning of the satellite; you can fly over missiles, asteroids and planetoids, they don't do any harm at all; pay attention to very small bases in the asteroid belt, they might go unnoticed and spoil the PERFECT bonus; sometimes it's better to just keep the firing cursor fixed while moving the satellite in order to deal with multiple enemy waves.

Poor presentation aside, I enjoyed Global Defense for its unique gameplay (and related challenge) derived from Missile Command. Only after I beat it I learned that the original arcade game is also available on the PS2 under the name SDI, as part of the Sega Ages series. It will be interesting to play it after experiencing the Master System version first.

I believe I got 3 or 4 PERFECT offensive halves in the high score below. On a last note, besides celebrating victory with a sight of the Statue of Liberty surrounded by flying pidgeons, you're also awarded with a bonus of 100.000 points upon game completion. 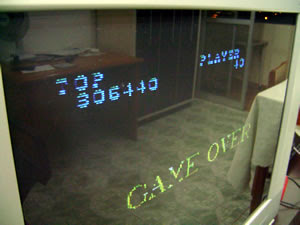