Though not really prolific or widely remembered by shooter fans, Visco Corporation did manage to release a few interesting shmups throughout its lifetime. Some of them were almost rip-offs of more famous titles (as is the case of Storm Blade and its resemblance to Sonic Wings, for instance), while others fared better in originality terms (Vasara and Vasara 2, games that even garnered a minor but devoted fanbase). Amongst their many outings for the Neo Geo arcade platform there were two shmups that stand in the middle spectrum of the abovementined scale: Andro Dunos and Captain Tomaday.

Unlike the standard horizontal approach seen in Andro Dunos, Captain Tomaday offers a distinct and eccentric take on the vertical shooter formula. Aesthetically it feels derivative of the cute'em up style pioneered by Konami in series like Twin Bee and Parodius, but it certainly bears a charm of its own thanks to the offbeat gameplay. After all, it's got one of the most bizarre power-up mechanics I've ever seen, which is in line with the premise of the game and its unsung hero, a tomato that gains life after falling into a vault of unknown chemicals – to the surprise of the scientist who witnesses the phenomenon. This is all shown in the colorful intro, for great cinematic effect. 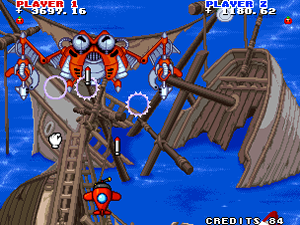 Endowed with full-grown limbs, Tomaday uses his fists to punch enemies into oblivion. Button A tosses his left hand, button B tosses his right hand and button C switches/rotates battle formation between horizontal and vertical once you've acquired a companion/clone. Punching comes with autofire, and if you use only one fist the other one will start glowing until it charges into a powerful glowing anvil as Tomaday counts one - two - three. Pressing the button then unleashes this power punch. Since his fists need to travel a certain distance to return to him, the action of punching is more efficient the closer you are to the enemy.

Upgrade and bonus items are released by hitting harmless tomato cans. If you hit the items they will bounce, so it might be necessary to completely refrain from shooting in order to collect them (if they bounce for too long they'll eventually disappear). Most items are diamonds, Ts or random stuff (popsicles, french fries, pies) that give you a few extra points. The really important ones are the multiplying tomato, which adds a clone who flies in formation with the original Tomaday, the mutating pill that serves as the power-up that turns him into a new form and the single 1UP that appears halfway into stage 4.

This is where Captain Tomaday starts to confuse the player. The first mutating pill makes you shrink, the second one makes you large and the third one turns the character into a green lizard that uses his tongue to attack. The lizard form already breaks up the basic gameplay based on punching and charging, but that's only the beginning. What happens is that for each mutating pill taken you actually assume a different form, in a total of more than 15 incarnations besides the default tomato one. Some of them are downright bizarre, such as a monkey that throws bananas, a plant vase, a carrot and a rabbit. There are also intermediary forms that appear if you get hit in special incarnations, such as the baby that returns to winged Tomaday form upon collection of the next pill. The very final upgrade turns you into a spear-shooting devil (or angel, if you're player 2). Another pill taken when in this final form rolls the upgrade sequence over and sends you back to default Tomaday.

The catch in the gameplay is that later forms don't actually translate into best firepower. Figuring out the most efficient ones is somewhat essential for survival, especially when the most aggressive enemy waves start appearing. Captain Tomaday is a challenging shooter that unfolds in waves, and no wave will ever appear until you have cleared the prior one. While that certainly helps in memorizing the game, dying can pretty much kill the credit if you're not able to power back up quickly. Speaking of which, whenever you're controlling two Tomadays each character must be upgraded separately. Beware once they've reached their desired forms, because if you accidentally take another pill the upgrading process inevitably continues. There's no way to power down unless you take 17 mutating pills or kill the character and get a new clone to power him back up, which are obviously no feasible choices. Note that lives are only lost if both characters/clones in a formation are killed.


Someone's forgetting to press the other button...
(courtesy of YouTube user Gamers Universe)

Advancing through the colorful backgrounds can be a delight if you fancy games with cartoony and goofy designs. The music is equally as cartoony, sometimes even childish. Each level has a specific theme, starting with a gothic forest and continuing with a pit full of trash, a river/pond, a special bonus area with no stage boss and a last section in outer space. Whenever the scrolling stops during the level you must prepare to face a special enemy sequence or a mid-boss, in a wide array of organic and mechanical foes alike. Collision detection is fine, but the act of hitting targets can lead to a weird stutteting frame-based slowdown that definitely needs some getting used to. The slingshot effect is present, so take special attention on enemies (mainly mid-bosses) that have the nasty habit of ramming into you faster than what you'd expect.

An aspect that might detract from the fun factor is the juggling mechanic, which doesn't add anything useful to the gameplay. It often screws up the upgrading process and can cause all sorts of problems for greedy players such as myself. Restartitis is right around the corner, after all the bulk of the scoring system comes from destroying complete enemy waves and collecting the bonus tokens. Each level completed also gives you a confusing bonus for destruction ratio, but as much as I tried I could never get a 100% bonus in any stage whatsoever. My favorite form combination for firepower is the plant vase (great power and very nice spread) plus the kendama toy that shoots a single red ball that's devastating at point blank distance. Both don't have charged punches, but to be honest the charged punch is a pretty useless resource.

Captain Tomaday was only officially available for the MVS format, but I played it with an AES conversion. It recently got a budget re-release for the Sega Dreamcast, but as of now I don't know how both versions compare. In my solo time with the Neo Geo game I lost no lives when achieving the high score below, playing in the MVS difficulty. For those who're into it, I assume co-op play must be quite an interesting experience. 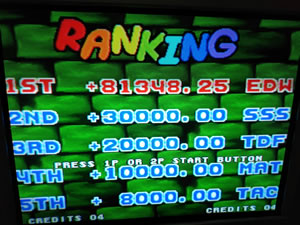