There was a Sonic Wings arcade machine available in my neighborhood when I was a kid, I just can't remember which one. It's been a long time since I last saw the game in action so it's no surprise that, having now beaten the PS2 version of the first Sonic Wings, it striked me as the actual start of the Psikyo way of shmup development. I had no idea it is so damn close to later series such as Gunbird, Strikers 1945 or Sengoku Ace - despite being a Video System title, it has the Psikyo brand all over it. This happens because the team behind the game left and funded Psikyo a few months later, shamelessly recycling the same successful idea over and over. While the new company experienced relative success, the fact that they were always copying the formula created in Sonic Wings is in my opinion rather disappointing.

Don't get me wrong, for those who breathed the arcade scene in the beginning of the 90s, or even had the chance to experience the SNES port of the game, Sonic Wings (or Aero Fighters in the west) was nothing less than stellar. It was fresh, quick, action-packed and allowed the player to take control of up to 4 different characters, with the possibility for co-op play with a forced 2nd character for each main one. The most recent port appeared for the PS2, courtesy of the budget Oretachi Game Center series, released only in Japan. The purpose of the series is to provide the closest possible rendition of real arcade games from the old days, with standard goodies included with every package - Sonic Wings was the 6th entry in the series. This disc has a tate mode available, but unfortunately I can't vouch for how accurate a port it is... 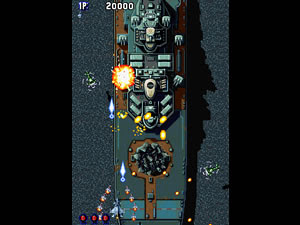 As a playable PS2 game, Sonic Wings is your basic vertically scrolling shooter. The mechanics that would become a Psikyo trademark appear in the power-up scheme (3 for maximum, automatically power down once after a while), bombs and stage lay-out. The first 3 stages are shuffled and the last 4 are fixed. As a fighter from either USA, UK, Sweden or Japan, you have to initially bomb all other nations (hence the 3 starting randomized stages), which means you never play the level related to your pilot's country. All fighters have different weapons, bombs and speeds, and soon enough you'll find one that suits best your style of playing. My favorite is Kohful, the Swedish guy. He's overall stronger and faster, with the minor drawback that you cannot use his bombs one after the other - it's necessary to wait for the missiles to leave the screen, and this is a major pain during the fight with the mid-boss in the last stage. Argh!

Graphics are decent but not outstanding, and so is the music. There's an emphasis on the military theme, which might fall apart completely when you get to the last boss and is presented to the flying monkey instead of the evil rocket. Sincerely, the guys who made the game must have been on acid or something to come up with this. Everything is fairly easy and manageable until you reach the last stage, when things get really nasty and bullets will swiftly crush you as if you were an insect. The only help you can get is a decent bomb reserve (maximum of 6) and an extend that's granted with 200.000 points. There's not much regarding scoring, just shoot everything and collect the icons that resemble money (dollar, pound, kronor and yen) for 1.000 points each. All excess icons are also worth 1.000 points. There's no apparent rank, so the game will get more difficult regardless of survival or life stock. That also makes it hard to recover once you die in later stages. Bomb, bomb, bomb! 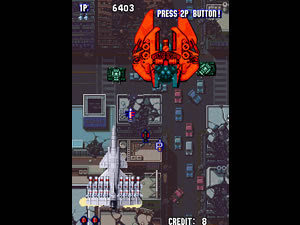 Inside the box for the PS2 CD, game publisher Hamster has included a music mini-CD with the game's soundtrack (22 tracks with 22:46 of total time), a mini-DVD (with several ads for the 6 first games in the series, a music demo and a complete - albeit poor - demonstration run) and detailed colored manuals/folders that include info on the original arcade board. The game itself is presented in a bare bones fashion, down to the INSERT COIN message - to add credits just press SELECT, and to go to the screen for OPTIONS just press L1+R1. Everything there is in Japanese, and here goes a quick translation for present and future reference:

And here's my high score on NORMAL, playing with Kohful (loop 2-3): 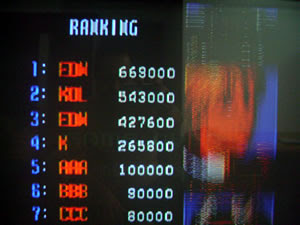