With 34 Megs stamped in its cover, Andro Dunos is probably the smallest shmup in the Neo Geo library, but it doesn't mean it's less fun than its peers. Coming out in an age where 16-bit was at its peak, the game is pure 16-bit bliss and surely looks like a slightly beefed up version of any average shooter developed for the Mega Drive. I tried to come up with an example for this comparison, and the closest one I could think of is Whip Rush. Andro Dunos, however, fulfills its purpose with better results, raising itself above the average-looking style of the whole package to deliver great fun, especially for those who appreciate the innocent good old days of the classic spaceship shooters of the 90s.

What initially caught my eye in Andro Dunos is the ship's design, which resembles a sleeker, thinner Zig fighter from the almighty Zero Wing, sans the cool side pods. The abundance of colors and the variety of weapons I saw while watching the attract mode were also irresistible hooks, so last week I thought it was about time I had some fun with it. Then came the common dilemma of most Neo Geo shooters: since they rarely have autofire, how would I be able to keep my wrists and fingers in good shape for whatever I had to do with them after playing Andro Dunos? Fortunately for myself I was able to score a Hori Fighting Stick Neo II a while back, so I was ready to go once I switched that turbo function on (there are almost no options of controllers with turbo fire for the Neo Geo, and the few ones are rather hard to come by).

I tried to find out what "Andro Dunos" means, but even the game manual offers no clue about it. What I did learn, besides the backstory on invaders from outer space and the last hope of mankind (you, the player), is that the ship is called Yellow Cherry, with player 2 being named as Red Fox. Watch them with more detail as they take off once you press start and glimpse the tutorial! 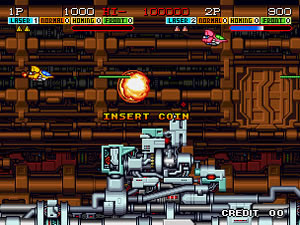 Yellow Cherry and Red Fox fight for peace in the galaxy

There are four types of weapons at your disposal in Andro Dunos, and they're properly named type 1 to type 4. Similar to Toaplan's Hellfire, they're cycled at the press of a button: type 1 is the straight shot, type 2 has an emphasis on the rear shot, type 3 offers a set of X-shaped diagonal laser blasts and type 4 activates a useful albeit week spread pattern. Power-ups are handled by taking the items that cycle according to four colors, each one of them upgrading a specific portion of the ship's firepower: S corresponds to the main power-up, B powers up the little lasers, M upgrades your guided missiles and U adds auxiliary pods that block bullets, whose behavior depends on the type of weapon you're using. There are 7 power levels for item S, while all others max out at level 5. The levels of each one are shown right below the score counter.

Choosing which aspect of the weapon to power up is kinda cool, but it's always a nice move to boost the main firepower as fast as you can (S). As soon as you take the first S you're entitled to use a powerful charge shot that once deployed consumes one level of the S upgrade. The charge shot is related to the current weapon type, and is very effective to take down more powerful enemies. Unfortunately, using it is rarely an advantage over the act of tapping the fire button, hence the overall preference for using auto/turbo fire in Andro Dunos, at least for the first half of the game. There are certain parts in the second half where a single charge blast is enough to get rid of troublesome enemies, such as the hovering ship in the beginning of stage 7. The challenge increase becomes quite noticeable in the 4th stage, which is when rank starts kicking in. Surviving longer and earning extends (100.000, 200.000, 400.000, 800.000 points, etc.) and 1UPs (one in stage 4 and one in stage 6) is what basically pumps up enemy agression - the only way to get it back down is to die until you have only a few lives left.

Scoring is pretty straightforward, but there's a small end-of-stage bonus for taking the B items that appear from specific enemies you kill. There are seven in each stage, and upon grabbing them all not only you get the maximum possible bonus, but you also earn one upgrade for each of the four power-ups. Minor milking in a few bosses is feasible, but troublesome because these demand a good deal of dodging and focus.

Overall Andro Dunos is rather generic in its space theme, but this broad scope also gives it liberty to embrace a much welcome variety in the level design. Among other stuff, you fly over a moon and its caves, cruise through mechanized corridors and outer space sections full of meteors, get into an organic stage with moving walls and invade a cave scenery that visibly borrows from Darius, fighting a handful of bosses and mid-bosses along the way. With the exception of the first stage, the action is never dull and definitely keeps you on your toes in the last couple of levels. The scrolling direction shifts a lot and because of this some enemy shots might unfairly take you off guard. The best way to deal with them is to be aggressive and avoid standing still, attitudes which are obviously enriched by some mild memorization.

I didn't find the soundtrack as effective as the other aspects in the game, but I can't say it's bad in any way. Though less shiny than the rest of the Neo Geo's shmup library, the solid old school atmosphere and the nice learning curve help make Andro Dunos a winner regarding what matters most in a game, which is being fun.

In my best run I reached stage 2-4, dying horribly soon after I passed the mid-boss. I played in the MVS difficulty setting and used autofire, disabling it only in two moments during the whole game: when stage 7 starts and when the last boss reaches its final form. 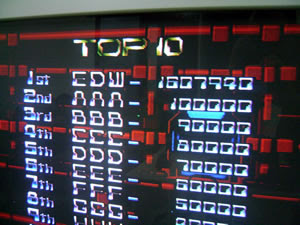