We gamers all have fond memories of certain video games that came to become personal favorites in our childhood, and more often that not they're not even the most famous titles of the time. Gyrodine on the NES is such a game for me, one that my small group of friends would always play in our weekend competitive gatherings. At the time we played it by means of the Brazilian unlicensed version released by CCE, and only much later in my gaming life I was able to come back to it with the original Famicom cartridge.
It was also much later that I knew this is actually the port of an arcade game of the same name, and a rather important one since it represents the absolute origins of Toaplan. You can see many aspects that would later appear in Tiger-Heli and Twin Cobra, for example. Although seemingly simple and plain on a first glance, Gyrodine is actually quite varied in its minimalistic design, as was the game that served as its main inspiration, Namco's classic Xevious. I prefer Gyrodine myself though.
The choice for a helicopter as the player's avatar fits the gameplay like a glove. Press B to shoot your aerial gunfire, press A to sweep the ground with a machinegun and press A + B to fire a heat-seeking missile that tracks the closest enemy ahead while following the chopper's movement. The action is seamless as you fly over land and ocean shooting down enemy choppers, jets, rockets, missiles, tanks, submarines, ships and turrets in all possible configurations. It's indeed that simple on paper, but the execution quickly escalates into a fierce battle where your anticipation and dodging skills will be severely tested. 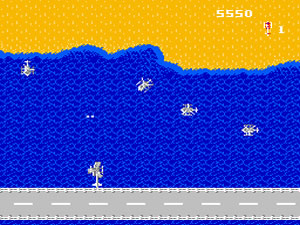 Battle of the choppers
Your main shot sort of follows the chopper's movement, and finding the rhythm of how this works and where and when to fire the heat-seeking missiles is the turning point to really start enjoying the game. In general this port is graphically very faithful to the arcade source, even though it shuffles the elements that make up the levels into a relatively different experience. Never mind the lack of in-game music and the meek collection of sound effects, what's most important here is the action and the way it keeps you coming back for more after each failure.
What's particularly neat about this port of Gyrodine is that in challenge terms it's superior to the arcade version. While the original flowed with no interruption in the scrolling whatsoever, there are three points where the Famicom version will halt for you to fight a huge turret-ridden boss while flying enemies swarm on you from all sides. You must either destroy all turrets or stay alive for at least 15 seconds for the game to continue into the next territory. This is the reason why I consider this version to have three stages, even though there's no explicit division between them besides the abovementioned scrolling halt. After the third one the game loops but the difficulty remains unchanged.
It's very easy to dismiss the game as a pretentious Xevious wannabe that's too hard for its own good. Perhaps if the item gallery was less secretive it would have a better shot at pleasing shooter fans. The tiny little men on the ground are easy to understand, they either give you 100 points or act as a screen-clearing smart bomb (the red ones), but all of them can be killed by your own ground fire. On the other hand, many people might play the game for a lifetime without realizing there are speed-ups to be uncovered and collected at several points, which greatly improve your maneuvering capability and make the game far less intimidating (if you manage to not die, of course). In order to find them you need to sweep the ground with the A button in specific areas, spraying your machinegun over a horizontal line because the exact location of the item is always a little randomized.
A light red mermaid grants you 10.000 points just for being uncovered (you don't need to fly over her), while a deep red mermaid gives temporary invincibility (as indicated by the duration of the brief musical cue). The white mermaid is the speed-up, and for the whole time you're flying at a faster speed a different characteristic sound will be heard. The additional catch with both the invincibility and the speed-up is that you need to collect the mermaids, and you need to do it quickly because they disappear quite fast. Other secret items exist in the form of a squid (at least it looks like it) that's worth 5.000 points and a gray moving stain which unlocks a flock of ten red animals that if completely killed is worth 10.000 points.
Justice on the blades of a powerful helicopter
(courtesy of YouTube user Espaciodejuegos)
As such in games of this nature, dying is frequent but fortunately there's a nice extend routine that starts giving extra lives at 20.000 points and continues with 50.000 points, with subsequent extends registered at every 50.000 points. Besides the bosses, the hardest parts in Gyrodine come when the most dangerous types of enemies overlap. Of course there are still many areas where the game keeps you on your toes all the time, such as the one where you need to fight invisible tanks. The action unfolds with no slowdown whatsoever and also no flicker, which is nice.
My advice whenever there are too many attacks on screen is to focus on the aerial enemies first and only going for ground targets when you've safely cleared most of the flying hazards. And if you're using a turbo controller only activate turbofire on button B: by doing that a single tap on button A will shoot a missile without interrupting the main fire, and both buttons pressed will make ground sweeps and missile launching much more effective.
I feel very happy to have finally conquered the loop in this game. Of course I thought I'd be able to do it again, but unfortunately I had to abandon the credit once the score maxed out at 999.990 points, as seen in the picture below. I had just beaten the second boss by then, so I guess I can consider that this was achieved in stage 2-3. 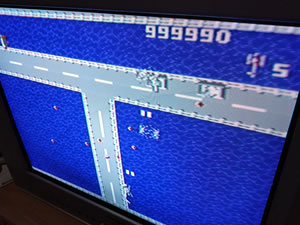