By 1988 Konami was already a force to be reckoned with in the world of video games. Speaking of shooters only, the Gradius franchise was in full throttle, with notable spin-offs Salamander / Life Force and Parodius also kicking off their own series and carving their names into shmup history. It was then that Thunder Cross came out without much of a splash, almost as an experiment in variation on the classic Gradius formula while its most famous bethren flourished.
That's certainly odd conisdering that Thunder Cross is actually part of the Gradius canon. Experienced players will easily spot the graphical/aural similarities and the influence it had on Gradius III, for example. The influence stops there though, since Thunder Cross is much tamer and definitely more forviging with its instant respawn mechanic, boasting a low to average difficulty level that’s certainly more approachable than the difficulty of any Gradius game that came before or after it. The Playstation 2 port is the authentic Japanese version, not the overseas one where the ship starts out with two options and has bombs called lil' baby (!).
This port is also the second-to-last release (vol. 18) in the Oretachi Game Center collection. I guess by the time the series was coming to an end things weren't that good anymore in the quality department, that's why Thunder Cross on the PS2 is widely panned for its emulation job and the fact that a few well-known bugs when playing the game in MAME are also present (keep reading). The package does come with the usual extras from the Hamster series, such as the folder with arcade board info and the mini-discs with the soundtrack and videos including a demonstration credit of the game.
Getting to know Thunder Cross on the Playstation 2
(courtesy of YouTube user ZetaKong)
In order to leave the pea shooter you start with behind, players need to destroy all orange-colored minions in a particular wave or the standalone drones found throughout the game. The released icon will either be a speed-up (S), an option (O) or a weapon, which cycles between V (vulcan), B (boomerang) and T (a 2-way tail gun laser). Stick to the same one to increase its firepower by a small margin. Once you have acquired four options the weapon icon will also start cycling between other alternatives that include L (laser), F (fire) and N (napalm). These new weapons have a temporary effect indicated by a small gauge that appears at the bottom of the screen.
An important detail about Thunder Cross on the PS2 is that a turbo controller is definitely needed since the game lacks an autofire function. Besides the firing button, a secondary input is used to control option behavior: hold it to either contract or expand them in a vertical line above and below the ship. It's a simple resource that proves to be very strategic in several parts of the game. Cruising levels while destroying everything with four options is quite satisfying, as long as you don't die. Deaths strip the ship away of everything you've collected, and can be especially cruel during a boss fight because you're not only severely underpowered but also at the mercy of the sluggish default speed.
For a rather simplistic arcade shooter, Thunder Cross does show a decent level of variety. Simple yet effective parallax layers abound from start to finish, and pretty much all horizontal shooter staples appear. Cave, clouds/skyscraper, fortress and even a high-speed stage are included in the package, which also brings a large battleship level halfway into the credit. Colors are used to great effect and the general flow of the game is that of a relaxed adventure once you figure out the best strategies to deal with the incoming hazards. My favorite weapon is B, but you definitely need to switch to T during the final level. 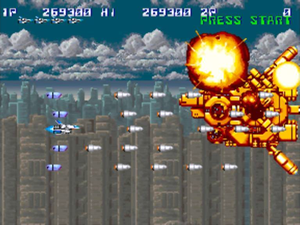 No mercy for the 2nd boss
In the scoring front the game is also very straightforward. Every surplus item is worth 1.000 points, and some bosses can be exploited for a few projectile peanuts. By and large the best way to score higher is keep yourself powered and pummel everything that shoots and moves. There's a secret octopus-like creature that's worth 10.000 points if you can uncover and destroy it. I have the suspicion it might be related to the ? power-up that doesn't do anything but might sometimes appear as a 1UP. Score-based extends are given with 30.000 points and then for every 200.000 points achieved afterwards.
The bad news about this port is that it inherits the same random bugs experienced when emulating the game in MAME. The main problem is that it might freeze all of a sudden during the part where the mothership is about to leave the screen after you beat a boss. I heard it might happen anywhere, in any stage, but more often than not I was a victim in stages 4 to 6, both in the first and the second loops. Another bug that's more rare but happened to me in the final stage was the graphics breaking up, which completely crashed the level by creating obstacles I couldn't circumvent.

Click for the option menus translation for Thunder Cross on the PS2
I reached stage 2-7 in the high score below, playing on Normal difficulty. I did try to improve it for a while but the game kept freezing on me, so I gave up. The final assessment: Thunder Cross is definitely cool and fun (on top of having a badass soundtrack), but the version for the Playstation 2 is probably one of the worst porting jobs I have ever seen in any video game. As for the sequel Thunder Cross II, it still remains unported as of today. 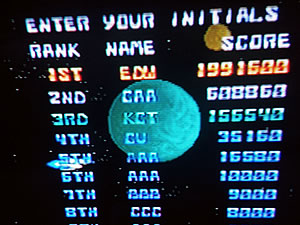