As two of the most famous franchises created by Sega, Fantasy Zone and Space Harrier certainly had their glory days, be it in the arcades or in console formats. There were always hints of both of them being part of the same universe, but Sega never really dared to mesh their concepts and characters in a single title. However, early in the 90s Nec Avenue dared to develop a bastard crossover in the form of Space Fantasy Zone, which would eventually be nixed by Sega on the account of publishing rights and concerns regarding the quality standards of the game.
Even though the official release of Space Fantasy Zone was cancelled, years later the ROM was found online for everybody to try it. It was complete and perfectly playable, yet not properly polished the way a final product should since it presents a few unbalanced traits in the gameplay and has little music variety (the same song is used in all levels) as well as a few audio glitches. Several fan-made physical releases started appearing afterwards, using the art taken from video game magazine previews of the era. I got my copy in 2010, and for what it's worth it's a decently-made bootleg that fits the collection nicely. 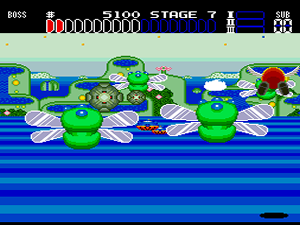 Pocarius stage from a different point of view
In simple terms, this game mirrors the original Fantasy Zone in a rail shooting fashion, with details from Space Harrier thrown in and music that borrows from both games. You see Opa-Opa from behind and most enemies and bosses are taken from Fantasy Zone, whereas obstacles and a few other creatures are inherited from Space Harrier. The first major change in the gameplay is that there are no coins to collect anymore, so all you need to worry about is blasting everything to oblivion as you move forward against incoming enemy waves and pillars. The second major change in Space Fantasy Zone is that you now have a life bar instead of regular lives.
Even though there’s no need to collect coins anymore, players do have the chance to acquire upgrades in the Weaponald’s shop (!) that appears in between levels. The sympathetic lady offers players all sorts of items in different categories in exchange of some of their score. Speed-ups, power-ups, life recovery/extension items and special weapons comprise the bulk of what you can purchase there. All the accompanying text is in Japanese, but the icons should give you an idea of what to expect.
Autofire is implemented by default, and you even get the same shot bending effect from Space Harrier (where shots will automatically hit enemies that are close enough to the bullet’s firing direction). Since button II is used to shoot, firing the extra weaponry you get from the shop is done with button I. All extra weapons purchased are stacked for use one after the other, as seen in the indicator on the top right corner of the screen.
Just like in the game that is its main inspiration, the use of colors in Space Fantasy Zone is nothing short of excellent. The brief intro showing Opa-Opa departing for battle is a nice preamble for an experience that’s visually very charming. However, even though it doesn’t do anything wrong the gameplay does suffer from the poor frame rate in later stages. Things start scrolling by too fast, making dodges even trickier than they normally are. The design sort of deteriorates towards the end, and a clear sign of that is the lack of the traditional boss rush in the 8th level. You get a generic boss and then proceed to the final stage to fight the very last (and kinda lame) enemy.
Three levels of Space Fantasy Zone
(courtesy of YouTube user Fukuten / ふくてん)
Besides getting used to the increasing scrolling speed you also need to cope with specific attacks such as those from missile projectiles, which seem to harm you regardless of their perceived distance. Getting hit over and over often ends up in disastrous results in any level, forcing you to deplete all your score in health recovery items after the boss is defeated. Memorization and continuous practice helps change that, as well as being wise about using your hard earned points in the shop. After a while I figured it was a lot better to just purchase the strongest power-up (level 4) instead of getting the intermediate ones. It makes it easier to kill enemies faster, including bosses. That’s great for scoring because the remaining time whenever you destroy a boss is cashed in as bonus points.
The only other scoring technique in Space Fantasy Zone – besides not taking any hits, of course – is killing complete enemy waves for extra points. Beware of ground obstacles when going for full wave bonuses, since they make you trip and leave you at the mercy of enemies for a few seconds. Despite the somewhat uneven and to a certain extent unfair challenge, the shop mechanic allows players to adopt all kinds of strategies, such as spending all your score in extra additional health and special weapons so that you can limp your way towards the end.
Space Fantasy Zone does come off as an interesting oddity for fans of the main franchise. It's worth a try, at least. Unfortunately my CD has a problem and always freezes once the screen fades after the last boss, so I couldn't see the ending in any of the clears I got in the Normal difficulty (the high score below was taken from pausing the game as soon as the final bonus registered after the boss kill). Note: perhaps as a leftover from debug resources, the SELECT button skips levels entirely; it's certainly useful to practice later stages if you feel like doing it. 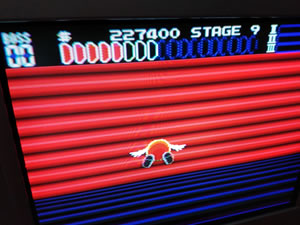