By the middle of the 90s arrange modes in video games weren't an unusual thing anymore. Variations on the main experience were already seen both in the arcades and in the console market, even though in the former they were restricted to alternate boards, region swaps or different upgrade mechanics creating new experiences (famous examples in the case of shmups are Grind Stormer and V-V, as well as Kyuukyoku Tiger and Twin Cobra). Raiden DX was one of the first releases to take the concept of the arrange mode further, using the assets of Raiden II in order to deliver a seemingly similar experience, albeit endowed with an even bigger challenge and much deeper scoring shenanigans.

The Sony Playstation was lucky enough to get a port of this much revered arcade game, which many consider to be the apex of the series. Two versions came out, a first one released by NSI in 1997 and a second one by Hamster in 2000 under the "Major Wave" budget seal. As far as I know there are no differences between them, which offer the full arcade experience at home with a few tweaks and welcome features such as alternate soundtracks, TATE mode and the ability to record/save your latest run on the memory card.

As lauded as it is, Raiden DX is also a tough, relentless and punishing shmup that takes the risk-reward mechanic to extreme heights, a perception that's somewhat clouded by the fact that the game offers three very distinct modes of play. First mode/course Novice is a single stretch of terrain that lasts around 20 minutes and kinda serves as a preamble for the other two modes: Training and Expert. Training corresponds to the first five levels of Raiden II with cosmetic changes only, while Expert consists of eight new levels + a ninth area exclusive to those who can get there without dying and without using any bombs (the famous NMNB acronym of "no miss, no bomb").

My main objective when playing he game was to loop the Expert course. I did get clears of Novice and Training, which do not loop but can be "bridged" starting in Novice if you're brave enough to fulfill very specific criteria. Each mode has its own high score table, so they can all be tackled as unique challenges within the glorified collection of arrange modes that comprise Raiden DX. 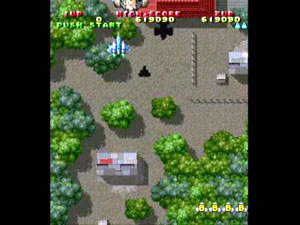 Blue has always been the warmest color in Raiden

In order to fully enjoy Raiden DX the first recommendation I have is going to the options and cranking up the autofire rate to 30 shots/second. Both shot and bomb inputs can also be fully replicated and remapped as you wish in the options. Another detail that might make the difference is the choice of player side: player 1 controls the red ship and player 2 controls the blue ship, and while they do seem similar it's important to note that the red ship moves faster vertically while the blue ship moves faster horizontally. Since sweeping and tap dodging is the bread-and-butter approach needed to succeed in the game, it's very clear that the blue ship is the best choice in any given situation.

Gameplay basics remain the same across all game modes. Item carriers and ground targets release a variety of upgrade items that cycle colors and include weapon power-ups (red for vulcan, blue for straight laser and purple for a plasma latching laser), missiles (M for nukes and H for homing) and bombs (red for nukes and yellow for cluster bombs). Weapon firepower maximizes once seven of the same type are collected, missiles max out with four of the same type and up to seven bombs can be stocked at any given moment. Other regular collectibles include yellow and blue ground medals, the miclus creatures, the hidden fairies that give you a batch of recovery items upon death, the P for instant max power and very scarce occurrences of 1UPs (extra lives).

Knowing the basics is one thing, but playing the game and coming close to mastering it is a completely different story. In the arcade difficulty setting mere survival is enough of a challenge already, while scoring higher actually justifies Raiden DX being more than just a meager reworking of Raiden II. Enemy fire is relentless, speeds up the further you advance and never subsides. The risk of being sniped, cornered and summarily slaughtered is constant, and no amount of practice will ever make you feel comfortable unless you devise very strict routes and strategies to overcome the odds. You blink, you die. You hesitate, you die. There's absolutely no going around that in Raiden DX.

An example of why the game is so punishing is the sole extra life in the 4th stage of the Expert course, released by destroying the mid-screen bunker prior to the boss. If you die before you get there you're simply denied the 1UP item, so instead of granting you a breather in order to move on you're just reminded of how much harder it will be for you to fulfill your mission.

And then there's the carrot on a stick appearing in multiple forms in the scoring system. For instance, this time it's not enough to just collect the medals that are multiplied by your bomb stock for the end-of-stage bonus. Instead of the customary 500 (yellow) and 3.000 (blue) points, every medal uncovered slowly fades in color until it's worth only 10 and 100 points respectively. However, before fading for good each medal glows again for a fraction of a second, and if you collect them right when this happens each one will be worth 3.000 (yellow) and 10.000 points (blue). The same goes for the miclus, which will stop moving for a split second for a whopping 50.000 points instead of the regular 10.000 points if you manage to time it right. Medals still count for the end of level bonus though, regardless of their individual values (micli are excluded from this count).

My loop on the Expert course of Raiden DX

Players have many other ways to boost their score, of course. A staple of the series is acquiring items in excess, and one of the most interesting tactic is this regard is to always pick up extra bombs of the same type with a stock that's already full of them (you get 50.000 points for each extra bomb). Note that the choice of default bomb type is made at the start of the game, according to the color of the lightning on the top of the screen as you decide which course you'll play. Exclusive to Raiden DX is the uncovering of sol towers (in Training and Novice only) and hidden radars (hover over their places to reveal them, destroy for 200.000 points each), as well as the ship alignment bonus after you beat bosses and the extra points you get from speed-killing them. Finally, a special end-of-course tallying after the credit ends gives you a final reward based on enemy destruction, radar destruction, skill and "fighting spirit" (whatever that's supposed to mean).

Applying all scoring techniques to your game is obviously easier said than done. Regardless of your approach some important points that should be considered include learning the firing patterns and the reload cycles of enemies, tapping a lot in between sweeps, bombing proactively, abusing point-blanking whenever possible, using visual cues to engage in particularly difficult sections (gosh, I even used musical cues in stage 7) and having special attention towards those floaters that tend to sidetrack and snipe you before fleeing. I won't even talk about dealing with greed and always striving to be conservative when collecting power-ups, after all everybody has a ceiling for how much risk they're willing to take.

It's clear that Raiden DX can be enjoyed in several different ways, so it's reasonable to say that the fun factor varies accordingly. Even though in its essence the game is just a retake on the elements that make Raiden II, it does come off as a step-up in graphical terms since it's got a bit more color and detail. The soundtrack is awesome, peaking in stage 7 of Expert mode with an absolutely pumping tune that sets the mood perfectly for the final stretch of the game. It's also interesting to note that Raiden DX is the last arcade entry in the series prior to the pseudo-3D visual shift of Raiden III, which is another reason why many people consider it to be the high point in the franchise.

Once I was done with Training and Novice I focused exclusively in the Expert course, all of them in the ARC (Arcade) difficulty. Even though Training and Novice do not loop, beating Training while fulfilling a few requirements (99% enemy destruction, 100% radar destruction, NMNB) will start the Novice course in its 2nd loop difficulty, and if the same requirements are met when you beat Novice you’ll then proceed to Expert mode’s level 6 on loop 3 difficulty, continuing from then on as if you were in Expert mode. And that's how you're supposed to bridge all modes of Raiden DX. A credit played this way will still count as being achieved in the Training course.

If you're purist about having the same exact arcade experience at home, note that beating any course in ARC (continues allowed) unlocks new difficulty settings ARC 2, 3 and 4, which correspond to loops 2, 3 and 4 of Expert mode. By beating any course in ARC 4 you'll then be able to switch "Judgement" to OFF in the options, thus bringing the port close to the arcade original by omitting all radars and the end-of-course bonus in Expert mode. I didn't bother with it all, so I got my high score in the ARC difficulty with Judgement ON while using the blue ship with cluster bombs. It was a remarkably tough and somewhat bumpy ride, but the efforts paid off and I'm quite pleased to have reached stage 2-1 in a single credit (no, I didn't gain access to the 9th level).

Mission accomplished, now I bid farewell and hope to be back soon for Raiden III! 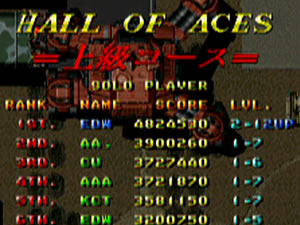