Even if you weren’t exactly into the new 3D trend, I bet all gamers who lived through the 32-bit generation were eager to try any title that dared to present 3D innovations. Even if they were adaptations of games previously released for competitor systems, as is the case of Total Eclipse Turbo, which was both a launch title and a direct port of Total Eclipse from Panasonic’s 3DO. The sci-fi rail shooting adventure set in outer space is pretty much the same in both variations since the differences between them seem to be in negligible details only, except for a password feature in the Playstation version that allows you to start playing directly in later stages.
My copy of Total Eclipse Turbo is the jewel case CD version that came out three years after the original longbox launch release. Once again the idea behind the game is that the Earth is under attack by alien scum, who now aim to turn the sun into a supernova with a powerful mortal weapon (hence the game's title). A lengthy introduction and a wealth of narrated briefing messages tell everything you need to know about the story. You are of course the last hope of mankind, so prepare to fly into all sorts of environments inspired by the likes of classics of the genre such as Galaxy Force II and After Burner.
The game does come with its own flair though, and while it doesn't always succeed it's at least honest in its attempts to provide a genuine rail shooting rush.
A burst of shooting in the Aqueous Major area
(courtesy of YouTube user 10min Gameplay)
There's not much you can do in the main menu of Total Eclipse Turbo, but it's very important to decide early on between one of the four controller configurations available. In Simulation A and B verticals are inverted, while in Arcade A and B they're not. Other inputs consist of shot, bomb, roll left, roll right, accelerate and brake. This definitely seems overwhelming up front, but once I realized that the roll buttons are almost useless things became less complicated. I went with Arcade B myself so that I could have a pseudo racing-type configuration with acceleration and brake on R1/L1.
Each stage is divided into four sections with similar structures. You often start the section above ground, flying over terrain and avoiding obstacles along the way. A blue beam of light pointing upwards is the entrance to a tunnel area which might lead to a way out before the section ends. When flying outside you can guide yourself by the overhead map, which not only shows the layout of the terrain but also serves as a radar for all incoming items. While you certainly can do without the map in the beginning of the game, later on it becomes very important in order to navigate stages that have dead ends or multiple looping paths. Due to the reduced space inside the tunnels the map is not active when flying through them.
One thing is certain in Total Eclipse Turbo: you will get hit, either by incoming enemy fire or by colliding and rubbing against terrain and obstacles. The catch is that instead of restricting shield recovery to the S item alone, the game also grants you extra energy for every enemy you destroy. Some of them give you back more energy than others, so knowing which ones are the best targets to keep your energy level high becomes second nature after a while. Besides, since the bomb is a destructive flash that expands forwards it's also the best way to quickly regain energy by destroying everything that lies ahead. If the energy gauge gets empty the life is lost and you're respawned in the last checkpoint.
Items placed at fixed locations give everything you need to upgrade the ship's firepower. Besides the abovementioned S for shield recovery you'll also come across a nice array of weapons: the stellar blaster (a stream of 3 straight shots), the ion whipgun (spread pattern that comes out in a horizontal plane), the photon strafer (fires in two planes simultaneously), the scatter gun (an all-encompassing spray of bullets) and the rotary gun (a wide ∞ shaped pattern). The green dots below the weapon indication on the upper left show your firepower level, which is upgraded by sticking to items of the same type. Lastly, you might also come across extra bombs, extra lives (1UP) and stars that provide extra points (take five consecutively in the same area for progressively higher bonuses). 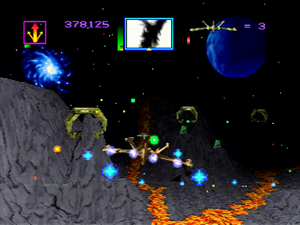 Follow the lava river for great justice
Though a bit raw by today's standards, graphic textures are competent enough to allow for a decent hit detection. Mixing wide open areas with claustrophobic tunnel parts is definitely a nice idea for a rail shmup, but Total Eclipse Turbo goes beyond the regular dodging schedule by succesfully adding speed control to the gameplay. Accelerating and braking are essential to conquer several areas that demand a fine sense of timing and placement. Moving passageways, closing doors, narrow ravines, splitting pathways and energy barriers that either push you forward or drain your energy are quite common in the second half of the game. The gimmick definitely works, I only wished the developer also added a speed gauge so that we could know how fast we're flying.
On difficulty terms the game requires just the right amount of dedication to be learned, with a few aspects that help players advance. One of them is the fact that all items appear again in the same place if you replay a checkpoint, which means you can reclaim lost lives by repeatedly collecting 1UPs (note that score-based extends are also granted at every million mark). One variation of stage 2-3, for instance, has nothing less that three 1UPs for grabs, which means you can hoard extra lives as much as you want before moving on (this is reason enough to invalidate the game's scoring system). On the other hand, this same stage is quite hard due to the amount of enemies that fire red bullets, which are much more deadly than the initial yellow ones. Flying slow towards a turret or an enemy that drops many of those might kill you almost instantly.
When you consider the forgiving nature of the energy gauge feature and the several little challenges imposed by the game, Total Eclipse Turbo ends up being a nice entry point for the rail shmup subgenre. Not overly hard like the arcade classics but not a pushover either, and a nice diversion for cheap sci-fi aficionados. The unbalance in the sound design is a pity though (sound effects are too loud and will not let you listen to the soundtrack whenever you're shooting).
The picture below was taken at the end of the spiralling escape sequence after you beat the final boss. That's the final chance you have to see your score. Interesting note: the game received a sequel for the North American Sega Saturn called Solar Eclipse, which was soon ported for the European market as Titan Wars (also on the Playstation). 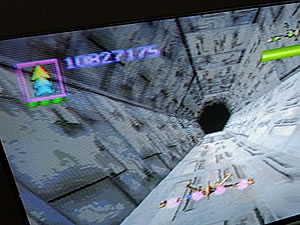