A few weeks ago a couple of friends told me that their cartridges for Grind Stormer (sometimes spelled as Grindstormer) had died on them. It is widespread knowledge that there's an apparently huge defective batch of these carts released for the Sega Genesis in North America, and since I recalled my copy was okay I figured it would be a good moment to enjoy it before the thing died on me as well. Fortunately my cartridge was fine, but if you’re interested in getting it and you don’t want to incur in the risk of buying a defective product I recommend getting the Japanese version (it was never released in other regions).

Classic vertical action is the name of the game in Grind Stormer, the second-to-last Toaplan shooter. It came out before Batsugun, and the influence of both games on Cave’s first shmup DonPachi is undeniable. The Mega Drive port of Grind Stormer preserves the dreaded use of checkpoints from the arcade original, therefore it's a relatively tough game. Rank is also implemented, and even though Sega’s machine can’t quite handle all the sprites it’s supposed to, the dynamic result is at least engaging. Colors and graphics take a severe hit and look rather washed out for the most part, and for a game released so late in the console’s life this is a tad disappointing. Practically all earlier Toaplan ports such as Truxton, Fire Shark or Twin Cobra have more polished visuals. 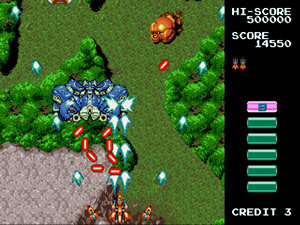 Don't get too excited, it only looks like DonPachi

A great treat about Grind Stormer is that the game can be actually seen as a two-in-one package. There are two modes that can be selected at the start screen. Grind Stormer is one of them, and consists of a straightforward shooter with specific power-ups for each weapon or extra item. Then there’s the V-V mode (pronounced V-Five and sometimes written as V-5), which is basically Toaplan’s take on the Gradius weapon array formula. The main game is almost the same (there are a few differences), but all power-ups are handled as if you were playing a Gradius game. Homage or plagiarism, it doesn’t matter, both modes play quite differently, and mastering one of them isn’t any guarantee you’ll be as proficient in the other.

In the Grind Stormer mode, the ship is equipped with two pods that amplify its firepower and behave according to the type of weapon you have chosen. Later on two more pods are acquired as you take power-ups to increase the weapon’s strength. As with weapon activators, POWER items are released by destroying specific carriers, which also bring speed-up capsules (S-UP). The weapons available are SHOT, HOMING and MISSILE. With the shot weapon you can alter the angle of pod fire by refraining from shooting (for more damage always keep a straight/forward alignment). With homing, pods will automatically chase and lock onto enemies at will, whereas missile will make all pods follow you around like a shadow. A diamond represents an extra bomb. When triggered, bombs make you invincible for a brief while.

An interesting detail is that upon dying you always get back with +1 speed and three bombs instead of the initial two. All items collected that don’t have any effect on the ship (same weapon or taken when their function is maxed out) are worth 10.000 points. Whenever the bomb stock is full (6) the score will automatically start increasing like a counter at full speed, stopping momentarily if the screen comes to a halt, as in some boss fights. The score will only cease to raise if the player bombs or dies. On the other hand, a maxed out bomb stock also triggers maximum rank, so you can expect the ultimate leap in bullet count/speed from all enemies. Aggression level does start to increase prior to that, especially if you reach maximum power and get the extends at 300.000 and 800.000 points (more extends will be granted for every 800.000 points afterwards). It’s possible to get a 1UP in the third stage by destroying the yellow bunker at the end of the bonus scoring field (in a rare occasion I also got a 1UP by destroying all turrets after the large head that sucks bullets in stage 5, but I was never able to do it again).

Although quite simple, the scoring system is enriched by the aforementioned max bomb counter and by score fountains spread throughout the game. The first kind of fountain is a ground icon that cycles fast between 500, 1.000, 5.000 and 10.000 points. The other one is a pink block that releases random score bonuses as it gets hit - most of these are found during the 3rd stage. Together with the fact that this level has the coolest BGM in the game, that makes it my favorite stage. The rest of the soundtrack is rather unremarkable, but the collection of sound effects is surprisingly varied and carries a bit of the PC Engine syndrome – it often overshadows the music, making it hard to hear it properly.

I didn’t play the V-V mode much, but here’s a summary of the differences I noticed: all items are power-up capsules (diamonds) that light up the weapon array - wait for the desired function to get lit and activate it; there are no bombs, but you can activate a shield that can take up to two hits; there's an end-of-stage bonus based on how many items you collected; enemies are more aggressive, some of them even have extra/different attack patterns than those seen in the Grind Stormer mode.

Practicing different stages is made easy with the training feature from the OPTIONS screen, where you can also deactivate the PAUSE button permanently for a more arcadey feel . As a whole, the game is enjoyable but suffers from a lack of flair that screams “average”. Flicker sets in as you fight large enemies, as well as slowdown, but fortunately none of them get in the way of gameplay, which has pretty fast and intense action. With a few tough sections reserved in its second half, I’d say the learning curve is fair and in line with the Toaplan style, however it’s a shame that the best parts of the graphic design show up only much later in the game.

I was able to loop the Grind Stormer mode up to stage 2-4 on NORMAL (MODERATE). The second loop came with the expected increase in difficulty, changes in bullet sprites, a more powerful ship and score fountains that spew multiple bonuses of 10.000 points only! 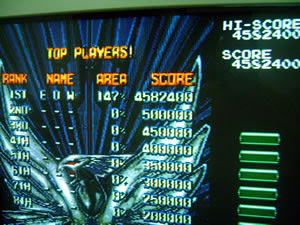