Rail shooters are intriguing. They seem to be impossible, but at their core they're probably some of the most pure practice-based shooters. Take Galaxy Force II, for example. I have always heard about the game but never really had any contact with it (apart from very sparse shots at the Mega Drive version) until a few weeks ago. My first impression as I tried it was “how the heck is anyone able to sustain the necessary fuel levels to succeed in this?”. As intimidating as it was in the beginning, practice and careful observation eventually allowed me to conquer the 1CC, and I finally understood what Sega tried to accomplish with this game. As far as the philosophy behind arcade machines go, Galaxy Force II is probably the king of all rail shooters.

I don’t mean to say it’s the best of its kind, even though it came out as the definitive improvement of the sprite scaling technology pioneered by Sega itself in Space Harrier, but as a quarter muncher Galaxy Force II must have been unbeatable. The reason for this is that the game forces the player to abide by completely different rules than those we’re used to, such as: forget the concept of “lives”; don’t even think about laying low so enemies won’t notice you; be aggressive; there isn’t a single second to spare here. From the moment that ship is propelled into space you’re already condemned to a horrible death if you don’t man up and destroy as many enemies as you can, so get ready to race for your life as you struggle to preserve fuel in order to stand a chance at survival.

Built upon the ideas that gave birth to After Burner a few years earlier, Galaxy Force II even mirrored the confusion about differences from the first Galaxy Force game, which existed for just a couple of months and was quickly replaced by its successor, along with two extra levels and general adjustments to the gameplay. On the other hand, both titles lifted many of the restrictions that made After Burner such an excruciatingly difficult challenge by endowing the player with a more generous aiming cursor, unlimited missile ammo and overall better maneuvering capabilities. 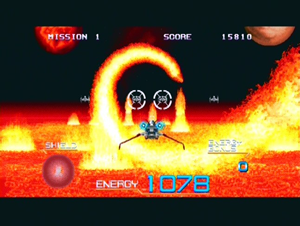 Feel the heat of the sun

In its 30th issue, the Japanese Sega Ages 2500 series for the Playstation 2 honored the company’s legacy with Galaxy Force II - Special Extended Edition. This exquisite disc comes with four titles: an arcade-perfect emulation of the original game, the Mega Drive and Master System versions and the all-new Galaxy Force II Neo Classic, which revamps the arcade incarnation with smooth graphics, several visual effects and a higher native resolution that removes the original pixellation. This overhaul is subtle and exclusively aesthetic though, altering nothing at all from the original gameplay (unlike the stand-alone reworkings of After Burner II and Space Harrier, both released as part of the same series). More than any previous semi-competent ports (Saturn, FM Towns), this Special Extended Edition provides a great opportunity to experience Galaxy Force in its most important variations, with fully customizable features and proper save functionality.

An evil menace called The Fourth Empire has been seizing planets for evil deeds. You are a member of the combat force designated to bring peace back to the galaxy, and your mission is to destroy the energy cores in five of these planets before striking the final blow in the heart of the enemy itself. Each planet campaign is comprised of one or two open space sections followed by an infiltration inside a tunnel and ending in the planet’s evil defenseless core. The player is given the option to select the initial planet to be pacified, but in order to gain access to the last stage you’ll need to go through all five planets first. The graphic design varies nicely throughout them and includes a space station, a fiery planet dominated by flaming snakes, a green planet full of organic life, sandstorms amidst rocky formations, a scramble across the clouds and a trippy wormhole leading to the final fortress. The sci-fi atmosphere is remarkable and enriched by an excellent blend of sound effects and music - it's as if you're invading and annihilating a series of death stars all by yourself. Besides, the second stage makes me feel like I’m in one of those suns from the first stage of Gradius II or patrolling parallel sectors of the third level from Salamander.

Controls are simple and responsive: one button is used to shoot, another to fire missiles on locked targets and a third one works as throttling for thrust/speed. Fuel reserve goes down pretty fast after the first take-off, so all pilots are advised to fly as fast as possible in order to preserve it. Replenishing the initial stock of 1.200 fuel points is accomplished by destroying enemies and accumulating an energy bonus that gets cashed in either when you come out of a tunnel inside the level or after you beat the boss. This energy bonus also plays a big part in scoring because it's also cashed in as points when the stage ends.

Controlling speed isn’t something that comes naturally though. The default throttling button in the controller is the right analog stick, and it’s simply awful. You can choose from five predefined control settings (standard, easy, arcade, sega saturn pad, flight stick 2), but none of them worked right for me so I just set R2 as brake. This means the ship flies at full speed all the time, decelerating only when I tap or hold the brake. Lastly, mapping shot and missile to the same button allowed me to fire away and just tap whenever I wanted to shoot my missiles. The only item/upgrade you'll see in the entire game is the hovering attachment that docks over the ship automatically in every level, falling off a while later. Its function is to increase the number of enemies you're allowed to kill with a single lock-on. Getting hit and crashing into enemies and walls not only takes away energy/fuel, but can also slow down the ship considerably. Energy loss gets even more critical as soon as you take enough hits and lose the starting shield ("shield broken" is the message you hear, as pronounced by the same voice that warns you about the turns inside the tunnels).

Of course the game doesn’t come without faults. These are mostly related to the confusing sense of depth inside caves and tunnels, and how you’re easily bumping into them until you manage to memorize the correct position to make the approach. That wormhole part of the last stage is particularly infuriating at first, both in the arcade original or the Neo Classic revision. Adding to this, here are some of the tips I learned in the process of 1CCing the game, also valid for both modes:

A full credit of Galaxy Force II takes less than 15 minutes, as seen in a replay of a complete run that’s included in the disc. There’s also a really cool feature that allows the player to record his/her own game. Extra display options exist for the Neo Classic variation, which appears in letterboxed widescreen on a CRT but can also be played in real 16:9 or stretched 3:4. Different versions of the soundtrack can be selected, including the eccentric rearranged FT Towns rendition.

My first objective with the Special Extended Edition on the PS2 was to beat the original arcade game. Once I succeeded I went for Neo Classic and got a slightly better 1CC score. As I mentioned above, both “modes” are very much the same, down to the complete absence of continues or any alternatives to practice isolated stages. Don’t be frightened by this if you’re wondering about trying out Galaxy Force II though. The fuel life system is intimidating only in the beginning, and the scrolling speed is considerably more reasonable than in After Burner or Space Harrier. In essence, it’s a quick game that rewards repeated plays with well-earned experience and pure awesomeness.

My best results in each title are in the high score tables below (Galaxy Force II arcade first, Galaxy Force II Neo Classic next). I played on Normal with everything else on defaults (options such as energy timer and shield strength can be tweaked for an easier experience). For more information on the game, I urge everybody to refer to this interview for an excellent insight into M2 and the process of porting the game to newer systems, including the Nintendo 3DS. 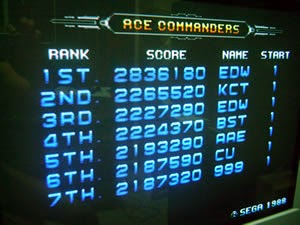 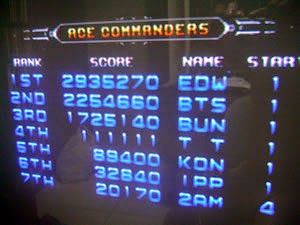