For an extremely modest game born on the Wii U in 2014, Ice Cream Surfer was certainly granted a big honor with this physical release for the Playstation 4. It is, in fact, one of the many digital products that have recently been made into disc form thanks to the services of independent publishers catering to extremely niche portions of gaming audiences. I'm all for a real, concrete product myself, so yes, I'm definitely inserted into one of those niche markets. Unfortunately, poor Ice Cream Surfer is far from living up to the standards one would expect from a retail release for such a powerful platform as the Playstation 4.

Posing as a colorful cute'em up, the game is a bare bones adventure reminiscent of titles like Cloud Master and Parodius. The story takes place in the so-called Flavor Galaxy, which has been in turmoil since the evil Broccoli created a crazy army to destroy it as revenge for the fact that kids hate hate vegetables but love ice cream. The player assumes the role of one of the five members of the Cream Team, who depart from the ice-cream planet in order to rid the galaxy of the bad taste brought about by the evil Broccoli creature. Two friends can join forces to play in co-op.

Okay, the concept is cool for some wack, but the standards are those of an online Flash game, or one of those penniless XBLIG efforts. The characters you play with don't even have in-game names, but referring to the trailers you see them as Ace (protagonist "ice cream kid"), Hima (the big monkey), Super Cream (the superman), Sailor Twister (a loli surfing a lollipop) and Rei Tou (the samurai).

Each character has his/her own capabilities for shot (×) and special attack (□ or ○). All characters share the same speed and roughly the same problems with their hitboxes, which just seem too big for their sprite work. This means you need to get used to a safe zone when dodging. All those colored diamonds released by destroyed enemies fill up the power gauge, which in turn allows player to use their special attacks. The mechanism for stocking special attacks is kinda shady, but as long as a star is shown on the power gauge you can use them. Special attacks make you invincible while they last.

Upgrades and other items appear randomly or by destroying a blue gift box. Popsicles are the regular power-ups. Their color is irrelevant except for the blinking popsicle that makes you invincible for a few seconds. Ice cream toppings that look like small keys, on the other hand, affect gameplay in the following way: blue creates a rotating option, orange creates a trailing option that provides additional firepower and green makes you suck all diamonds automatically. Toppings are self-excludent and their effect is restricted to a single stage only. There's also another item that grants you an extra life. The alphabet letters forming the word ICE CREAM are there just to provide some bonus points at the end of the level.

Following the ice cream environment of the first stage you'll venture into other planets with different themes (vegetable, candy, sushi and fire) before reaching the no-flavor world dominated by the evil Broccoli. The art style remains fluffy and colorful from start to finish, and the music is average with a few standout BGMs (the one for the third stage is cool). On challenge merits the whole game is rather easygoing, but dying in one of those sections with more enemies than usual can lead to tricky situations. You'll be respawned at the default power level and depending on how the game throws popsicles you might need to limp for a while in an underpowered condition. Each boss phase has its specific health bar, but all bosses are quite easy to defeat once you figure out their patterns. Beware of the invincibility popsicle, since it blocks you from shooting you might be caught off guard once its effect passes. 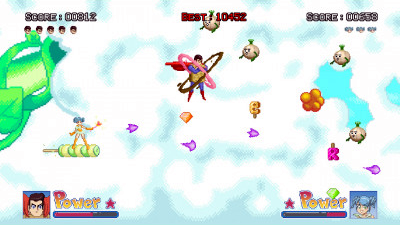 The best character to use is undoubtedly the ice cream kid. He achieves great coverage once his shot is maxed out (it takes four popsicles to max out firepower). His laser beam special attack is also the best one. The next best character is probably Super Cream. All others have deficient, crippled or capped firing patterns and only become half decent options if you join forces with a friend in co-op play. As a curiosity, the shoulder buttons (RB, LB) toggle a screen mode that simulates the slightly curved canvas of old TV sets.

With such a simple, easy and straightforward gameplay, Ice Cream Surfer is nothing more than a cheap pastime even for genre newcomers. Besides an assortment of easy achievements you'll unlock art snippets in a dedicated gallery as you play, as well as a lenghty comic book with the characters from the game. Don't bother checking the online leaderboards though. The scoring system is broken because some bosses and mid-bosses can be easily exploited. In the second boss fight, for instance, all you have to do is park your character in the upper left corner and fire away for an eventual counterstop.

As soon as I noticed the low bullet count in the Normal/Middle difficulty I chose Hard and beat the game twice with Ace. On Hard you need to deal with more resilient enemies and more bullets, but nothing too taxing. Here's the final result with some boss milking from testing spots for the broken score: 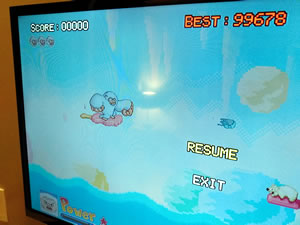