In the dawn of the modern horizontal shooting genre, Irem and Konami are often remembered as the absolute pioneers thanks to R-Type and Gradius. Even though Darius came out at around the same time and is technically on par with those two, my perception is that the game lags a little behind in any direct, general comparison. I can understand that if we focus solely in what each title brought to the table regarding pivotal innovations. R-Type introduced the offensive/defensive power of the force, Gradius showed us all the possibilities trailing options could provide, but what of Darius? Branching paths? The unique set of marine-based bosses?

Though very nice design choices, the above weren't really the defining aspect of Darius. What actually wowed arcadegoers at the time was the novelty of playing a shmup in three horizontally-aligned monitors. Due to this extreme widescreen scope the game was never given a proper home release until 2016 by means of the Arcade Archives series on the Japanese Playstation 4. Then one year later the game went retail with a few gameplay extras under the name Darius 30th Anniversary Edition, a gigantic package aimed primarily at diehard fans and collectors: besides the game disc you also get no less than 7 soundtrack CDs covering the entire series and ports (bar Dariusburst and its variations), a superplay disc with special runs for Darius, Darius Gaiden and G Darius and a booklet with designer interviews. A flamboyant variant called Famitsu DX Pack also included a tea cup, a bath towel and a 3D crystal souvenir with an LED light-up stand.

Now everybody who's been reading this blog for a while knows how much of a fan I am of this series. As soon as I heard of this package I knew I had to get it and I knew I would one day own a PS4. I just wasn't aiming for the Famitsu DX Pack, but I was kinda forced to buy it because the "regular" version was quickly sold out. Panic, my friends, pure panic, I'm just not sure if was due to diehard fandom or collector's syndrome.

In the grand scope of Darius a stylish spaceship called Silver Hawk must travel through seven stages defeating all kinds of mechanical fish and marine creatures, in a branching scheme that allows players to take the most diverse routes and finish the journey in seven different levels. Some of them are easier, some are harder, some offer more opportunities for powering up, some give players more points. This gimmick of multiple paths provides awesome replay value and is reason enough to justify any sort of hype surrounding the game (and the series as a whole), even though in this case there are other reasons for praise – and criticism – as indicated by the presence of three different game iterations in the disc release.

Regardless of the chosen game mode, gameplay rules are the same. There's a main shot (here called missile) and a secondary air-to-ground shot (here called bomb), which can be mapped to the same button if desired. Natively there's no autofire but this can also be set in the options screen. Colored enemies release colored orbs that power up the ship: red upgrades missiles, green upgrades bombs and blue creates/upgrades the shield. A power-up bar shows your upgrade levels, and by filling the bar you advance into the next level of each ship aspect. The progression goes with missile → laser → wave, bomb → twin → multi and arm → super → hyper. Some firepower aspects change as you take a few items, others only show visual alterations when you get a full bar upgrade. Dying sends you back to a checkpoint and to the starting positions of the current weapon levels.

By hitting specific spots in the scenery (you'll see a different hit sprite), other items can be released for immediate pick-up: the gray orb gives random bonus points (from 50 to 51.200), the golden orb is a smart bomb that melts all on-screen enemies and bullets and a tiny spaceship gives you an extra life (a single extend is awarded with 600.000 points). With the exception of the ground opposition and a few specific foes, all enemies in Darius arrive in waves. Killing a complete wave awards bonuses that range from 1.000 to 40.000 points, an aspect that became a trademark of the series throughout all its chapters. It's interesting to note that all power-up orbs are concealed by the last enemy in a wave.

Though primitive and to a certain point repetitive, the art design of Darius carries an otherworldly touch that's duly escorted by an equally offbeat soundtrack. There are only four graphical themes (caves, fortress, surface, underwater) that get reworked from start to finish (colors and terrain obstacles change from zone to zone). Stage transitions are preceded by a split where the player must choose the desired route to follow, just remember to not stand in the middle of the screen or you'll die by colliding against the split. Speaking of which, in this original game the shield does not grant invincibility against obstacles so don't rely on it to get through walls (I reckon many people might be spoiled by having been exposed to Darius II or Darius Gaiden first, just like me).

Clear highlights of the game, bosses fill the entire screen with their attacks and often require constant movement by the player. Every boss is preceded by the now famous WARNING message and then an easy shower of splitting orbs. They are aided by a series of timeout cubes that home in on the player if the fight takes too long – if it drags even longer the cubes turn into blazing fast bullets that will inevitably kill you when destroyed. Boss difficulty is about average throughout but there are some extremes, such as pushover Octopus or pricky Fatty Glutton. In fact, Glutton exposes the worst side of the gameplay in Darius by demanding players to refrain from upgrading from missile to laser until they've beat him. The laser is too thin to actually be useful in blasting the exploding fish that come out of Fatty Glutton's mouth.

An obvious point of dissatisfaction in the game, the above observation on Fatty Glutton's difficulty is actually one of the reasons that led Taito to release an update called Darius Extra (Version). Besides reducing Fatty Glutton's health to a point where the fight becomes fair when you're using the laser, this revised version is overall harder, with faster bullets, tougher boss patterns, a few more aggressive enemies, new enemy formations in specific zones and more erratic pre-boss orbs. There's also a reward of one million points per each remaining life upon game completion, plus lots of those useless golden orbs were repainted gray. Too bad the random bonuses are still in place to upset any attempt at scoring in the most unexpected ways.

The good news is that the Extra version is included in this package along with regular Darius in its official "New version". There's also an "Old version" variant that plays exactly like the new version, as far as I could tell it only differs in the amount of health of some bosses (this can be easily noticed for Keen Bayonet and Octopus). Each version has its own high score tracking and even a few mode-specific tweaks, and overall there's a plethora of graphical and sound adjustments available in the options menu. Unfortunately autofire is disabled in both the "Hi score" and "Caravan" special modes, both of them aimed at uploading results to the online leaderboards.

Below is a quick translation I was able to come up with for all the Japanese menus in the game. Don't even bother looking for a way to activate continues, just be prepared to restart the game if you lose your last life (however, extending play time is possible by allowing a second player to join the credit at any time).

Though pretty much the same product as the Arcade Archives digital port, the retail release is adorned by an exclusive display of the original arcade instruction panel (it can be disabled in the options). An extremely solid port in itself, I understand why this beefed up physical edition might have seemed like a cheap cash-in for Taito. However, for real lovers of the series (not only the first game, I mean), it is definitely a must have on the account of the soundtracks and the superplay discs. And the definitive rendition of Darius, naturally. Now I'm sure I'll see old ports Darius Plus and Super Darius a little bit differently, in a good way of course.

My final high scores for each main version are below (Normal difficulty). Even though I beat the game in several other routes in the New version, I decided to stick to ACEIMRX across all of them so that I could have a better stance at spotting the differences in between, and also because ACEIMRX has a very good scoring potential. Final boss Octopus was checkpoint-milked in the Old and New versions, the Extra version highest score was achieved in a no-miss run. 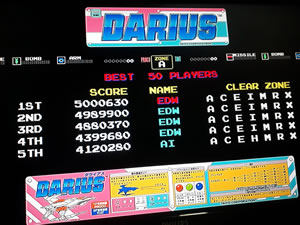 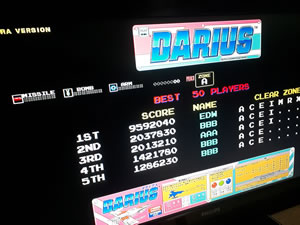