Nowadays, the determining factor that should motivate anyone to play Ai Cho Aniki is definitely the kitsch value related to its very particular game design. However, back in 1995 nobody would expect how offbeat the game's content would be, even by extrapolating what had been shown in the weird Cho Aniki three years earlier. Therefore I believe this game should be approached in two different ways: (a) as one of the most unique gaming experiences ever and (b) as a true shmup. As an experience in absurdity and a wacky subject for conversation, Ai Cho Aniki is one of a kind. However, as a shmup, it is a complete disgrace.

One day I got home really tired, and as I didn't feel like diving into the excruciating difficulty of Dragon Spirit but still wanted some shmup action, I finally booted Ai Cho Aniki to see if I could at least grasp the basics of the gameplay in order to try a 1CC later on. Two hours passed, and right there and then I already had absolutely no intention to play this game any time soon, simply because two hours was the time I needed to both achieve the 1CC and to also get utterly frustrated with the game mechanics. It's astounding how disappointing this sequel turned out to be, and I'm at least glad that in its next installment the series got back to the regular shooting we all know and love.

Why am I bitching so much, you ask? 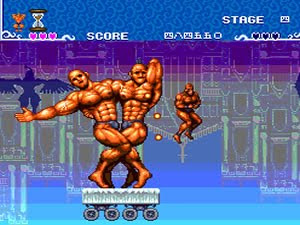 Ai Cho Aniki (which means something like "Super Big Brother of Love") is an odd kind of shooter in all possible ways. Graphic design is all about seminaked men in ambiguous homossexual-driven situations. Adon and Samson, the bodybuilder characters, replace former protagonists Idaten and Benten since they sort of abandon their heroic duties, as seen in the animated intro. You can expect all sorts of crazy gay stuff, such as flying ballet duos, butterfly dandies, a snowman that releases minions from his crotch, crawling pairs on 69 poses, satires to Michelangelo's and Botticelli’s artwork (such as a Venus that's replaced by a guy that summons aubergines), etc. Combined with crazy psychedelic backgrounds and some bold mecha style, it’s a wacky concept that wins due to weirdness alone. I thoroughly enjoy the art here, but unfortunately a shmup can't be judged by this aspect alone. And that's where Ai Cho Aniki completely falls apart.

On the gameplay front, regular shooting is predominantly replaced by special moves derived from fighting games. This means that in order to have a chance at doing some decent damage, the player has to input commands that resemble hadoukens and sonic booms. Keeping the fire button pressed will merely result in some measly homing shots that are ultimately useless when the screen gets filled with more than three popcorn enemies.

With the other button in the controller the player can spin for unlimited invincibility. I might be wrong, but my guess is that this function is there just to make up for the considerable size of the character. It’s possible to weave through the whole game spinning like an airborne ballerina, stopping only to fight the necessary bosses and mid-bosses. Of course this doesn’t help in scoring at all – and scoring here is displayed complete with original Japanese numbers. Don’t worry though, upon beating the game a regular roman representation of your final score is properly displayed in a last screen. Reaching the end is a matter of preserving the vanishing hourglasses: they deplete over time, and losing lives makes them disappear even faster. Benten appears from time to time as the power-up carrier with some replenishers and extra hourglasses. However, there isn't any power-up that increases the character's firepower.

When all of the hourglasses are gone it’s game over, with no continues whatsoever. Is this bad? Not really. With only four stages, it takes just a bit of practice and some minimum focus to see the end of the game. Stages are divided into three areas each, with the middle one working as a sort of intermission.

While maneuvering the character and trying to make the special moves, you'll be constantly caught up in a series of weird results that will only cease when you stick to a single useful command. And of all moves available the only decent one is the long range sonic boom sparkling shot (←, →, button II - obviously no charging necessary). Every once in a while the huge head beam will be activated for greater destructive effect, but I have no clue how to properly trigger it. I assume co-op play is possible, but I couldn't verify that.

The sheer amount of flashy gay references is definitely the highlight of the title, but every other concerning aspect in Ai Cho Aniki falls flat miserably. Since the normal shot is useless, playing this as a shmup is a boring chore. Having to rely solely in one move in order to survive is stupid and prone to failure, which often leads to frustration. This is definitely not how I want a shmup to play. The music is well executed but just as weird and highly overrated, with awkward arrangements that serve the mediocrity in the gameplay really well. In true honesty, Ai Cho Aniki is a huge disappointment and I'm just glad it is past me.

I beat it once, and that’s enough. My final score was this one: 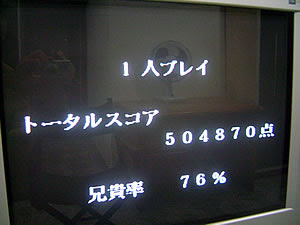