Some shooters are plain weird, and I can’t help but feel I’m just starting to realize that a large number of them seem to exist for the PC Engine CD. Case in question: Metamor Jupiter, an outer space themed shmup with a superficial weirdness that eschews conventions in detriment of intergalactic drama. Dialogues abound, but since the game is exclusive to Japan I have no idea of what’s going on in the meanderings of the story. The shooting part of the game also offers a few obstacles to comprehension due to some underlying features that many people take for granted if they can’t read the instruction manual or aren’t bothered to dig deeper into the game itself.

In essence, Metamor Jupiter isn’t a friendly game, its obscurity is proof of that. There are very nice graphical and musical touches here, but unfortunately other aspects keep it from being more appreciated. A couple of impressive rotating backgrounds immediately brings to mind Metal Black and Darius Gaiden, for example. Some of the music is genuinely unique, with eerie undertones and arrangements aimed at establishing the correct atmosphere alongside the setting. It’s kinda like having Fantômas and Mr. Bungle instead of good old "mainstream" Faith No More, and it works beautifully (is this too obscure as a music analogy? I hope not). Metamor Jupiter also has a nice blend of wide open and claustrophobic stages, with a decent progression that’s only spoiled by a few repetitive layouts.

Once the lengthy well-made intro is done the start screen shows up and the player is allowed to select between difficulties “BEGINNER” or “EXPERT”. I went straight to EXPERT, so all further observations on the gameplay refer to this mode. Apparently Jupiter isn’t a reference to the planet, instead it’s the main character’s name. He pilots and seems to be united to a pointy organic-like spaceship capable of firing three types of weapons, instantly selectable at a press of the SELECT button. Firing the chosen weapon is accomplished with button II, switching shot direction is done with button I. Weapons work according to the combination of the energy from three colored orbs on the upper HUD: when blue is on top you get a vertical laser with a weak straight shot, with green on top the weapon changes to a straight laser and with red you only get the straight shot. 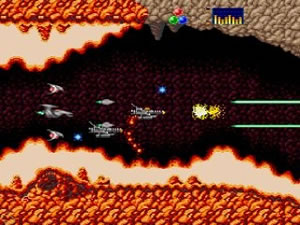 Caves full of fire and lava

Crystals are responsible both for powering up the weapons and restoring the ship’s armor. Armor level is indicated by a waveform-like gauge that starts in green (maximum health) and changes until it reaches red (minimum health) when the player is about to die. Whenever you get hit weapons are downgraded by one level, but instead of the usual flickering/blinking effect ship damage is only registered by a characteristic sound. The problem is that sometimes this cue is disguised amidst several other sound effects and you only notice you’ve lost health when you get a glimpse at the energy gauge. However, even worse than that is the fact that some enemy attacks drain more energy than others. It isn’t uncommon to go from a sparkling green gauge to a low red status that's synonym to imminent hull failure (beware of bosses that like to get cheap with lasers and tentacles).

At selected points in the game you’ll come across a small green option. You can take two of them, and as they hover above and below the ship they provide additional firepower, protection against incoming bullets and unique charging powers according to the weapon you’re using (options assume the color of the upper orb in the 3-color energy source). Charging occurs automatically as you keep the shot button pressed, and as soon as the options/orbs are blinking fast all you need to do to unleash the attack is stop firing for a moment. If you’re using blue the options are propelled forward, with green they home on the closest enemies and with red they expand in small firing circles.

With all of the above gameplay aspects learned, there’s still one thing that causes preoccupation as soon as you start playing Metamor Jupiter: that ship is too damn slow! Worry not, to alter ship speed in five selectable steps just pause the game and press UP or DOWN (wait for the pause sound to fade in order to hear the effect for speed selection). The starting speed is at level 1, but most of the time I keep it at 5. The only part of the game where I’ll pause it again to select minimum speed is during the stage where a huge battleship must be destroyed from the inside.

Getting used to the available weapons takes a little time. They all seem a bit off and clunky in their firing patterns, and even the upgrading process is weird: green expands to a spread shot and maxes out with multiple trailing shots that get sunk into the ship if it’s not moving, while the vertical lasers on the blue weapon evolve to horizontal laser bars that travel outward with a poor firing rate. The only good one to use in my opinion is the straight laser (green), for its concentrated power and the homing charge shot provided by the options. Remember that options can be lost to an enemy that fires two waves of three flame bubbles (kinda like the bug thief from Gradius). Fortunately the ship is immune to the fire bubbles, therefore you don’t need to despair when the thief makes its way from right to left. Options do make a difference in firepower, losing them in certain spots leads to tougher navigating conditions.

Graphically Metamor Jupiter has plenty of variety despite the repetitive sections. The game scrolls in all directions at different speeds as you get deeper and deeper into organic caves and industrial facilities. Asteroid fields and spaceship armadas fill outer space voids, while huge laser beams of death preceded by a characteristic sound warn you to get out of the way at once. Special attention must be given to environmental hazards – the few helper ships that fight alongside you and die quickly offer some hints as to what may harm you, but nonetheless the danger isn’t always evident. Bosses are strange, most of them have naive/easy attack patterns but sometimes they seem to come with varying amounts of health. Once defeated, don’t fly over them until their explosion fades or you’ll die. Of all minor hindrances in the game though, the one that bugs me the most is the amount of sections where you’re supposed to just sit still or navigate while listening to dialogue. These parts are unskippable and you can’t even pause the game to select a different speed... Well, at the end of stage 5 you can at least hear (once again) the brief sample of where Hitoshi Sakimoto might have drawn inspiration for his epic work on Radiant Silvergun’s soundtrack.

Metamor Jupiter is the kind of shooter that keeps players at their toes all the time. Unlimited continues are there to allow proper practice, and given the dark setting and the deceptively dense gameplay it’s easy to conclude that this isn’t an ordinary game. Unfortunately, disappointment is huge for this is yet another example of a shooter with no scoring system of any kind (as in Legion and Psychic Storm). The only reward when reaching the end is a final animated sequence showing Jupiter reuniting with his girlfriend, followed by a lovely song as the final credits roll. 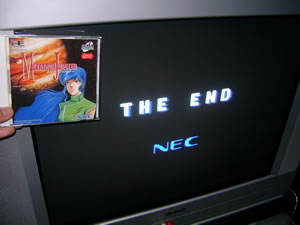