How is it possible to ruin a game that has nice production values, excellent character design, good graphics and great bosses? Psychic Storm is the prime example of a practical answer to that. To put it in words is simple: just take away the challenge and ignore any sign of a scoring system. What's left of motivation for anyone to get back to a game like this? I rarely touch on the subject of replay value, but in this case it's necessary to emphasize how absolutely low it is. Shmup experiences are all about interaction and rewards, that's why I can't help but feel utterly frustrated when I beat a scoreless game in a single sitting twice. Legion, Hani in the Sky and Barunba at least offered some resistance.

Aliens invaded the planet, but hope exists in the form a super powerful spaceship known as STORM BRINGER. It endows its pilots with psychic powers, enhancing their spiritual strength and allowing them to face the "unspeakable" challenges ahead. This brief take on the story is conveyed in hilarious Engrish as nice animated sequences show the pilots preparing for battle. The insect influence on the design puts the game close to the thematic realm of Cyber Core, but the enemy roster also includes different creatures such as flaming dragons and organic worms. 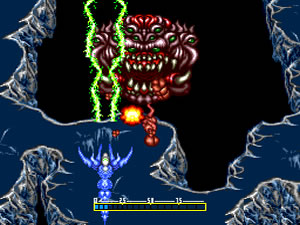 Nastasia turns into a scorpion to deal with the second boss

One out of four pilots must be chosen at the start of every level. Besides having his/her own firepower (with auxiliary shots in the form of tiny missiles or short-range cluster bombs), each pilot is capable of activating a special "transform" attack that turns the ship into a powerful being for a brief while. No harm will be suffered by the main ship during the transform attack, which also allows you to take damage freely while it lasts.

Here's a summary of the pilots capabilities:

On the lower left corner the upper bar corresponds to health, and the lower bar is what I have baptized the "psychic attack bar". It fills up automatically, and once it's full you're able to unleash a smart bomb that melts all on screen bullets and kills cannon fodder. To do it you need to press both buttons at the same time, and the way I do it consists of holding the fire button first (II) and then pressing the transform button (I). This means that to use the transform attack you need to stop shooting. Blinking enemies are responsible for bringing upgrade items: successively collecting blue orbs powers up the main weapon, pills regenerate health and orbs with tiny arrows inside can extend the duration of the transform attack whenever its timer is active. Once the health bar is gone the game ends, but both the health bar and the stock for transform attacks (three, fixed) are replenished when a new stage starts.

Before beginning a credit the player has the chance to change the transform function from "auto" to "manual" at the start screen. Auto is the default, and it works simply by automatically activating a transform attack whenever the player gets hit and the health bar gets down to predetermined thresholds - an old fashioned auto-bomb feature, let's say. As expected, choosing manual hands the responsibility of activating transform to the player.

All the good points about Psychic Storm slowly fade as you get through the game, despite the cool screens for stage introduction, the nice color choices, the abundant parallax scrolling and some impressive animations on bosses. Every stage is divided in two sections, where the second one unfolds as a close-up raid over the surface of the explored planet/spaceship. For some reason the first couple of levels last longer, with the order of the next three being selectable by the player. An extra stage is thrown in there as an unpexpected enemy appears from within the cosmos, so with the addition of a last level total stage count is seven. Being able to choose the pilot for each stage is made irrelevant in the long run because each pilot is powered up separately, and the only way to achieve maximum power with any of them is by sticking to the same character throughout the whole game. Switching pilots at the final stages isn't a wise move, for the new guy will face the increased challenge totally underpowered.

A good-looking shmup that's totally devoid of soul, Psychic Storm comes from the same Alfa System that would much later write its name in shmup history with the Shikigami No Shiro series. Amidst the forgetful experience what might linger on as an okay remembrance from this game is a slice of the music. It isn't remarkable by any means, but the BGM for the second stage is strangely soothing.

In my first credit (auto transform) I tested all pilots and settled with Joe for the final stages. After beating the game I did it again on manual transform, playing exclusively with Nastasia. Her transform creature isn't the best one, but her main weapon is excellent at higher power levels. Mission accomplished. The universe was saved and I was free to go to the next game. 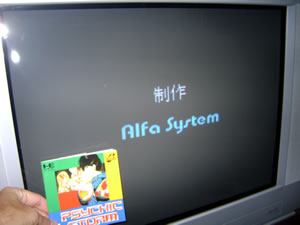