Out of the ashes of the Darius series and with shady connections to the absolutely unrelated Gun Frontier, Metal Black graced the arcades in 1991. A few years later a port was released for the Sega Saturn, and it would take approximately ten years for the game to be available on the Playstation 2 by means of the first volume of the Taito Memories Japanese compilation, or the second volume of the Taito Legends Western disc. I chose to play it on Taito Memories Volume 1 because of rumors concerning a gameplay bug in the other version, even though it seemed to run fine from the few tests I did.

"Project Gun Frontier 2" is an alias written all over this game, but there’s nothing that really links both titles. There is, however, a handful of psychedelic images in the background of the fight against the last boss in Metal Black that definitely evoke the dark musings of Gun Frontier's story. The Darius heritage is a much stronger one, as hinted by the number of creatures with an aquatic flavor that populate the game. If it wasn’t for the general clunkiness of the gameplay anyone would mistake Metal Black as yet another Proco and Tiat adventure. The vibe is definitely different though, with an inescapable degree of cheapness that might spoil the experience for newcomers. I had some previous knowledge under my belt, so I knew where I was getting into.

What’s most interesting about Metal Black is that the game did try to innovate, and just like Gun Frontier it served as explicit inspiration for a much more polished later title: Border Down (in the case of Gun Frontier the evolution was Battle Garegga). Metal Black introduced the great concept of beam duel, but at the same time included those dreadful bonus stages whose sole purpose might have been to showcase that cylinder effect applied to some of the backgrounds in the game. Not only do these bonus stages break the natural shooting flow, but they’re also a pain because it’s not hard to fail and miss the much needed bonus points for a decent final score. It’s unnerving. 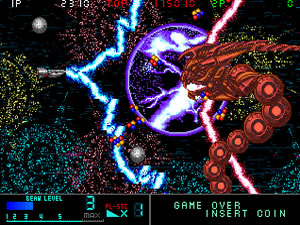 No enemy shall escape my wrath

So much about bitching, but what about the game itself? Stage progression involves a ship named Black Fly departing for outer space from a dead planet Earth. Its mission is to warp across the Solar System and annihilate the source of evil inside Jupiter. The ship was developed to hone stray energy from the enemy itself by collecting "newalone", molecule-like particles that float in space. Newalone is the source of the Black Fly’s offensive capabilities, upgrading its main firepower and providing fuel for a powerful energy beam. Main firepower evolves from a narrow shot into a wider straight shot, maxing out with a very useful range that hits things above and below the ship's horizontal axis. Firing the main weapon works in bursts, so it’s up to the player to keep pressing that button at regular intervals or to use some sort of autofire (not available). As for the beam, it comes with a strong laser discharge that consumes the whole power gauge, thus sending the main gun back to its default starting level (if activated with a maxed out gauge the beam will also create a series of lightning bolts that hit everything on screen for a few seconds). When the beam fades out completely it’s necessary to collect more newalone to regain power.

Pretty straightforward in execution, Metal Black is a mix of run-of-the-mill pixel art and a few nice graphical effects, such as the aforementioned cylinder-based backgrounds. Enemy and stage designs are decently varied, as well as the music. In fact, I believe I started to appreciate the soundtrack this time around, even if the best tracks are reserved for the second half of the game. However, where it actually shines is during boss fights, for that’s when the energy beam comes in as a valuable resource for victory. The catch is that bosses are also able to collect newalone and deploy their own beams, giving the player enough time to counter attack and create a powerful clash that quickly generates an energy sphere. Ideally the entity with the highest stock of newalone will end up sending the sphere against the opponent, but it’s also a good move to mash the buttons and keep collecting more newalone as the beam dissipates, hence sustaining it for a while longer. Also don’t let the boss stock more newalone or things will get nasty, especially against the dung beetle at the end of stage 3.

And then there are the bonus intermissions after levels 1 and 3... The objective is to destroy aliens in a chaotic room where they’re all flying around at random. Hit the shot button when the crosshair is over one of them and watch as a series of guided missiles obliterates the creature. On the first bonus area there are 5 aliens to be killed within 30 seconds, on the second one it’s 60 seconds for 10 more aliens (the timer runs faster than normal). Kill them all and collect extra bonuses for time left and perfect destruction. Fail and go on with a miserable increase in your score and a growing anger against the scoring system. For me it was pretty common to do relatively well in these bonus stages for a while, only to get shafted in multiple credits afterwards. If this happens final scores suffer, regardless of how much milking you’re able to pull out from bosses. Well, at least it’s reasonably possible to reach the extends at 70.000 and every 150.000 points after that.

Tricky corners, closing walls, sticking bubbles and lots of things coming from behind complete the set of minor challenges the player is bound to face in Metal Black. Memorize the most critical parts to reduce the amount of cheap deaths and activate the energy beam wisely. Learn how to use the wide reach of a fully-powered weapon to hit enemies without aligning too close to them horizontally. Remember that starting from stage 3 most enemies are spawned and behave according to where you are on screen, therefore positioning is key for survival. Most of the time I prefer to stay on the far left. Rate of enemy fire is timed, so exploit the windows to take them out in safety. Getting greedy on newalone (each one is worth 10 points) is another reason for dying stupidly, so don’t get out of your way for them unless the horizon is clear.

Click for the option menus translation for Metal Black on Taito Memories Vol. 1

The real ending to Metal Black is only seen if the game is completed on one credit, and dying in the last stage triggers a bad ending. I consider the game to be a minor effort from Taito, but now I have a better idea of why it might represent a guilty pleasure to some people. The result of my comeback is below (played on Normal, with a turbo controller for the much needed autofire capability). 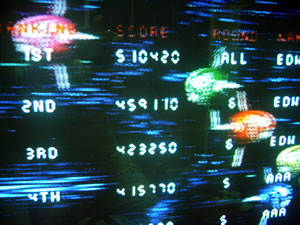