One of the most vocal complaints I’ve been hearing for quite a while regarding shmups is that people don’t really dig the bullet hell style that seems to have taken over the spotlight in the genre for more than a decade. These people often state that they miss the shooter of old, where the emphasis on adventure still had priority over bullet count. Well, in seriously venturing for the first time into the world of PC gaming I have just found a shmup that’s capable of quenching their needs: Satazius. Released as a stand-alone disc in 2011 and soon made available through a few digital distribution systems, this game is a strong homage to the glory days of Gradius, and to a lesser extent Darius and R-Type.

“Strong homage” can be relative, for many might deem it a sheer rip-off when it comes to the amount of aesthetical inspiration this game draws from the Gradius universe. I won’t delve into the details, but suffice it to say that the more familiar you are with Gradius the more you’ll enjoy the references, subtle or not. The most important thing, however, is that Satazius takes this great influence and delivers a cohesive experience that sounds fresh and genuinely fun, on top of being a trip down memory lane and a swift slap on Konami’s face. Plus it’s got lots of green. Not so many shooters have green in them, and I love green.

Satazius puts the player in control of a spaceship in the year 2051 as it flees in the last minute while its cruiser mothership gets blown to pieces. Space pirate scum misbehaved badly, so it’s your duty to teach them good manners. Outer space, cylinder mazes, turret formations, giant snakes, cramped corridors, volcano debris, thick laser beams, teleport gates, exploding fireballs, high speed scrambles, closing gates, boss pursuits. Satazius offers a lot to behold if you’re a fan of horizontal shooters. The only staple that wasn’t covered is the huge battleship level, but with so much to tackle this absence isn’t really critical. The soundtrack is a mixed bag of nice tunes, some of them with wonderful bass, and a few grinding compositions that hurt the game’s appreciation a little, such as the theme for the 2nd stage. 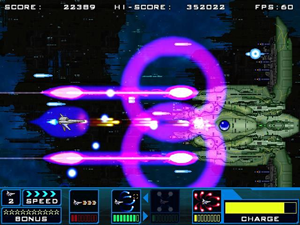 Pink bullets? Hmpf... Pink lasers is where it's at!

Allowing the player to choose how he/she wants to attack the enemy is one of the aspects that stand out in Satazius. Prior to each stage you must choose one main weapon, two secondary weapons and a charge attack (both secondary weapons chosen are switchable at the press of a button during gameplay). Initially the only types of main weapon available are the mandatory straight and spread vulcan patterns, whereas the gallery for secondary weapons includes surface-crawling missiles, forward shots, horizontally-seeking lasers and homing shot. A powerful homing burst and a single two-way wave discharge appear as initial choices for the charge attack. For each defeated boss you unlock a new type of weapon or a new charge blast, which can then be selected as the next stage starts.

Weapon efficiency varies greatly depending on your choices, therefore it’s natural to define different strategies as you advance in the game. Equally important is the process of powering up these weapons, which is accomplished by taking the correct items from destroyed little containers: red P (main weapon), green P (secondary weapon) and yellow P (charge attack). Other items consist of speed-ups, speed-downs, 1-hit shields and stars for bonus points. As indicated by the HUD, each weapon can receive eight upgrades, but the last one is always temporary. It boosts weapon efficiency to its maximum power while active, leaving it at the upgrade level 7 once the MAX effect has passed. Now players who dread losing firepower upon death rejoice: dying takes away only two upgrade levels of each weapon, so no more starting from scratch like in old Gradius games. And if you die on a boss rush you don’t need to face previously killed bosses all over again. Yay!

Once you nail down how to manage your weapons Satazius gets relatively uncomplicated. I like the fact that the ship is decently maneuverable even at maximum speed, and how the game never leaves you without options to take the much needed speed items (as in the shaft descent inside the fiery caves of the third level, where you’re allowed to take two consecutive speed-down items in order to weave better in between the pillars of lava plus two speed-ups as soon as you come out of it). The charge attack can only be used when the charge gauge is full, but the charge rate is often fast enough so that you always have it ready for that tricky passage that needs some extra firepower. Nevertheless if you still want the charge bar to fill up faster all you need to do is refrain from shooting.

Going beyond the basic gameplay into the realm of high scoring is directly related to how well you play and how many stars you’re able to collect. Each stage has 10 stars, and by taking them all the player receives a perfect bonus of 200.000 points per level (if one of them is missing each star is worth 10.000 points only). Every surplus speed-up or shield item also adds more to the score (5.000 and 20.000 points, respectively). Finally, upon completing the game the player is awarded with 100.000 points for each life in reserve (the extend rate is one extra life for every 300.000 points). This extend rate and all of these bonuses apply to the Normal difficulty and have increased figures whenever you play on higher difficulties – which must first be unlocked by clearing the game on the previous difficulty setting, continues allowed.

There’s a rudimentary rank system in effect that seems to be based on survival time and gets totally reset upon death. Stage 4 in particular is where enemy aggressiveness becomes more noticeable if you get there without dying. Playing on harder difficulty settings comes with a few twists here and there, such as different terrain, rearranged enemy formations or new boss attacks, so it’s not just a matter of increased bullet density or speed. And the coolest thing for score chasers is that each difficulty has its own high score display and every run can be saved as a replay file. There's also a very handy and fully customizable Practice mode.

Even though I managed to unlock the extra difficulties, my goal in the game was to finish it on Normal with one life while collecting all bonus stars (result below). As polished as it is, my only gripe with Satazius is that it didn’t allow me to use the d-pad on my 360 controller, forcing me to play with the analog stick. The game was savored by means of the Steam digital distribution platform on an HD TV with the following PC configuration: Windows 8.1, Intel Core i5-4210U @ 1.7/2.4 GHz and 4 GB RAM. 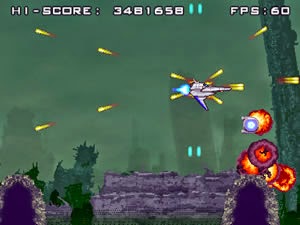