An apology to longtime Wonder Boy fans: don't expect me to know anything about the series, I have no understanding at all of its broader platforming or RPG elements. As a shooter appreciator, however, it wasn't long ago that I was drawn to Wonder Boy III - Monster Lair by the advice of a shmupper friend. And having recently beaten the arcade original on the PS2, I can safely say that at least this chapter is well-known to me. Under all circumstances I think the game's concept fits home consoles better than it does the arcade format, even though the Mega Drive conversion incurs in several cuts from the original. While the port for the PC Engine CD appeared both in Japan and the US, this particular version came out only in Japanese and European territories.

Monster Lair is a mix of platforming and shooting, both implemented with autoscrolling and providing a simple, dynamic gameplay mainly based around on-the-fly resource management. Co-op play is available, with player 1 controlling a boy and player 2 controlling a girl princess against hordes of cute monsters that have taken over a colorful fairy tale land. The Mega Drive port does a good job in preserving the original atmosphere despite the slightly rearranged designs for characters, background and enemies. Everything is slightly darker or comes with more dark shades, probably to disguise the less powerful color palette of the platform. It keeps the charm and lends it the expected consolized flavor, something the soundtrack is also perfectly capable of delivering. 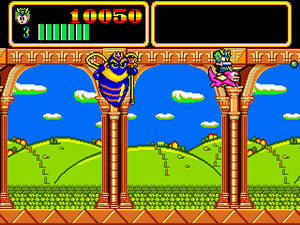 Pursued by an angry queen bee

Each stage in this game is divided in two parts. The first part is a regular platforming section where button B shoots and buttons A and C are used to jump. Every platforming area ends with the character(s) entering a dungeon in order to play the second part of the stage, a shmup section where you ride a pink little dragon and face a series of stage-related enemies and the big boss at the end (only button B is used in the shooting areas). Throughout the game you'll come across different weapons released by killing specific enemies (platforming parts) or destroying complete enemy waves (shooting parts). Weapon items disappear fast after a little blinking, each weapon lasts for 10 seconds only when active and if you don't take another one before that you'll be back to the default pea shot.

Initially it might take some time to actually notice that the character’s health is being constantly drained as you advance through the platforming parts of the game. Refilling health is performed by taking new weapons or by collecting the fruits that appear out of nowhere. Running out of health causes the character to die, as well as getting in direct contact with any enemy. Health depletes faster whenever you get hit by one of those balls or trip on a pile of mud on the ground, which makes you dart forward dangerously. Thankfully there is no health draining in the flying areas.

Weapon behavior does not change at all from one section to the next. There's a ring spread, a thin drill shot, two-way fireballs, a spiralling ring of fire, rotating shurikens and exploding missiles. Getting comfortable with how each weapon works is essential to succeed in Monster Lair, especially when you consider that there is no autofire at all. A turbo controller isn't really necessary because in this version weapons seem to have been better balanced overall. The default shot, for instance, is a lot more efficient than in the arcade original, whereas missiles have lost most of their brute power. Their effect is still bound to how long you press the fire button though (tap to make them explode closer to you, hold to allow them to travel farther). Finally, the drill shot is still the only weapon with built-in autofire.

In adapting the game to the Mega Drive, Sega removed five stages and toyed a little with the assets that remained. The difficulty was toned down as a whole, but while bosses are considerably easier the flying enemies became a little more aggressive (in a few levels it’s rather hard to kill all waves). Item randomness was reduced and magical fairies are less troublesome (hit and take them to collect the reward). The pink fairy transforms all fruits in cakes that are worth more points and refill more health, the green fairy gives you temporary invincibility and the black fairy removes your current weapon. By the way, it seems that black fairies were overlooked during the porting process because they appear in only one stage and are rather hard to reach. They’re useless, just like the animation bug where the boy hangs to the tip of a platform (needed in the original game, useless here). I died several times on a moving platform in the fourth stage because the game got me stuck in that stupid position.

I haven’t tried to play Wonder Boy III in co-op, but I don’t think it would be as good as playing solo. I ran across heavy instances of slowdown in a few places, all of them in platforming areas and mostly when the screen scrolls diagonally with parallax layers in the background. Even though removing five stages might seem an indication of this being a mutilated port, it actually makes the game feel less repetitive. Only one ice level and less castles allow the other levels to stand out more, including that infuriating desert stage and the village with mushrooms that pop out those balls upon getting hit. Several parts of the game are still very tricky to get through, but fortunately you get three score-based extends with 50, 100 and 180 thousand points.

It’s true that this game isn’t as cute as other platformers on the Mega Drive, nor are its shooting segments as engaging as most shmups on the system. It’s okay and reasonably fun if you’re in the right mood though, just don’t expect anything bombastic. Here’s the final score in my 1CC run on Normal/Average difficulty. 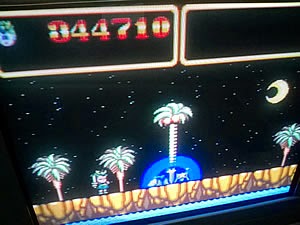