Experienced arcade shooter fans know that Toaplan has an enthralling history. From the early days of Tiger-Heli to the swan song delivered in Batsugun, the company was always present in the arcade scene with trend-defining games, of which Flying Shark is certainly one of them. Known in Japan as Hishouzame and released in some areas around the world as Sky Shark, the game explicitly borrowed ideas from Capcom's 1942 while kickstarting a streak of in-house shmups that's recognized today as one of the most charming old school branches in the genre. It's also the first chapter of an unofficial series which also contains Fire Shark, released in the arcades roughly two years later.

Few systems received ports of Flying Shark soon after it came out. The only mainstream console adaptation is the NES version titled Sky Shark, while all other ports appeared in obscure home computers only. This FM Towns version is one of them, a very close take on the arcade game in both graphical and gameplay merits except for the characteristic screen ratio that turns the playing area slightly into a square. Since the porting job wasn't really optimized for this, the upper part of the screen is partially cropped and the player loses sight of what's going on up there. It's as if we could only view 85% of the original screen even though it seems to have been ported faithfully from the original game. As a result, there are several instances where enemy shots seem to be coming out of nowhere. It's a little disappointing, but at least it doesn't break the gameplay. 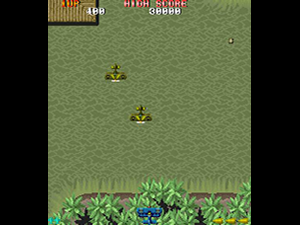 Take off every shark!

No frills and straightforward plane shooting action is what defines Flying Shark. Press B to fire your weapon and press A to bomb. If you see a wave of six red enemy planes kill them all to release a power-up labeled as S, take it to add an extra firing stream to your gun and see if you can survive to max it out at five powerful streams (meaning you max out with 4 power-ups). Most of the other characteristic six-plane waves are beige, and by destroying them you get an extra 1.000 points. And if you're lucky you might also come across the light blue wave, which will then release an extra life (1UP). Extra lives are also score-based and granted with 50.000 points and for every 150.000 points afterwards. Lastly, watch out for a red symbol that appears from a few ground enemies, each one of them adds an extra bomb to your stock.

The overall setting of Flying Shark goes by the book and doesn't veer into anything extraordinary. Jungle, oceans, desert, variations of each, repeat. Small planes of all colors approach in the most different patterns (each color presents a particular behavior), larger planes cruise the screen from time to time and a few huge bombers appear here and there. Tanks, boats, turret-ridden ships and big mean railroad panzers compose the terrestrial resistance, which gets more and more aggressive the closer you get to the end of a level. Despite this humble collection of assets and the absence of regular bosses, the game succeeds at combining them to deliver a fun and challenging experience where natural progression mostly comes from memorization and clever crowd control. And let's not forget about the great music, which in this port received an awesome remix.

Part of the difficulty is directly related to the plane's firepower, since the more powered-up you are the faster enemy bullets will get. It's a rather simple rank system that benefits players by allowing them to predict how aggressive the game is about to become at any time during play. You just need to be careful not to let the power-up go away once it's released because as the icon comes down bouncing it won't return at all if you let it disappear at the bottom of the screen. Note that bombs can't be used as panic relief because they explode in a spiral pattern, blocking only the bullets that are close to the blast radius. Bombs are also a precious source of points because each bomb in stock is worth 3.000 points at the end of the level. No matter how you stand as you collect this bonus, the game will always reset your bomb stock to three before you take flight again.

Some details in the gameplay can certainly help the player survive longer. For example, each flying enemy that enters the screen will fire a single bullet only and follow its predefined path. There's a safety point blank distance in place for ground enemies (namely small tanks and turrets) where they won't be allowed to fire at you at all, so exploit that whenever possible. The six-plane waves will always appear on the same position and will never shoot any bullet, and if you lose a power-up or die they might switch colors in order to allow faster powering-up. Beware of slow planes coming up from the bottom of the screen and point blank whenever possible to kill them faster. And as a general rule, keep moving while avoiding to stay too close to corners.

Flying Shark adopts the same looping scheme previously used in Tiger-Heli: it disregards the first stage completely and also measures player performance by "areas" reached. As usual, each further loop increases enemy bullet speed considerably. Despite the image cropping issue, Flying Shark on the FM Towns is excellent for a home conversion. Mild quirks consist of brief loading times and an annoying continue countdown screen, where any button on the controller will trigger it. The only in-game limitation is related to a few severe bouts of slowdown, seeing that the game stutters heavily when you bomb at crowded spots (such as the huge plane bomber in stage 2 or the battleship that goes upwards at the end of stage 3). In the options screen you can select between four autofire settings, as well as choose between four display resolutions.

I had a blast playing this, with the results of a lazy relaxing afternoon shown below. I played on Normal with auto shot set to 4 and reached the third stage on the 2nd loop. 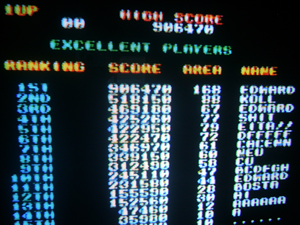