Long after the Neo Geo was dead a small German company decided to declare its love to the platform by releasing Last Hope, a game strongly influenced by R-Type and Pulstar and in true Neo Geo fashion marketed as a “tactical shooting game”. Produced in extremely low quantities and involved in a small scandal about its cartridges being built by reusing the carcasses from old SNK games, Last Hope gained an infamous aura of being an extremely hard shooter due to bullets having the same colors as the debris coming out from regular explosions. As with many other cases of such undeserved fame, Last Hope is nothing of the sort, after all it doesn’t even top the difficulty level of the other two games mentioned in this paragraph.

Debunking the myth doesn’t take much, actually. Indeed the first stage of Last Hope is leaps and bounds above the difficulty of pretty much all first stages of any horizontal checkpoint-based shooter out there. However, when you finally come to grips with it and start progressing through the rest of the game you realize the developers seem to have tried to wow players in every way they could from the get go. Steep difficulty needed to be there in order to match the cool music and the awesome graphics – clearly above anything 16-bit – hence the excruciating wall of the first level. But hey, once this wall is climbed and passed everything feels more natural, to the point where Last Hope finally becomes an enjoyable experience.

Like most of the games explicitly inspired by R-Type, you only feel you have some chance of surviving the odds after you acquire the force pod, which in in this case is permanently attached to the ship and can be rotated around it and locked at 8 different positions with buttons B (counter-clockwise) and C (clockwise). Button A is used to shoot and to charge the plasma beam. The act of picking any power-up creates the force pod, which arrives slowly from the left side of the screen and initially latches to the front of the ship. The pod protects it against all sorts of regular/round enemy bullets while firing a single soft projectile alongside your regular shot/charge. Note however that it doesn’t inflict any damage whatsoever. 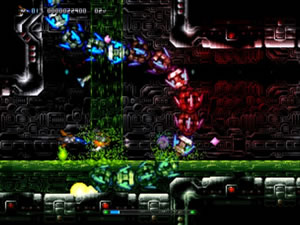 Items can be either concealed inside slow carriers or appear floating from the right side of the screen. The brown ones are speed-ups, all others initially only provide the force pod. Upon collecting the second item you get a specific type of side weapon: cluster air/ground bombs are orange, straight “carbon” missiles are green and homing missiles are yellow. A third capsule of the same weapon will then upgrade its strength. All of them are useful, but the homing missiles are definitely not recommended against the most resilient enemies. I often try to keep them only during the 5th stage because they’re great against the kamizake ships that home into your position. On the other hand, straight missiles are a devastating aid if you decide to mash the button against bosses.

In the world of Last Hope memorization is king. Players will get nowhere without prior knowledge of what’s coming since all six stages have a good share of hazards and traps. Besides all the R-Type influence I can also see references to Parodius Da!, X-Multiply, Rayxanber and a general throwback to the euroshmup school of thought reminiscent of the Commodore Amiga days. Fortunately NG:Dev.Team uses the euroshmup inspiration wisely, as in the way enemy waves approach so that you’re able to finish them in one single blow with the plasma beam to collect the associated multiplier bonuses. Each successive enemy killed with the same shot adds ×1 to this instantaneous multiplier, which is then applied to the next enemy in the chain.

Chaining enemies with the plasma beam is the only real way to boost the score besides exploiting loose projectiles from enemies, picking up all those bits worth 500 points and not dying (when the stage is completed you get a bonus based on the amount of bits collected since your last death in the level). Certain places in the game are better suited to the plasma beam for higher multiplier points, as in the fight against the second boss (kill him while blowing up the bubble he spits) and the first checkpoint section of the third level. There’s a mild rank system in place that increases the amount and speed of enemy bullets the longer you survive. An interesting observation about the speed of the ship is that it gets reset in every level, so no matter how many speed-ups you take you'll always start the next stage with the default sluggish maneuverability. It's not as bad as it sounds, believe me.

Speaking of checkpoints, there are three of them per level. And for a game that’s so demanding up front, having unlimited checkpoint continues is really welcome. From the enemy base of the first stage to the biologic mayhem of the final level, players still need to defeat the mandatory waterfall/corridor with rocketing enemies in the second area, followed by an outer space scramble into a dark lair in the third. Then there’s the odd mix of moving volcanoes and large battleship of the fourth stage, which leads to a moving hell of blocks, lasers and turrets in the second-to-last level. Despite its derivative nature I can’t help but praise the variety in the design of Last Hope, as well as the soft nature of the game as a whole, the great use of colors (lots of blue and green!) and the absolute lack of slowdown. The enemy gallery is equally diverse, and it’s particularly interesting to see the remarkable amount of invincible snakes everywhere. And I wouldn’t mind having those B&W animation snippets lasting a little longer in between levels, they’re quite impressive.

Such polish from an unlicensed independent shooter is definitely rare and must be commended, even if Last Hope incurs in some odd functional aspects. The fonts for the score display, for instance, are extremely small. The 50.000 points extend routine doesn’t always register in the life counter, and it’s not uncommon to hear that ominous 1UP voice in between levels or die on your last life and still come back for another final chance. After the first loop is completed the game keeps restarting in a harder setting, eventually locking on HARD for all eternity from what I heard.

The short demo shown in the attract mode can be accessed at any time from the start screen, as well as the options with alternatives to rearrange inputs and enable/disable the music. After coming out for the Neo Geo AES the game received some slight tweaks on the ports released for the Dreamcast and the Neo Geo CD. Later on a revision titled Last Hope Pink Bullets addressed the assumed high difficulty of the game by coloring its bullets pink and aggressively altering the original gameplay. Pink Bullets came out for the Dreamcast and the Neo Geo AES.

In the high score screen below I reached stage 2-5 on Normal difficulty. Those stats are a nice touch but don’t make much sense in the end. Let it be known that my cartridge is a conversion – the authentic one was and still is an extremely overpriced item for AES collectors. 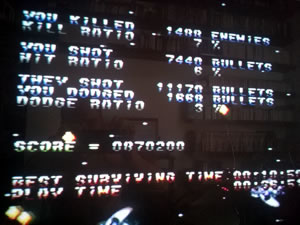