When I think about the fact that Thunder Force V came out more than 20 years ago I can't help but feel a sting of nostalgia. Back then I had completely left video games in favor of college, and would only get to experience the game some ten years down the road. It was also the very first shmup I purchased for the Sega Saturn once I started collecting, so I guess that says a lot about my appreciation for the franchise. Why Sega and Technosoft didn't release the game out of Japan is beyond me. I absolutely don't buy the idea that a game like Thunder Force V wouldn't sell well in the West, or that shmups were already a dead genre by then.

The leap of Technosoft's most famous series into the 32-bit video game generation is everything fans could hope for. Granted, Thunder Force IV / Lightening Force set the Mega Drive on fire, something that can't be said about Thunder Force V and the Sega Saturn. Nonetheless the sequel successfully expanded on the ideas of previous chapters, taking the gameplay to new heights while remaining faithful to the atmosphere and the general feel of the series. It's still frantic, clearly methodical and heavily bent on memorization. Graphics are a mixture of regular sprites and 3D models based on polygons with varying textures. Even if they might seem dated to some people by today's standards, they've still got a lot of charm and a healthy dose of sleek cinematic transitions. Let's also not forget about the excellent soundtrack. Following the trend of previous games in the series, the order of the three initial stages can be established as soon as you start the credit. Commands are fully configurable in the options and work with shot, two directions for weapon select (right/left), speed selection and overweapon. This overweapon input is the most important gameplay addition in Thunder Force V. Whenever you press this button the power of your current weapon is augmented at the cost of the energy of your options/claws/craws. Craws are single energy spheres that rotate around the ship, increase its firepower and protect it from regular bullets. You can have a maximum of three craws at any given time, but if they're hit while their energy is fully exhausted (by using an overweapon) they will disappear. Exhausted craws recover energy with time, but can be replenished faster by collecting new craws.

Craws are one of the items you get from harmless carriers or special enemies. Other items include the non-default weapons (wave, free range and hunter), shields and extra lives (1UP). The only weapons you don't lose when you die are the default ones (twin shot and back shot), all others are lost and need to be reactivated with another weapon item. Shields give you protection against three hits: a blue shield means you have 3 hits left, a green shield means you have 2 hits left and a brown shield means you can take only one shot before becoming vulnerable again. Once you die your craws will scatter around the screen and bounce for a while so that you can pick them up again. As for score-based extends, they are granted with 10, 50, 100 and 500 million points.

In line with the evolution of the genre by the late 90s, which demanded more than just mindless shooting and flashy explosions, Thunder Force V includes a scoring system of its own. It's essentially very simple: the faster you dispatch mid-sized and large enemies (including bosses) the more points you get based on a multiplier that goes from ×2 to ×16. There's also a completion bonus based on the chosen difficulty, the number of lives left and the final equipped weapons, which is once again a noble incentive for players to polish their performances as hard as they can. There's a catch related to this completion bonus though (keep reading).

As far as speed-killing goes, it doesn't take long for you to realize the extreme importance of the aiming and overweapon capabilities of the free range shot. When properly used, it's able to easily dispatch most enemies and several boss phases with ×16 multipliers (note that it does even more damage when enemies are hit within range 1). The other weapons are useful in their own right, but there's no doubt that dying and losing free range severely limits scoring and survival possibilities. Free range is, in fact, the reason of many complaints regarding gameplay balance in Thunder Force V. While that's a valid point, personally the only fault I could attribute to free range is making the game an easier ride. Once you learn how to lay waste to everything with it, of course.

Each stage in Thunder Force V is quite unique in its environment. Sea, jungle and city precede a space station guarded by a transforming mecha boss. Then comes stage 5, which brings a treat for fans of the series, especially those who played the previous chapter. First you're propelled to outer space by docking to a sword-shaped shuttle with a shield bar and its own firepower capabilitites (two special weapons only used in that level), then you have to face none other than the Fire Leo-04 Rynex, the original ship from Thunder Force IV, as you listen to the epic opening theme of that game in one of the most iconic moments in the whole franchise. Defeat it and play the rest of the game with improved versions of the default weapons, the same ones seen in part IV (twin shot turns into blade and back shot becomes rail gun).

Thunder Force V also boasts a rather complicated storyline depicted in the animated opening, in the details shown prior to each boss fight and in the ending. There's a catch though: in order to see the good ending and understand how the story arc closes you need to beat the creepy insect-like last boss within a time limit. If he escapes you get a bad ending and you're denied the completion bonus. High score tables are segregated by difficulty and show a few stats for each logged run. Some extra tweaks can be applied to the game, such as setting the weapon HUD in different arrangements. Bonus note: beating the game on Hard unlocks a special Master difficulty.

Besides the regular retail release the Sega Saturn also received a special edition of the game called Thunder Force V Special Pack, which adds a bonus CD with rearranged tracks of previous games titled The Best of Thunder Force. A port was released a year later for the Sony Playstation under the name Thunder Force V - Perfect System, and while it does look like the Saturn original there are still noticeable differences I intend to point out in the near future. As for the series progression, it would take more than ten years for the sequel Thunder Force VI to appear on the Playstation 2.

In revisiting the Saturn version, my best 1CC result in the Normal difficulty is the one shown below. It represents an improvement of 42% over my previous highest score, achieved when I didn't have much of a grasp of scoring systems at all. 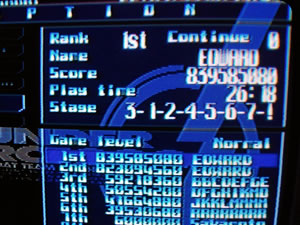