With the release of this compilation in 2000, Gradius fans were finally getting the cream of the crop in regards to the arcade chapters of the series. Most interesting is the fact that Gradius IV had been released just a year prior, exactly 10 years after Gradius III and a couple of years since Gradius Gaiden had hit the previous video game generation on the Playstation. I'd certainly be thrilled to play an arcade-perfect port so soon after launch, even though these days the general concensus is that the fourth arcade chapter falls a little flat in its attempt to continue the legacy held by Gradius Gaiden. This is certainly debatable, but regardless of any relative merits gamers ought to pay respect to Gradius IV, after all it still stands as the last Gradius game ever released for the arcades.

By choosing to play Gradius IV in this disc players are welcomed by a rather different experience to the one posed by the excruciating Gradius III. Up front there’s the higher resolution for graphics and a series of neat graphical effects. Coupled with a more straightforward set of gameplay options, these aesthetical refinements end up creating a very distinct visual identity, one that builds upon the colorful design of Gradius Gaiden while recycling a few key areas of previous chapters. Checkpoints are still to blame for the perceived excessive difficulty, but the good news is that no matter where you die in Gradius IV it will always be possible to get back up with some practice and patience. This alone corrects one of the issues that made arcade Gradius III such a legendary nightmare... Impossible checkpoints are a bitch and not so many people are willing to deal with them.

This time around Vic Viper returns to battle all alone with fixed weapon configurations, as opposed to the different ship types and weapon edit modes of Gradius III and Gradius Gaiden. There are six variations to choose from, plus the mandatory choice of shield or force field. Regardless of the chosen configuration, all upgrades are applied with collected power-up capsules and proper management of the weapon array, which evolves in the following order: speed-up, missiles, double/tailgun, laser, options, shield. Screen-clearing gray capsules appear from time to time, as well as the option thief bug if you manage to survive long enough while powered up to the max. 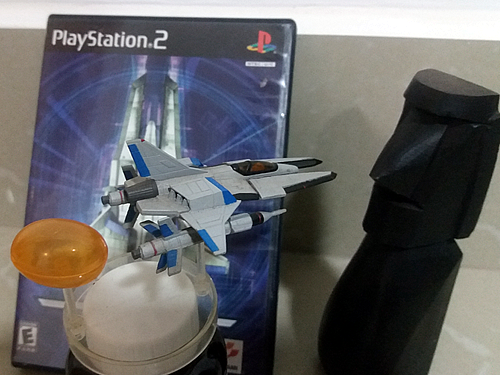 A postcard from battle

The first four configuration/ship types have already been seen in previous games and are very familiar, but the last two come with some new ideas. Type 5 introduces vertical mines as missiles, which take advantage of the ship's momentum so that players can perform crazy stunts with them. Type 6 has flying torpedoes that are naturally fired forward when using rapid missile, or travel vertically and dart forward by holding and releasing the missile button (not rapid); upon touching surfaces the flying torpedoes will then move forward. I dabbled a bit with them and then decided for type 6, but the determining factor was the laser: type 5 has a long pink laser that takes forever to recharge, whereas type 6 comes with the best laser in the game, plus the much useful tailgun instead of double. For button layout I had rapid shot/missile set to ×, missile set to □ and power-up set to R2.

By the way, there's a common idea about Gradius IV that all lasers suck when compared with the default shot, except for type 6's twin laser.

In keeping with the tradition of the arcade titles, double upgrades for missiles and laser as seen in Gradius Gaiden are gone. Rank is still in place and contributes a lot to the increase in difficulty the more powered up you are and the longer you survive. If you play the game long enough it's possible to know how hairy things are gonna get depending on your performance. Fortunately, as mentioned above, Gradius IV will never make you outright give up on certain checkpoints as Gradius III did, and that's a great plus in my opinion. Never mind how stage select mode is obtained here (by 1CCing the game, altered lives/difficulty allowable), after I got it unlocked I used it only for a short while on the moai level. Then I decided to hammer the game the old fashioned way, that is, by continuing multiple times and as long as I needed to get comfortable with every single stage.

Speaking of stages, allow me to break them down and add some insights for reference:

To the fortress on one life, then panicking through the rest of the credit

Looking back in retrospect, Gradius IV had it all to be the best title in the series. There are however a few key aspects that undermine its appreciation, especially for seasoned fans. One of them is the evident unbalance in difficulty, made explicit by some petty boss encounters and a couple of challenge spikes that feel clearly displaced. Case in question: moai and cell. Given how oppressive these stages are, seeing them for the first time at full rank can be frightening. I was in awe of how much pressure one has to endure there! And then when you get past that you face a comparably easier stretch until reaching the final fortress. I certainly can't complain, but this definitely isn't good for the game's pace/flow. As for bosses, Rolling Core (high speed) and Planet Core (boss rush) are a disappointment. Fortunately all other bosses are relatively engaging, except for the first and the last ones of course. The other minor aspect that might cause some controversy is the soundtrack, which is nice but gets kinda sappy in the final stage.

When coming directly from Gradius III, as was my case, the fourth chapter certainly feels more relaxed and less hard even though it's not an easy game by any means. Like I mentioned above, it obviously wins lots of points for having no impossible checkpoints, but it still has them and getting comfortable with the most delicate ones can take quite some time. As usual, Gradius fans will feel at home while neophites will feel the pain and most probably yell in protest. The extend routine starts at 70.000 points, continues at 150.000 points and proceeds with extra lives awarded at every 150.000 points afterwards, so it's not that many extra chances in a first loop campaign. The second loop brings lots of changes in the scenery, to the point that it feels like a completely different game and a completely distinct challenge.

On the scoring side of things, the game is even more simple than its predecessors. Power-up capsules are worthless, and enemies killed with the gray capsule don't result in any points whatsoever. A little milking is possible in certain areas or bosses, but nothing major. What's most important, as it has always been with this series, is the sense of fun and the larger than life feeling of defeating a powerful enemy against all odds. It feels grand, it makes you feel powerful like few other old school shmups do.

The Gradius IV branch in the Gradius III and IV disc has the abovementioned stage select feature unlocked with a 1CC (which also unlocks a boss rush mode), auto save and the ability to choose full screen or the original arcade resolution (which produces minor horizontal bars on a regular TV). Since the game already runs at its native speed, a wait/slowdown option like the one seen in Gradius III does not apply here. My final high score was obtained in difficulty 4 (medium), type 6 configuration + force field, arcade resolution. I was able to reach stage 2-2. 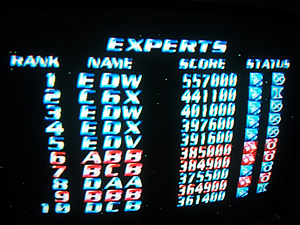