Lovers of the Gradius series owe themselves a great deal of thanks to the Konami of old. As we entered the new millennium they were still capable of presenting shmup fans with stuff like Gradius III and IV for the Playstation 2. This fantastic bundle doesn’t need any explanation as to what is inside that shiny blue-tinted CD. As far as I know these are the only ports of the last real arcade Gradiuses, wrapped in a package that’s enriched by a few nice tweaks and two distinct animated intros that work as a sweet homage to the series. One of these intros is, in fact, very similar in style to the psychedelic intro to Mars Matrix on the Dreamcast. Were they made by the same team, perhaps? I wouldn’t doubt that.

The most well-known fact concerning the arcade version of Gradius III is the consensus among gamers about the extraordinary leap in difficulty from Gradius II, which isn’t actually that shabby in this regard. You’ll often see people cursing the checkpoints in the game and how it's impossible to recover when you die. Now I can say that’s partially true, and I take the opportunity to grant forgiveness to the SNES port for everything I might have declared in the past. Much accursed for its alleged slowdown problems, now I know that this slowdown was *already* heavily present in the arcade game (judging by what I could see from MAME). With four options/multiples the slowdown was so heavy in the last part of the volcano stage that very early on I decided I would play without the slowdown on the port for the Playstation 2.

This slowdown tweak is one of the neatest things you get in the console version. Go to the options and set “wait level” to 2 in order to experience the original slowdown, but leave it at 0 to get rid of it and enjoy a seamless game with no loading times whatsoever (you can also change it on the fly by pausing the game). Gradius III has absolutely no continues, but each checkpoint reached is unlocked in the Stage Select option for your suffering delight. You even get to unlock a special practice area for the dreaded cube rush in the “Extra Mode” screen, which also includes Gradius / Salamander bonus stages (unlocked by getting hit by the energy balls from the final boss) and Extra Edit (allows selection of weapons from all ship configurations, including the exclusive ones from the SNES version / finish the game to unlock). 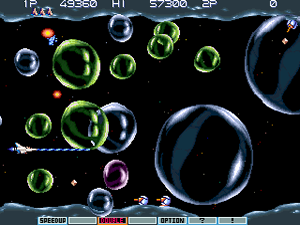 Pop the bubbles to go from legend to myth!

As the story goes, the Vic Viper spaceship returns to battle the evil Bacterion army in Gradius III. Not much has changed from the basic gameplay of earlier games, except for the weapons rearranged in four basic configurations (A, B, C, D), a limited weapon edit alternative and several shield options. Besides that, the player must choose between the technical course (regular game) and a beginner’s course (easier game with only the three initial stages). By default one button shoots, another drops missiles and a third one triggers upgrades. These upgrades correspond to the highlighted cells of the weapon array, which in turn is cycled by collecting orange power-up capsules. The order of the cells in the weapon array is as follows: speed-up, missile, double, laser, option/multiple, ? (shield) and ! (a screen-clearing smart bomb that replaces the effect of the gray capsule seen in previous chapters). Each configuration plays drastically different from the next, to the point where you need to practically devise completely different strategies to play the game with each one of them.

Sounds pretty simple, wouldn’t you say? Yes, there are no complications in the way controls work. Using them to overcome the odds is a whole different story though, for brutal is the most common word used to describe Gradius III and its checkpoints. One of the early examples in the game is in the bubble stage, which is merely the second one and also the reason why most casual players remember it as a painful experience. Dying there makes getting back on your knees simply impossible, and in my opinion the same can be said about a few parts in the volcano, moai and fortress levels. Whenever it happened I would give up the credit immediately. While these checkpoint drawbacks certainly pose extra pressure upon players, they also tell you up front to accept the challenge as it is: relentless, ruthless, vicious, merciless, you name it. Playing a full credit for over half an hour to die horribly in a place where you just can’t recover? Oh, I’ve been there countless times, as I’m sure those who’ve already been there also were...

Of course that doesn’t mean Gradius III isn’t fun. It’s just that the fun in this case is irrevocably related to the player’s dedication and the overall sensation of achieving a grand objective in a shooter of epic proportions. Each level won feels like a small victory, but coping with all variables and hazards still takes lots of practice because more often than not the game likes to throw something different to screw things up. The asymmetrical stage lengths help keep things in perspective – the volcano (3rd) and fortress (10th) levels are very, very long, in a strong contrast with the brief rail segment of stage 4. That one is an anomaly in the Gradius universe since it only appears here, acting as a bridge between levels that are common to both courses and levels that can only be played in the normal course. This section is devoid of enemies and you're not allowed to shoot, only weave through wall corridors and collect power-up capsules. The cool thing is that any shield you had prior to entering the level is fully recharged when you come out of it directly into the moai stage.

Allow me to break down the game in stages:


Things got kinda nervous at the end of this 1CC...

The reason why I never got past the fire stage with a fullly powered ship without dying is rank, which is directly related to your firepower level and survival time. Enemies don’t get any more sympathetic either if you give away all your options to the capturing bug before entering the fireball area. The truth is that reducing rank is only really achieved by dying, but in a good run where I perish in the fire level I feel comfortable to bridge the game to the end if I can get “good” cubes in the cube rush. If I get a stream of “bad” cubes the earned extends are much welcome to provide extra attempts at surviving them (first one with 20K, then at every 70K).

Just like in the first games in the series, the scoring system of Gradius III is very basic and totally detached from any more noble objectives due to the checkpoint system. For instance, a no-death run would result in a measly score when compared to a credit where the player exploits the cube rush or the boss rush checkpoints. I have gotten several scores higher than the 1CC result shown below but refused to have them registered because, you know, for me it's 1CC or bust.

There isn’t anything special about the graphics of Gradius III especially when comparing this chapter to the second one, which came out just one year earlier. Everything is just cruelly exquisitely designed, that’s all. Musically the game is okay in the recycled levels (volcano, moai, fortress) and quite good in the ones that bring new themes (bubble, cell, plant, crystal). Digitized voices are everywhere, from activating upgrades to the creepy monologue of the final boss and the trademark bossy messages (destroy the mouth, destroy the eye, destroy the chest). In between each lesson learned when being killed the umpteenth time by one of the bosses or crashing onto a wall due to nervousness or greed, my final impression is that Gradius III excels at flooding the player with feelings of joy and anger in equal measure. At least it doesn’t tease you like Gradius II did (you need some practice!), otherwise the anger factor could be even higher.

I am proud to say I have succeeded in beating Gradius III for the Playstation 2 on Normal with slowdown disabled (wait level 0). It was a joyous ride full of failure, yet extremely rich in acquiring deep Gradius knowledge. I used the type B ship configuration and the original shield (force field), reaching the middle of stage 2-1. Note: besides being a lot harder, the second loop has completely rearranged enemy patterns. 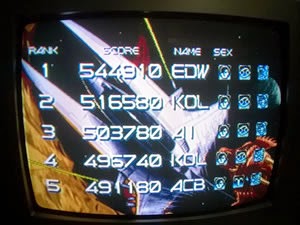 Next in line is Gradius Gaiden on the Playstation!
Posted by Edward at 10:18 PM