About a month ago Xexex was chosen as game #2 in the STGT annual tournament at the shmups forums. Needless to say, I was thrilled. Ever since I laid my eyes on this game, while briefly testing my recently acquired Salamander Portable on the PSP, I was equally amazed by how good it looked and how uninformed I was for not even knowing about its existence. I think the reason why the game was included in a Salamander compilation is its graphical similarity with Salamander 2, even though it hasn't got anything in common with the Gradius universe at all. It's quite different actually, in a way you wouldn't really expect: in a closer look, Xexex is Konami's obvious take on the R-Type formula.

Xexex has this special flavor that R-Type fans know really well. It's a gorgeous game to look at, but it's also punishing to the point of frustration. I started playing it on MAME for the tournament, but as I got away from the computer I shifted to the PSP version, which is exactly like it with the advantage of being able to turn off the slowdown (thus making it an even harder challenge). I wasn't able to deliver a good performance because I got stuck with the odds from the 5th stage, and only recently I returned to it with some reasonable time for practicing and no peer pressure. 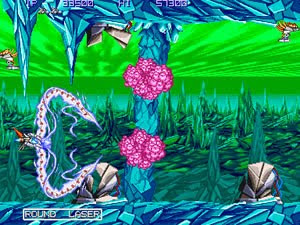 Menacing weapons against spikes and brains on the 1st stage

The story in this game seems to revolve around rescuing a girl from the claws of this androgynous blonde bad guy. After receiving her intergalactic cry for help there goes the insect-like spaceship, cruising through a boundless green sky landscape with only a pea shooter. However, soon enough upgrades arrive. One thing to notice about weapons in this game is that there are no power-ups. There's a good array of weapons, but they don't evolve and are changed with icons released by killing blinking enemies or by hitting some secret spots (they also release speed-ups). The "flint" - which is the equivalent of the "force" in R-Type - is the only thing that can be powered up: an organic, indestructible living pod that grows an extra arm with each new power level (up to 3), and can remain attached to the front of the ship or released so that it can kill enemies on its own. While the flint is attached you can charge the weapon for a destructive organic blast (imagine Marrow's special attack in MvC2). If the flint is detached while charging it will be tossed forwards; with no charge, it will just be released to wander off close to the ship. Autofire is enabled whenever the flint is detached, a subtle yet very welcome and functional gameplay aspect.

Knowing when to release and how to influence the flint's behavior for attack and defense is a key factor for winning. I say "influence" because it's not really possible to control how the flint behaves. Once this thing is deployed, it moves a bit approximately every 3 seconds, in a visible attempt to reach the closest enemy. Its arms will embrace the enemy if possible, thus inflicting a great deal of damage. Sometimes this is impaired by walls, scrolling or conflicting enemies, leading to erratic, unpredictable maneuvers. Another thing: once the flint is called back, you can't release it again until it has docked.

What makes the design of Xexex special are the several details spread throughout the whole game. One of them is this brain energy source that's present in all major enemies. It represents their weak point, and is fiercely embedded in the game's design from start to finish. The insertion of enemies and backgrounds constructed around the X character is another subtle touch (during boss confrontations especially). Xexex is also remarkable for having a very diverse set of environments, enemies and bosses, as well as lots of rotation and warping effects applied to them. The whole 2nd stage, for instance, feels like a Skittle-flooded candy oasis, while the whole 5th stage takes place inside a virtual reality environment, with all the enemy armada dangerously materializing out of nowhere. Note: I had a hard, hard time mastering this level!

The soundtrack doesn't have any standout tracks, but it complements the game's atmosphere with very good results.

The biggest criticism I can mention on Xexex is the way power-ups are displayed. The icons are very confusing for beginners, and it takes a while to get used to all of them. I recommend waiting for the whole attract mode to run so that you can see a very comprehensive tutorial on how each of the weapons work. This is important because some of them offer a huge advantage when playing certain parts of the game (homing laser for stage 4 is a classic example). Another conflicting point is the nature of the extends. They are totally random and only appear from one of the secret icon spots. It's very hard to come across one of them, so don't count on extra lives if you want to see the end of the game.

All hori fans, especially R-Type additcs, owe themselves at least a look at Xexex. It's regarded by some people as the most unique of all Konami shooters, and as such it alone makes the Salamander Portable compilation a worthy investment. Never mind the European and North American arcade versions, which added a health bar to the ship and disfigured the original game horribly.

Here's my high score on NORMAL, frame drop OFF, reaching the 1st level in the 2nd loop. It's a lot better than my best result during the 2nd week of STGT 2010. By the way, let it be known that way before Psikyo introduced those crazy second loop dificulties Konami did it first with the second loop of Xexex. It's that crazy! 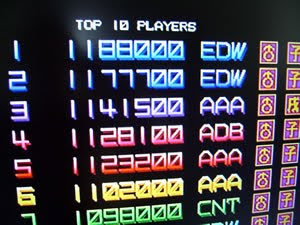