In the second game for the PC Engine, the Gradius series was promoted to CD quality stuff by Konami. As a consequence, Gradius II turned out to be one of the highlights of NEC's CD add-on. It's a superb game in all aspects and an outstanding conversion of the arcade original, with the only difference being a slight reduction in the challenge level. And just like in the Gradius HuCard, the sequel also received an extra stage, which in turn was used as the basis for the first level in Gradius III. Another extra is a completely new intro sequence showing Vic Viper getting loaded with weapons and launching into space to kill alien spaceships and destroy their cores.

The original intro makes it clear that Gradius II follows Salamander and incorporates several gameplay aspects introduced by the spin-off series. This is the main difference from the concept created in Gradius, where you had only one weapon array defined by speed-up, missile, double shot, laser, option and shield. Gradius II spices up the experience by allowing the player to choose from four weapon arrays, as well as two types of shields. 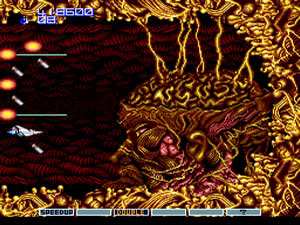 Dude, what did they do to you?

Now there are also spread bombs, photon torpedoes and 2-way missiles as alternatives to the regular surface-crawling missiles. Meet the new ripple "toothpaste" laser, the tailgun (replaces double and fires forwards/backwards, ditching the 45º shot) and the force field (replaces the regular shield and guards the whole ship, but is weaker and disappears at the mere contact with an obstacle). These enhancements are rigidly combined into the four available weapon arrays. Experimenting with all possibilities is quite fun, but eventually I settled with the original configuration as my favorite (type 1 + shield).

Unless you've been living under a rock you probably know the drill about powering-up: collect capsules left by enemies and light up the weapon bar. Push the button to activate the desired power-up and increase the speed and the number of trailing options (up to 4) or activate missiles, double/tailgun, laser/ripple and shield/force field. It's simple, intuitive and opens a whole world of exquisite planning, especially when you make progress and realize some parts of the game should be approached more carefully than others. Make no mistake, Gradius II is tougher than the first one and demands a good deal of strategy and memorization if you want to see its ending. Blocking people from winning cheaply is the main reason why checkpoint-based shooters are hated by many, and Gradius II is a prime example of that.

It's not just the gameplay that sets this sequel apart from the first entry in the series. Konami infused the game with a lot more graphical flair. After you play the first stage a few times it starts getting repetitive, but fortunately the second stage puts the game back on track with awesome music and bold level design. It always reminds me of the Alien movies, with all those cocoons and facehuggers (shiphuggers?) coming out of them if you avoid shooting for a brief while. After that comes the dreaded crystal stage (die there and you might as well reset), a new volcano area, the mandatory moai stage (I hate it), the new sphinx-themed level, a high-speed section where you'll get nowhere without memorizing a safe route, the nerve-wrecking boss rush from Salamander (die anywhere and start the level again) and the final fortress incursion with the mechanical spider prior to the last boss. As a whole, the journey is fantastic and still stands as one of the best designed shooters of its time.

With a more generous extend scheme (first with 20.000 and another for each 70.000 points afterwards), Gradius II for the PC Engine CD stings a little bit less than the arcade game. Rank is still a concern and raises according to the number of options you activate, and even though some people don't take the fourth one to avoid the stealing scorpion from appearing I don't really care and always go for maximum power because, you know, I want to destroy them all! Isn't that what the announcer says at the beginning of the game?

Contrary to what happened to Gradius, slowdown in Gradius II is considerably reduced and only kicks in during the parts with tentacles in the second stage. Loading times, however, are rather inconsistent and might make you wonder if the console has frozen - it's annoying at first but fear not, stars will fade in and pre-stages will eventually start scrolling for you. Sit back and enjoy the great music, focus hard to cope with the difficulty and be prepared for a massive challenge increase in the second loop.

In order to access the options screen you have to press ↑, ↓ or SELECT at the start screen. Some observations about the options: every difficulty has its own unique ending; VERY HARD is labeled as PROFESSIONAL, and is the only mode that doesn't allow you to activate continues or change the starting life stock. My new high score is an improvement of 15% over my previous one, again playing with Type 1 + shield on NORMAL. This time I reached stage 2-3. 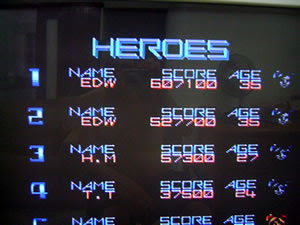