Having just recently beaten the PS2 arcade version of Space Harrier, clearing the 32X port was made easier than it would’ve been years ago, when I thought the game was simply impossible. Based on the experience with PS2 and MAME, the 32X conversion is nearly perfect, only differing in the frame rate. It reportedly runs at half the original speed of 60 frames per second, but on the eyes of a normal person (not an x-man like Northstar or Danger) there’s really no difference. For all that matters, Space Harrier on the ill-fated 32X Sega add-on is the arcade experience at home.

The minor differences from the arcade setting appear in the way the game treats credits, which is perfectly fine for a console port. Gone is the possibility of adding infinite lives to a credit, as well as continuing where you perished your last life. Continuing is only possible after you succesfully complete one of the bonus stages. I absolutely don’t care for the absence of the awful original analog controls, but the lack of an autofire option made the game a tad harder for me (autofire exists, but at the ridiculous rate of 1 shot per second). I had to learn how to not waste any shot and when it was best to tap like crazy.

In Space Harrier colors blend beautifully in a surreal rail shooter that takes place in the Fantasy Zone. Our hero runs and flies thanks to the plasma cannon under his arm, shooting single bullets that bend a little when necessary (was he a forefather to Wesley from Timur Bekmambetov’s Wanted?). There are no power-ups and no speed-ups, the only aid you get is an extra life acquired with 5 million points. Since all other game aspects do not deviate from the original source, I will be now focusing on the strategies I used both to survive and to achieve the highest score I could. 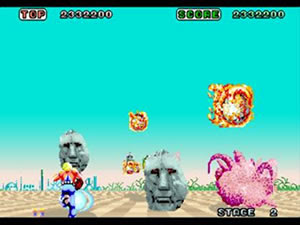 A game that benefits greatly from memorization, Space Harrier still takes a while to get easier with repeated plays. Even though enemies will always arrive in the same formations obstacles are randomly generated and actually comprise the bulk of the challenge. Memorizing helps to find the best positions based on the current situation. It’s possible to kill something right after it appears, but sometimes this is made impossible due to obstacles or bullets getting in the way. The farther you get the most difficult it becomes because things begin to approach faster.

As the game starts I try to kill everything I can by flying close to the ground and destroying bushes, trees and clouds. Herding bullets is good to take out more clouds after the three orbs arrive in a triangle formation. A well played first stage yielded over 800.000 points. The second stage feels like the first one, with lots of extra clouds to destroy, but the boss is a better fountain of points. Do not destroy its core right away, take out the moving heads one at a time. Be careful not to fire at the screen’s dead center and don’t worry when the heads spin to the front, they’re harmless. Watch out for bullets that travel at different speeds so you don’t get cornered. There are at least two other bosses that behave similarly, therefore the same scoring strategy can be used on them.

The third stage is very tricky because of the mushrooms, so flying high is the best alternative. Besides the plants, the incoming flying orange mushrooms are the biggest danger, especially prior to the boss. My strategy is to stay put just a little above the maggots and tap the fire button hard, so no mushroom would hit me. Moving like crazy and trying to dodge is risky.

All three tunnel sections (stages 4, 9 and 14) have no opportunities for extra score and get increasingly harder to get through. The last one is especially tough because the bullets fired by enemies will often corner you against the marble pillars. Try to kill everything as fast as you can. At least the tunnels don’t have robots, right? During the levels with lots of them try to make circular movements around the obstacles and avoid staying too close to the ground. The lower bumps/rocks are treacherous, dying in one of them always makes me feel stupid.

Who said Geeza was a nice place to fly by with a plasma cannon?
(courtesy of YouTube user marquis0r)

Amassing more points in the bonus stages (5 and 12) is a matter of pure memorization. The layouts in both levels are pretty much the same, so press the directionals wisely to make that Falkor creature destroy as many things as possible. Be warned that a poor performance in a bonus stage is a severe hit when playing for a higher score.

Stage 17 (Nark) is insane, with clouds and crystals that close in on you and lots of obstacles intertwined with robots. Surviving Nark practically means a 1CC, provided you don’t mess up in the last stage, a boss rush that brings nothing new to the table. Actually it’s a bit disappointing that Space Harrier doesn’t have a proper final boss.

I’m very proud to have 1CCed my first 32X shooter. The system might be a massive failure, but Space Harrier 32X is solid fun and leaves nothing to be desired in relation to the arcade game. Now for the ports on the Playstation 2 (the remake), Sega Saturn, PC Engine, Master System and NES before moving on to the sequels! 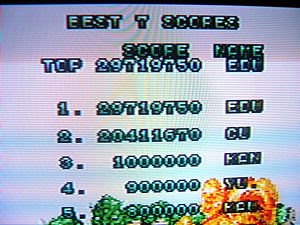