Trouble Specialty Aero Blasters. This is written in minor characters inside the emblem in the cover of Aero Blasters for the PC Engine. It gives an interesting idea when put in context with the cover art and the game's story, which involves starships in a mission to destroy a mysterious and evil mechanical fortress that's orbiting Earth. And boy, this really means trouble! Just like in many other cases in the shmup genre, what we have here is the quintessential idea of fighting against the odds in a larger-than-life, almost suicidal undertaking. You are the pilot, you are the hero and the future of the planet depends on the success of your mission.
Originally released for the arcades, Aero Blasters (also known as Air Buster) was ported for the PC Engine almost at the same time the Mega Drive version came out. Both are frequently compared to each other, so I'll drop my impressions right away: the Mega Drive port is the closest to the arcade original, with better and more detailed graphics; the PC Engine version has slightly better music and modifies or simplifies a few sections of the game, but it's nothing substantial or disfiguring. Both ports are extremely challenging and rank quite high in the 16-bit difficulty scale, but the PC Engine is downright cruel during the last couple of levels.
One of the most glaring aspects of Aero Blasters is its exquisite use of color. The palette is vibrant and lively, applied to levels that are very distinct from each other. Every stage feels unique, with nice parallax effects and a specific pace dictated by the scrolling direction and/or speed, as well as a diverse enemy gallery. Props to Kaneko, which was never a development powerhouse but was clever enough to infuse the game with such flair. One can still spot influences from other shooters though, such Namco's Ordyne (cloudy and colorful skies) and Konami's Gradius (the spawning orbs in stages 3 and 4). 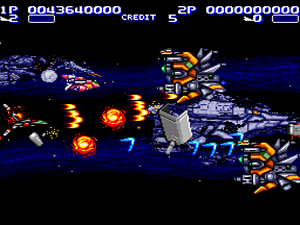 Out of gravity amidst outer space debris
Button II shoots and button I is used to unleash a "flash" attack that melts regular projectiles and weak enemies. This attack is performed by holding down the button until to fill up the charge gauge, upon which the ship will move a little slower until you let go of the button and trigger the attack. Don't make the mistake of taking the flash attack for granted, it's actually one of the most useful resources you can have in several parts of the game.
The story progression sees you departing to defend a city that gets oblitared by the time you reach the boss, then you must blaze through a series of maze-like corridors before scrambling towards the stratosphere amidst the clouds. Once in outer space the ship's movement is severely affected by the absence of gravity during two stages (every press of the d-pad sends you flying a little farther than expected). Gravity returns when you enter the alien fortress, but the final stage itself becomes the enemy when walls start moving as the screen relentlessly scrolls up and down.
Every once in a while a large yellow balloon will appear from the right. Shoot and watch as it explodes and releases several items, but stay alert to grab the one(s) you want because they fall away rather quickly. The most important one is P (power-up), which upgrades the ship's main shot. All others are interchangeable and take over the current auxiliary function when collected: S (satellite options), red M (missiles), green M (homing missiles), R (2-way rear shot), 6 (6-way shot) and H (rotating shot). There's also B, which stands for bumper and provides a minor degree of protection against side collisions. It only shows up close to walls in the second level.
If you're aiming for the 1CC achievement Aero Blasters can be considered one of the most demanding shmups of the 16-bit era with only three lives, no extends of any kind, deceiving enemy behavior and a slew of random dangers everywhere (not to say traps). The first couple of levels mislead you into thinking this might just be the next triumph of the weekend, but then the game throws all kinds of walls at you without an ounce of slowdown whatsoever. The major ambush in the station approach of the 4th level is a prime example of what's to come, as well as the bullet sprays from the mid-boss in stage 5. Handling and dodging these parts would be enough of a challenge in a regular shooter, but the extra difficulty brought about by the "lack of gravity" makes them a real test of strategy and reflex.
Seaside Front
(courtesy of YouTube user The Tenth Art)
By strategy I mean sticking to certain auxiliary weapons at specific points in the game. Despite its apparent weakness, for example, the 6-way shot is actually the best aid you can get from level 3 onwards, at least until you reach the stage 5 boss. Missiles are a nice choice for stage 2, and the rear shot really shines throughout the death circus in stage 6. The only weapon I couldn't find use for was the revolving shot (H). And then you have the flash attack, which is absolutely essential to increase your survival chances against the final boss and its antechamber.
Other details are more elusive, such as the opportunities bosses give you to milk a few more points from them (never mind the fact that the score display disappears during boss fights), or the fact that a medium-powered shot has better efficiency than a full-powered shot in the beginning of the game. Aero Blasters keeps players on their toes all the time, but is nice enough to include brief moments of peace for us to take a deep breath and move on to the next enemy wave. My favorite such moment is when you reach the highest possible altitude and the music changes in synch with the action as the outer space caterpillar mid-boss comes chasing you from below. The tune is upbeat and groovy, the enemy is mortal and the stakes are just about to get high. It's no coincidence you're halfway the journey towards victory.
Truth be told, just like its Mega Drive counterpart this port of Aero Blasters can be fun and infuriating at the same time. The PC Engine version however is a tad harder and certainly requires a little more patience to be conquered. There's no way around the fact that players need a deep knowledge of the game and of all factors that might disrupt a well-established plan towards the 1CC, as is the case with all shmups that demand a very strict approach.
Once beaten, the game loops and starts again with the same initial three lives, only with more bullets and enemies that suddenly become indestructible. The 1CC result below was achieved when I reached stage 2-3 on the player 1 side. Solo pilots can still choose the second craft if they want to, but there are no noticeable differences between them besides their color (player 1 is red, player 2 is yellow). Perhaps facing the game with a friend in co-op play makes it less daunting, I wonder? There's a secret code for the selection of two extra difficulties, but it's so flimsy and difficult to pull off I didn't even consider trying them out. 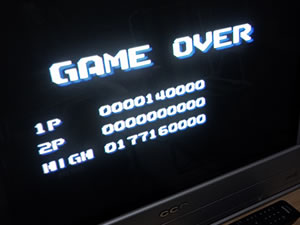