As ordinary as it comes, I guess Ordyne must have been a good choice of entertainment at any Japanese arcade joint back in 1988. It was different and colored enough to attract attention, representing a valid step-up from Namco's previous horizontal shmup Sky Kid. Unfortunately, it didn't age well. The game has a very childish atmosphere and doesn't offer any severe challenge until you reach the final stage. It's too childish to be honest, but this impression is certainly related to how the game is designed: threats are posed mostly by enemies and scenery rather than bullets, in a lethargic pace that never changes and rarely puts the player under pressure. Just to have an idea, even though Fantasy Zone shares the same fluffy graphical style I would never say it's childish in the sense I just stated, since it's a much more demanding game all around.

It's possible to play Ordyne on the Playstation if you get your hands on the Namco Museum Vol. 4 compilation. This version is arcade-perfect, but having the US disc is preferred because all the text in the game appears in English. The only other port I know came out for the PC Engine/Turbografx-16, which by all means is the perfect platform for a game like this. The underwhelming feeling that comes with the arcade version seems to be reduced when you play the 16-bit port. 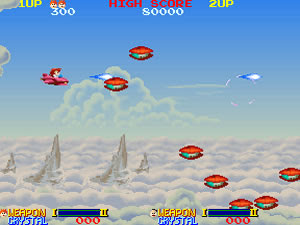 Ordyne is about a guy on a mission to rescue his kidnapped girl. He pilots a red flying car, and if someone joins the game as player 2 he/she will play with a green flying car. The attract mode shows all the tragedy surrounding the start of their journey, and in each of the seven stages a series of multi-colored enemies and obstacles will try to stop them. Basic controls consist of two buttons, one for the straight shot and another for dropping bombs (Darius style). Selected enemies release floating crystals used as currency inside the shop that appears from time to time, where you'll be able to buy upgrades such as speed-ups and special weapons. These crystals can also be used to bet inside the "Dream Co. Ltd." roulette in order to get extra prizes, which can be even more crystals or special weapons.

A nice gameplay aspect is that you don't lose the speed-ups you purchased if you die. Autofire isn't implemented, but you can get it temporarily by purchasing the "vulcan shot" upgrade (thankfully I had a turbo controller available). Most of the upgrades and special weapons last for a limited amount of time only, however the best one of them, the "stock bomber", will remain activated until you die. It shoots a stream of fireballs and works together with a shield that absorbs enemy bullets. Bonuses for score and crystals are awarded when you finish a stage, and upon beating the game all lives and crystals are converted into points. Therefore the final score is heavily influenced by luck, simply because winning at least one special prize of 100.000 crystals makes a great difference towards the end result. In some cases you're allowed to buy extra lives inside the shop, but it's not worth it in the long run because they're too expensive and you get less points from them in the end. As for extends, they come with 40.000, 120.000 and 240.000 points.

If you're used to more frantic shmups, Ordyne is sure to be a dramatic shift in intensity (not to mention disappointment). For the most part it's too soothing, instead of being hit by a bullet you're often taken by surprise by dying in iffy hit detection situations. The game gets really claustrophobic in the last stage, and those rotating sections are definitely the most dangerous parts to be navigated. Supposedly bullet count doubles when you play in co-op. It must be more of a challenge, but who else in this day and age would be willing to play such an old game with me?

All things considered, the best design aspect in Ordyne is the soundtrack. The BGM for the second level is incredibly catchy, and is probably what I'll remember most from now on. The Parodius-infused graphics and the mild parallax are pleasing to the eyes, yet there's nothing special about them. Due to its primitive, colorful and easygoing nature, the game is perfectly recommended as an introduction to the genre, especially for kids.

In line with all other releases in the series, the Namco Museum Vol. 4 comes with a Museum mode where you can explore details on the several games included in the package. It might have been a nice novelty back when the PS1 was still alive, but today all those virtual rooms just feel slow and cumbersome. A much better feature is the Records section, where you find lots of saved information on all games including play time, 1CC count and even stats on items collected and how fast you've killed bosses. While in the game, credits are added with the SELECT button and options are always accessed with the triangle button - remember that you have to leave the game if you want your session to be properly saved.

The score for my 1CC run (NORMAL) was rather crappy. It's possible to get much more by not dying and by having better luck on the special prizes. 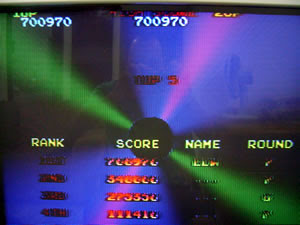