For various reasons, many video game development houses quit their activities after years of successful operation during the 90s. Video System was no exception to this closure wave, but before finishing their business they delivered a final game for what certainly was the company's highlight series: Sonic Wings Special. Direct follow-up to Sonic Wings 3 / Aero Fighters 3, it was developed and released for the main 32-bit consoles with an arcade counterpart named Sonic Wings Limited. I couldn't find precise info on which version came out first, but suffice it to say that even though they're visually similar Special and Limited have fundamental differences that completely set them apart gameplaywise.
The strongest distinction about this game is that it's actually a remix of Sonic Wings, Sonic Wings 2 and Sonic Wings 3. Aspects of all previous chapters are represented in levels, enemies, available pilots and firing patterns, which means that shmuppers with previous knowledge of the series will definitely feel at home when playing Sonic Wings Special. The ensemble brings back well-known faces such as the Japanese duo of Hien and Mao Mao, as well as the all-American pilot Keaton, Swedish viking Kowful and Whity/Spanky, the most intelligent dolphin pilot of all times.
So brace yourself for the final entry of the saga, complete with a TATE mode that brings the game closer to the roots of the franchise. Mind you, even though you can still play it on a regularly oriented TV, the use of a vertical monitor definitely provides the best experience you can get in Sonic Wings Special. The game is just as fun as the previous entries, maybe even more due to the amount of characters available and the more balanced gameplay.
Opening movie and first stage with Mao Mao
(courtesy of YouTube user The VideoGames Museum)
The choice of planes and pilots is still associated with countries (or organizations in the case of PKF, which stands for UN PeaceKeeping Forces). Two characters are available for each nationality/agency, and each one has his/her own features regarding plane type, speed, firepower and bomb stock capabilities. Overall the game tries to offer some sort of equivalence across the character roster, in that slower planes will have more powerful weapons and vice-versa. The efficiency and the amount of bombs you can carry also vary between planes, often representing the deciding factor when you're trying to select the character that suits your sensibilities the most.
Inputs haven't changed from previous games. By default button A is shot, button B is bomb, button C is rapid fire and button R hides/shows the score display, all inputs fully configurable as you wish in the options. Items available consist of P (power-up), B (extra bomb) and F (full power-up, appears only once prior to the final boss). The number of necessary Ps to max out the firepower isn't the same for all planes, and once maxed out all of them will degrade to a lower power level after a while if you don't get another P. Note that some planes also have charge attacks when at least one power-up has already been taken, so don't forget to try this when testing out the characters.
Sonic Wings Special preserves the splitting path mechanic introduced in Sonic Wings 3 while still randomizing some of them. Once the first stage in Tokyo is beaten three out of four random levels must be played (Mato Grosso, Paris, New York and "Dark Forest"), then you go through stage 5 in the Syrian desert. In stages 6 and 8 you must choose between two paths that also define the following levels (7 and 9), then proceed to the tenth and final level. The three randomized stages are easier the earlier they appear in the game, with the third one being the hardest. After that the difficulty remains somewhat the same, but you still have to consider a very noticeable rank mechanic that makes the game harder the more powered up you are and the longer you survive.
Every enemy and destructible bullet or boss part gives you points, so performing a wee bit of milking whenever possible is of course good for scoring higher. The biggest chunk of points however comes from collecting capsules in excess (2.000 for power-ups and 10.000 points for bombs), as well as picking up the currency medals released by destroying ground targets. When taken at the very top of the screen they're worth 10.000 points each, quickly decreasing their value to 200 points if collected from the middle of the screen or lower. Going for 10K medals is quite risky though, that's why it's so convenient to get the Dark Forest or Mato Grosso as second or third levels. As for extra lives, there's only one single extend granted after you score 50.000 points. 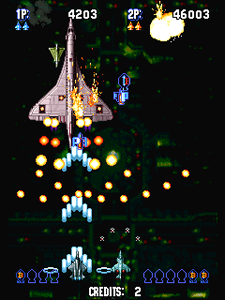 The skies above Paris were never this dangerous
I really like the difficulty progression in Sonic Wings Special compared to the previous games. It's not ridiculously hard as Sonic Wings 2, not as indulgent as Sonic Wings 3 and certainly not as cruel and in-your-face tough as the similar output from stray company Psikyo (namely the Strikers 1945 series). Sure, the first stage might soon put you to sleep, but everything after presents a gradual difficulty slope that never feels overwhelming even at high rank. Choosing a crappy pilot makes everything a tad harder, but the game spices things up a little by adding secret planes that are only available after you complete it with the default ones (continuing is allowed, just note that in the final stages you need to restart the level when doing so).
When a secret plane is unlocked a medal will appear over the character in the selection screen, prompting you to pick the desired plane once the pilot is chosen. If you manage to get all secret planes two new teams will be unlocked: the NATO team (also with unlockable secret planes) and two secret characters accessible by pressing UP from the USA team or DOWN from the NATO team (no extra planes for them). That means the game offers a whopping 26 different characters to play with, cumbersome unlocking criteria notwithstanding.
Another aspect about secret planes is that the game throws a completely different set of stages for them. Considering that Sonic Wings Special does not loop, it's as if the absent second loop levels were reserved especially for the unlockable planes, so be aware that you'll be facing a much harder game if you decide to play with one of them. Finally, a data save function can be used only once per credit when the pilot image appears between levels: press L + R and START to save, then return to this saving point from a fresh new entry in the start screen. The Sega Saturn edition also comes with an extra mini-disc with three songs dedicated to Mao Mao.
My pilot of choice for the 1CC on Normal difficulty was Kohful the viking and his default plane the AJ-37 Viggen. As for the splitting paths, I chose Panama in stage 5 and Mexico in stage 7. Other characters I enjoyed playing with were Volk and Keaton. Unfortunately good old ninja Hien was botched by too much spread in his daggers and an annoying effect that makes them stick to larger enemies before exploding, causing much visual confusion at least for me. Maybe I'll try to use a secret character when I get the chance to play the Playstation version, we shall see! 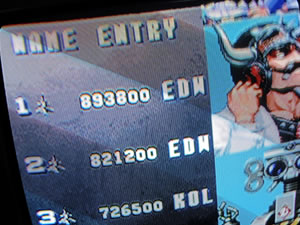