Following the debut of Sonic Wings in 1992 and the disbanding of part of the staff that developed it (they left to form Psikyo), Video System pledged allegiance to the Neo Geo hardware for a while. That's why the follow-up Sonic Wings 2 is presented in a 4:3 aspect ratio and doesn't bear the common vertical orientation of the arcade games of its time. Yet it still retains everything that made the first game a shooter hit, often being confused as a Psikyo-developed product due to the strong similarities in gameplay to later Psikyo titles (I guess the people who were behind Video System must get really annoyed when their game is labeled as another Psikyo shooter). Blame it on both companies for being so lazy. What matters for us is that Sonic Wings 2, known in the west as Aero Fighters 2, was also released for the Neo Geo AES. This brought the arcade experience home, proving that the series was kept in great shape with a few unforgettable tidbits of weirdness to the formula.

Only a few characters return for the sequel, which has the same alien race emerging again to threaten the world. It seems the job wasn't really done the first time around. Mao Mao and Hi-en, the Japanese team, are back, as well as a robotic version of the US pilot Keaton. All other characters are new to the roster, including the first dolphin pilot to have ever flown an aircraft in any shooting game. Spanky is his name, and bullet-blocking mines are his surname. Young Cindy and her tutor Ellen fly the same aircraft, and just like Spanky are attached to no real nation. A punk rocker named Steve fights for France and a baby (!) defends the UK flag. Silver is an older flight captain from the US, the slowest of them all and quite useless to be honest. All these names refer to the English language version of the game, and a few of them are different in the Japanese version. Take note: in Japan Spanky = Whity, Bobby = Arthur and Steve is actually a woman named Angela!

The good news is that there's no more attachment to the nationality of the first ship if a second player joins the game. It gives more freedom and leads to different interactions and endings for multiple character combinations. However, seeing all of them is a lot harder than before because Sonic Wings 2 received a substantial boost in difficulty. 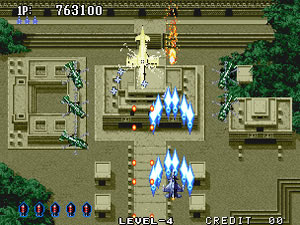 Mexico was never this dangerous before

While there are still some dull graphics in this sequel (France stage) they're far less frequent than what was present in Sonic Wings. The music is also marginally better, ranging from picturesque themes to the same haunting tunes in the final levels. There's a total of ten stages, and in the first half of the game levels 2, 4 and 5 might appear in any order. Starting out in Japan, the journey proceeds through the US, France and Brazil, the randomized countries. Stages 3 and 7 are breathers and can be considered bonus levels, in that there are no bosses and the only enemies you'll face are easily destroyable choppers and missiles that release power-ups and other items. Stage 6 takes place in Australia, stage 8 in Mexico and stage 9 in Hawaii. The last stage is in another dimension, guarded by a returning monkey boss from the first game and three random occurrences for final boss: an evil eye, a giant ghost from Video System's Rabio Lepus or a very rare giant fish. There's absolutely no way to figure out in advance which one you'll face, so be prepared for anything.

Preserving the series trademark of fast paced action and gigantic bosses, Sonic Wings 2 pumps up the challenge by adding progressive difficulty to the game. This is directly related to survival time, bomb stock and power-up level. It takes three power-ups to achieve maximum power, but after shooting at maximum power for a while the aircraft will inevitably power down. Every ship/pilot has its own shot pattern associated with an auxiliary side attack activated as soon as you take the second power-up (can be missiles, mines, lasers, napalm bombs, homing shots, etc.). Likewise, every character has his/her own bomb animation, with extra bombs appearing every once in a while. If you're already at max power every extra P will be worth 2.000 points - an F means full power and yields 10.000 points when the plane is already maxed out.

Basic scoring consists of killing everything, destroying all boss parts, reaping bonus stages like crazy and being greedy on ground items. Ground items are, in fact, the only addition to the original Sonic Wings formula as far as scoring goes. Certain ground enemies release bonus points in the form of the country's currency. If you uncover and take them as soon as they appear at the top of the screen you get 10.000 points for each one. This value decreases the longer they remain untaken, ranging from 4.000 to 100 points at the bottom line of the play area. Since rank makes it harder to stay in the upper half in later stages the optimum choice for a second level is Brazil, which can net up to 72.000 or 74.000 points. France has no ground items so it's a dead stage. USA has some ground items as well, but they're less than in Brazil. If Brazil appears later on the only way to safely collect the bonuses is by suiciding at the start of the level so the turrets won't fire in your face. Deliberately losing one life like this in a score-driven credit is okay, you can get it back with the single extend won with 200.000 points.

One of the things that differentiate Sonic Wings 2 from the diverging Psikyo output of the time (Gunbird, Sengoku Ace, Strikers 1945) is the number of tiny bullets mixed with large ones. Until sinking some decent practice into the game it's fairly easy to get surprised by the smaller bullets. The overlapping is dangerous, so bullet patterns must be carefully dealt with during boss confrontations. Rank is evil and will spawn more enemies, making them fire faster bullets and even adding new patterns and enemies all of a sudden (an example is the evil eye randomly showing up after the Mexico boss goes down).

Sonic Wings 2 is also famous for the humorous phrases from the characters and a few occurrences of some hilarious Engrish. Right before the Brazilian stage starts Spanky the dolphin goes with my favorite: "I never thought I'd be frying over a jungle". Indeed, getting fried by an enemy over the jungle isn't unlikely at all. Hi-en starts the game stating that "he's a ninja and his life is lonely and difficult". I'm no ninja but I can relate to the difficult aspect of trying to master the first loop of a such a tough game. Baby Bobby has probably the funniest sentences of all characters with stuff like "my name is Bobby and I am one tough baby" or "I miss my mommy". It's practically impossible not to burst into laughter, and I haven't even seen what the interactions in a 2-player game sound like.

Choosing a character that worked best for scoring wasn't too problematic because Hi-en is clearly the best choice. Even though he doesn't pilot the most powerful ship his homing shurikens are perfect to get virtually all items from the bonus levels. Spanky and Bobby have stronger firepower, especially at point blank distance, but lack side reach. They're pretty fun to play with, as well as Cindy/Ellen. As a whole the game is quite intense and really enjoyable, but it does require a lot of memorization and aggressive play in later levels.

My time with Sonic Wings 2 ended with the score below, achieved when I looped the game and died in stage 2-1 with Hi-en on difficulty setting MVS. For a while I used the Saturn controller with an adapter, but eventually I moved on to my precious Hori Fighting Stick Neo II for its turbo function. Next stop: Sonic Wings 3! 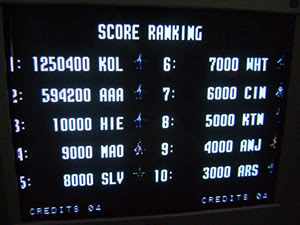