Originally released only in Japan for the Playstation, Dezaemon Plus suceeded Dezaemon on the Super Famicom as the next one in the series of shmupmaking titles. Known primarily only within the circles of hardcore shmup collectors, the title gained a little bit of extra exposition thanks to the worldwide digital re-release for the Playstation Network at around 2010. This "little bit" could've been a "lot more" had the publisher provided mouse support and a proper English translation. With all the game's interfaces still in Japanese I doubt any Westerner actually bothered to tinker with it (an online translation guide just doesn't cut it).

Anyway, if you don't care about the shmupmaking aspect of Dezaemon Plus you can still enjoy the sample games included in the package. The main title here is Daioh Gale Ver. 2, an updated version of Daioh Gale (from the SNES chapter) that's supposed to showcase the improvements in the development tools of the Playstation disc, most notably the ability to handle sprites at will with rotation, zooming and collision manipulation. There are also ten user-developed games that won two separate competitions held by Athena, but these unfortunately don't use the sprite resources from Dezaemon Plus and are instead based upon the SNES Dezaemon platform.

To complete the line-up of 13 playable games on the disc, one of the two hidden extra titles at the player's disposal is none other than the original Daioh Gale, which can be accessed by pressing L2 while choosing the option for the main sample game (first option in GAME PLAY). For those who care about the sample games only, this obviously makes the SNES entry in the series completely redundant and useless.

The only real link between arcade Daioh and the home variations of Daioh Gale is developer Athena. A few similarities in the gameplay also apply, but other than that Daioh Gale is in its own separate league of a console-friendly challenge that shouldn't give anyone much trouble to beat. One button is used to shoot (□), another to bomb (×) and several power-ups give some diversity as you play. Weapons come in three switchable flavors: red is the starting vulcan shot, blue is a missile discharge with secondary homing missiles and green is a fast-moving homing bubble stream (get two consecutive ones to max out firepower). Other items include speed-ups (S), extra bombs (B) and 1-hit shields (SH).

As the flagship sample game in Dezaemon Plus, Daioh Gale Ver. 2 comes with a few differences from the "vanilla" version, as listed below:


It's easy to notice that all changes were pretty much aimed at increasing the difficulty of the game by just a short margin, perhaps as a compensation for having one less stage than the "original". Completely botching the efficiency of the red/vulcan weapon wasn't needed though, especially since it isn't anyone's first choice unless you take into account its bomb animation, which is the best one for panic purposes or for hitting far beyond you current position. After all, the effect of bombing depends on the the weapon you're using. Red detonates a round blast that expands outwards, blue creates a vertical beam of inwards fading energy and green sort of increases the damage inflicted by the homing bubbles. It's also important to remember that weapon types are carried over when you die (there's no default besides the start of the 1st stage). 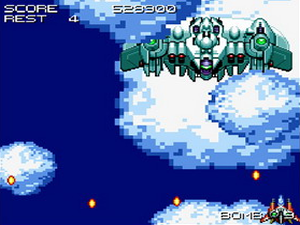 4th boss amidst the clouds

Extra lives are score-based and come at the mark of 200.000 points and for each consecutive 500.000 points after that. Since getting repeated items gives you nothing and milking opportunities are so few and far between, there are no special remarks to be made about the scoring system other than exploiting checkpoints to score higher. Though I'm normally against this technique in checkpoint-based games, I didn't feel guilty by doing it this time because the game is pretty short and, quite frankly, as much a cakewalk as its predecessor was. I'm only left to wonder if the other sample titles in Dezaemon Plus are of the same caliber. We shall see in the future.

For some weird reason the save option in the disc did not work on my console, so my high scores could not be saved. Either this function is solely dedicated to the shmupmaking part of the package or my memory card was faulty. In any case, here goes the best 1CC high score I got for Daioh Gale Ver. 2 (Normal difficulty). 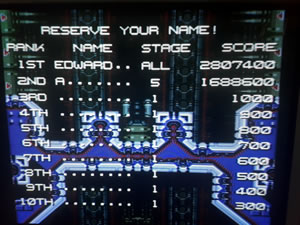 And while comparing titles I achieved the following high score in the original Daioh Gale, also on Normal difficulty (hold L2 when choosing the main sample game): 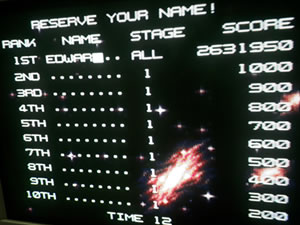 The next chapter in this series is Daioh P!, one of the sample games included in Dezaemon 2 for the Sega Saturn.
Posted by Edward at 4:57 PM