Captain Planet and the Planeteers (NES)

There were much more interesting cartoons by the time Captain Planet was airing on TV in my neck of the woods. In fact, Captain Planet was downright dull and boring, absolutely no kid in my circle of friends wanted to watch it. I never had any further contact with it until recently, when a friend brought to my attention the amusing death animation of the aircraft in Captain Planet and the Planeteers for the NES, a hybrid between a shooter and an action game (so there you go with the reason why I'm writing about it here). The game itself has a nasty widespread reputation that's totally undeserved, typical of people who have no clue about how gaming used to be during the NES days. By that time we needed to work our asses off to beat a game, and Captain Planet was just another tough title that demanded dedication.

An environmentally concerned cartoon, Captain Planet is about a blue superhero who's summoned by five teenagers who fight to preserve the planet against villains that want to pollute and destroy our natural resources. Each teenager has a magical ring with the power of an element (fire, water, earth, wind and "heart"), and by combining their powers Captain Planet will materialize to fight the evil menace. This same idea is used in the NES video game, which sees the teens controlling a ship of some sort to reach an enemy base, followed by Captain Planet taking over inside the base to defeat a villain. Therefore all five stages are divided in two sections each, all of them with increasingly tougher hazards to be dealt with. Mother Earth presents a briefing of the mission prior to each level, but trust me when I say the old method of trial and error might not be enough to really enjoy the game. I was almost cursing it in the initial flying section when I had the blessed attitude of reading the manual. Yes, that small booklet that comes inside game cases and people always take for granted...

Captain Planet and the Planeteers offers several kinds of challenge across its checkpoint-based shooting sections. In these areas controls work with shot (A), turn (B) and weapon select (START). All five weapons are always available: fire (straight shots), earth (rocks with hyperbolic trajectory), wind (circle of whirlwinds), water (wave) and heart (a vertical tractor beam, a.k.a. "be kind to animals" or "help me, you furry thing"). There's an ammo gauge for weapon usage, so it isn't wise to shoot indiscriminately. Fortunately destroying some waves or specific enemies releases items such as ammo recharge, weapon enhancer, speed-up, faster firing rate, forward/rear shot, 3-way spread shot and extra lives (looks like a small world map). Turning the ship around and changing the scrolling direction seems to be stupid but is actually essential in several areas, whereas some obstacles can only be overcome with the correct weapon. 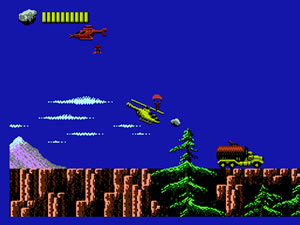 No, this is not Choplifter...

Once inside the bases you control Captain Planet himself, a superhero that flies 100% of the time and never lands on anything. He's able to punch (A) and morph into (B) the currently chosen element (START). When he "morphs" his body turns into a living molecule with the element's capabilities. Note that there's a slight delay whenever you use an elemental power, so make sure you've turned into a molecule before advancing against an obstacle. Generally water and wind are used to get through nets/walls, with fire and rock actively damaging enemies that block your path. Heart has its purpose but is seldom used in these areas. While Captain Planet doesn't have a health meter he can sustain a little damage before dying and respawning in the same place, but I noticed that if he remains unscathed for a while he's able to take more hits before biting the dust. Remember that getting hit also depletes the element power gauge faster, and once the bar is empty it's impossible to use any power. At least there are lots of items frequently released by killed enemies, consisting of small/full power recharge, temporary invincibility and extra lives.

On graphical merits Captain Planet is kinda ordinary, but the overall design at least gets the job done. Even though the enemy gallery isn't that diverse, each level has its own set of perils. The biggest complaint someone might have about the music is that the game doesn't have any tune from the TV show. Apart from that the soundtrack fits the stage themes nicely, and I'm quite fond of the song for the third level. Gameplay often gets claustrophobic, but hit detection is never a problem. Here are some pieces of advice I gathered for the shooting parts, some of them taken directly from the manual:
Note that at the end of every flying section you need to "land" the craft in a specific part of the scenery. As for the action parts, it's always better to be careful than hasteful. Stages themselves can be tough, but bosses are wimpy and might go out with one punch (stage 4) or simply surrender out of fear (stage 3). I giggled the first time I saw Captain Planet showing off his muscles after beating a boss! The trickiest action parts for me were always the third boss (passing through the fan corridor takes practice) and the whole 4.2 level, which is even harder than the last part of the game (5.2). Those dark robots are too strong and will kill you 100% of the time, so I was always prepared to lose at least three lives in that area. By the way, keeping track of the score and the number of lives is done by pausing the action with the SELECT button.

Watch out for the ships from Planet Patrol!
(courtesy of YouTube user Waldimart)

This is a hard game, there's no doubt about it. Nevertheless it's possible to take advantage of a few aspects that can help the player get through more easily. Every section starts with 5 lives, and as soon as you complete each checkpoint in the navigating sections of stages 2, 3 and 4 an extra life appears. This doesn't happen during stage 5.1, but the penguin in the last checkpoint always gives an extra life - a deserved reward for getting so far in that extremely hard level (it's not possible to stock more than 5 lives though). In stage 5.2 the upper cap of the spinning stationary robot that guards some teleport doors hides an extra life, so be prepared to hit it after the fourth punch gets in. Lucky streaks of invincibility items can get you through long distances inside bases, and many areas have corners with items that cycle automatically for you to choose which one to collect. For other hints at how to perform better in the game I heartily recommend everyone to read the instruction booklet. Seriously.

I was able to 1CC the game in 40 minutes. If it weren't for those unskippable parts where you must wait for the planeteers to rejoice on their success before summoning Captain Planet with their rings a complete credit would take less than that. At least you can take note of the passwords to jump to specific stages if you want to practice. Milking checkpoints or respawning enemies is possible, but it's risky and time consuming.

Those who enjoy challenging 8-bit games should give a chance to Captain Planet and the Planeteers on the NES, regardless of genre preference or how faithful it is to the source material. The good mix of shooting, exploring and strategy keeps you interested in seeing what comes next until you're finally able to face the ultimate villain Duke Nukem (!). The power is yours! 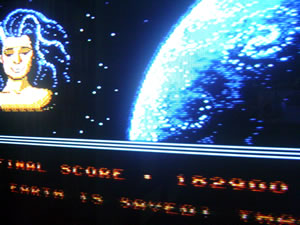