Outer space is the most iconic and preferred setting of the shmup genre, to the point where some people will ignore titles such as Espgaluda, Homura or Cho Aniki simply because they have people flying in them instead of spaceships. That said, Nexzr is probably a perfect fit for those who shun shooters with flying people. It fits the bill more than other games because its outer space setting is stronger than in the average shmup, with outer space vastness filling the backgrounds for the majority of the game. And while this could easily imply that this is an empty, drab looking product, the real picture is much more favorable. In fact, Nexzr is one of the finest shmups ever released for the PC Engine CD.

What makes this game such a delight to play is the high level of polish applied to every detail, from the highly emotional introduction sequence (images are everything, no words or translation are needed to understand the grief suffered by the ship’s pilot) to the final battle against a mechanized deadly foe. Graphics are crisp, the action is fast and diverse and the difficulty is in line with what one would expect from a decent 16-bit vertical shooter. It’s clear to me that this challenge level and the quality presentation are a successful way of compensating for the extremely simple gameplay. In Nexzr you only use a single button to play, there are no bombs of any kind and there are no selectable weapons or speeds. Progress might be halted by dying and getting respawned in a previous checkpoint, fortunately with reasonable ways of recovery. 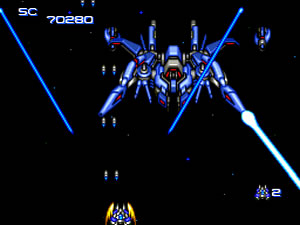 Behold the 4th boss in Nexzr

The spaceship in Nexzr is allowed to fire two types of weapons at once. All weapons/items are delivered by tiny carriers that zap across the screen, sometimes so fast you can barely see them. Main firepower can be a straight shot or a 3-way spread pattern (3-way is weaker but obviously provides better coverage). Secondary firepower comes in four flavors: a homing laser, a pair of self-sentient drones that fly around the screen and home on enemies, two piercing lasers that spread outward in approximately 45 degrees and crawling missiles that explode upon contact with the enemy. The last item is the ever so important shield, which offers invaluable protection against one hit only.

Lasers and bullets comprise the bulk of the enemy arsenal. Cannon fodder arrives in waves while large spaceships and robots materialize in neat morphing or zooming effects as the first stage unfolds against a battlefield background. It’s nothing as crowded as Eliminate Down’s first or Border Down’s third stages, but the atmosphere is pretty well established and the enemy forces are just as relentless. At this point one might see how the game resembles Recca or Star Soldier, but at the same time it’s quite clear that Nexzr has enough personality to stand on its own. Creative design dictates what comes next, as in the corridor that’s guarded by a mid-boss and must be navigated at high speed while the boss’s core tries to bomb you before he finally decides to fight. All of this is presented with no slowdown and no flicker, to the sound of absolutely fantastic music. There's no doubt the soundtrack complements the several changes of pace with ease and enhances the action with pumping energy.

Challenge-wise the game starts to show its claws in the fourth stage, with narrow passages amidst large meteors, enemies that explode in bullets, energy field obstacles, drones that shoot fast/cheap straight lasers and a large battleship that hatches waves of hazards. On the player’s side is a merciful extend scheme that grants extra lives with 20.000, 50.000 and 100.000 thousand points, with further ones at every 100.000 points afterwards. The scoring system is pretty straightforward and if you play well enough it’s not hard to achieve more than 10 lives by the time you reach the 4th stage. The difficulty increase by then isn’t a coincidence, it takes careful maneuvering and wise weapon choices to go on in one piece. As a rule of thumb, homing firepower is a must so that threats behind walls can be dealt with accordingly.

The attempt to give Nexzr an arcade flavor with the “arcade” resolution mode is a nice one. No, it’s not a TATE feature, it just shortens the horizontal span of the screen a little bit. This special mode doesn’t offer any advantage over the regular resolution but it still allows proper play and is far from the atrocious cramped aspect of a similar option in Burning Angels. Higher difficulty settings add more enemies to the regular game and can be practically considered "arrange" modes.

Since Nexzr was chosen by naxat soft to be re-released in the Summer Carnival series of competition shooters there's a little confusion as to which version is official or which one a thrifty gamer should buy. To keep it simple, Summer Carnival ’93 - Nexzr Special is just a special release that contains the main game and additional Time Attack and Score Attack modes. It's a joy for fans of caravan variations, but be warned that it lacks all the animated sequences of the original disc.

My final 1CC result in Nexzr is below (Normal). 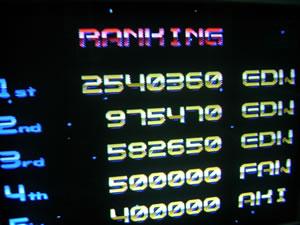