After their success with the groundbreaking Gradius, Konami decided to give the shooter genre another go with the first Gradius spin-off, a horizontal/vertical hybrid called Salamander. For the most part if plays and feels just like another Vic Viper adventure, with a few main differences: the checkpoint system is gone, stage orientation alternates between horizontal and vertical and all power-ups are acquired with straight icons instead of the power-up bar introduced by Gradius. It results in a more straightforward experience, one that can be picked up and learned a lot faster than what you would expect when playing a regular Gradius game. That doesn't mean Salamander is the better shooter, because it isn't. It's still memorable and difficult but, unlike its forefather, extremely uneven and ultimately unfair.

Salamander starts off really fine, with the classic organic stage that has spikes coming out of the walls and barriers of organic matter that grow into the play field or block the way completely. The first wave of popcorn enemies will equip the ship with options, missiles, ripple laser and shield. Each of these power-ups has its specific icon, and a demonstration of all of them is comprehensively shown during the game's attract mode. There are also icons for speed-ups and for a regular laser, which comes up in the beginning of the second stage. This regular laser is my favorite one, even if the ripple laser seems to cover a wider area of the screen. Taking everything that comes will render the ship fully powered by the beginning of the meteor shower in stage 2. 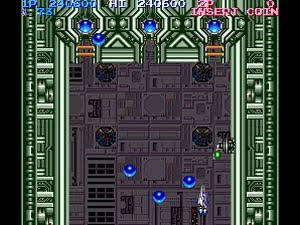 The journey that takes place afterwards is pleasant and entertaining. Following the meteor area a horizontal section inside a fire tunnel with revolving flame dragons leads to another vertical section with volcanos, falling rocks and multiple paths leading to a 3-core boss fortress. And that's where the problems with the game start. The 4th boss in Salamander is probably one of the biggest pricks I ever had to fight in my whole shmupping career. Taken as it comes, a natural player's reaction is to try and kill the cores, but the boss spits so many blue spheres that it becomes virtually impossible to do it. To make things worse, all shots/lasers are blocked by these blue spheres. It's simply disheartening to reach it fully powered and get mercilessly crushed while your face turns into a mix of incredulity and anger. Try once, try twice, try how many times you want, it doesn't matter: the 4th boss will teach you the meaning of defeat.

There's a catch though. All is not lost! The 4th boss can be defeated, but it takes a good deal of precise - I mean precise - positioning and an even greater deal of luck. Theories have been devised about how to beat the boss, and my approach was the one that says you should poke the ship to the leftmost side of the right core. When done correctly, this technique should result in all blue spheres missing Vic Viper until the confrontation times out (the middle and left cores shoot horizontal spheres and the spheres created by the right core bounce up and down). Easier said than done, obviously. Sometimes, even if you die once or twice, it's still possible to do it if you manage to destroy at least the right core: just put your ship inside it, watch the blue spheres bounce everywhere and pray none of them will hit your then sacred safe spot.

The last 2 stages are intense with the horizontal meteor shower and the final vertical showdown with big cores, moais and closing walls. As I mentioned earlier in this text, the overall difficulty in Salamander is rather uneven, with extremely easy bosses to compensate for the 4th bastard and stage sections that become nearly impossible if you die. The shield power-up is sort of useless because it fades just by touching other power-up icons! Graphically speaking, stages 2 and 5 are very poor (they only have meteors and enemies coming against a simple star-filled background), but all other parts of the game represent a step up from Gradius. Lots of the ideas and enemies from Salamander would be used later in Gradius II.

On the Sega Saturn, Salamander is included in the Salamander Deluxe Pack Plus, a collection that also contains Life Force (the westernized and later Japanized version of Salamander that uses the power-up bar from Gradius) and Salamander 2. The screen size for Salamander is customizable, as well as the original slowdown (wait control OFF will eliminate it completely). Upon beating the game once you unlock an option to play and practice the crazy difficult second loop.

Before I finish, let me share the most important thing one should know about the 4th boss: after defeating it once, it's possible to kill him very easily every time you reach it again. Just destroy the upper ground hatch as soon as possible, and it won't fire any blue orbs. This trick will work as long as you don't reset the game - a great reward for all the suffering you have to go through to beat him once.

Here's my high score on NORMAL, wait control OFF, game played up to loop 2-1. 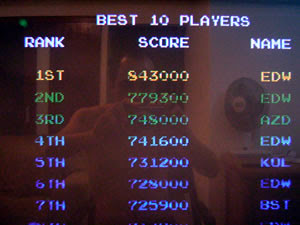