Many people like to bitch about how much shmups are neglected nowadays. Keeping it restricted to current generations, as of today the PS3 hasn't got any, the Nintendo Wii is a joke and the Xbox 360 is the only platform whose shmup library is steadily growing (not considering downloadable shit). Yes, we shooting fans starve. That's why I don't see this constant bitching with good eyes, and in the case of Triangle Service and their public pledge for people to buy Trizeal, I cannot think of anything else but to praise their pure love to the genre. After all, they went along, released another game after it and even a retail compilation title for the Xbox 360. And from what they showed in Trizeal for the Dreamcast I do believe they deserve all the support we can give.

In an era where the rule was to drop curtains of bullets on players, Trizeal stuck to the genre's roots and offered challenging, traditional old school gameplay. Though slightly not as graphically sharp as XII Stag, Triangle Service's first shooter, it is a sure step-up in the gameplay department. All six stages feel very different from each other and require specific strategies to be properly overcome, in a very balanced shooting experience that comes with some secrets and cool homages to famous shooters from the past. 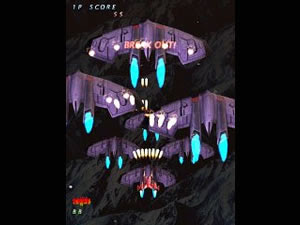 Trizeal's ship can assume 3 different forms that shoot different types of weapons: the vulcan, the homing missiles and the laser. Each one of them can be powered up 5 times with icons released every time a certain number of enemies is destroyed. There comes a moment in the power-up process where each weapon will influence and add to the firepower of the other weapons, with a fully powered ship shooting all 3 types at the same time with one of them predominant over the others. Each life has 2 smart bombs whose stock can be increased by fulfilling certain tasks during the game, and extends are given with 900.000 and 2.700.000 points. The scoring system relies on killing all enemies during the stage, bomb stock bonuses, triggering special parts of the game and collecting multiple medals without letting any fall down the screen - their value will increase until each one is worth 1.000 points. It's all very simple and straightforward.

Simplicity however isn't a sign of dullness, as the various secrets in this game clearly show. Special parts appear if you can clear everything that comes up in the "breakout" sections. What you get are new enemies, extra bombs and great new opportunities for scoring (including a nice homage to Space Invaders in the 4th stage). There's also a secret bomb that can be collected when you hover over an obelisk at the end of the 2nd stage, and extra bombs can be obtained in the downward shaft descent of the 5th stage. Other typical shooting sceneries, such as the huge spaceship battle (level 3) and the bosses that must be broken bit by bit, collaborate for delivering a nice package that should please old school shmuppers. Moreover, those who are familiar with XII Stag will recognize the obvious similarities in bullet patterns and stage design (the whole 2nd level and the asteroid field in level 4 are very much like XII Stag).


Battle over the mountains
(courtesy of YouTube user Peter's Trophies)

There are only a couple of things that should get some criticism in Trizeal. There are parts of the game, for instance, that feel graphically unpolished and below standards. I refer exclusively to the whole 2nd stage, which consists of a linear approach to a nasty spider-like boss. It's definitely the most uninspired section of the game, but thankfully it gets better after that. Slowdown arises during busy parts, especially when you use a maxed out laser weapon, due to its piercing bullet. It's actually very handy, especially when you consider another factor that's annoying at first sight: bullet visibility. Some color schemes used will make it hard to distinguish bullets between explosions and backgrounds. Don't let this frighten you though, this feeling vanished after I started dedicating myself to learn the patterns and anticipate the attacks. If you never had any problem with asteroid fields and rotating turrets before, be prepared for some tense moments if you decide to tackle Trizeal. The asteroid field is way treacherous and ends in the coolest boss fight of the whole game in my opinion. The rotating turrets are tricky and can wipe you out really fast if you lose concentration. I went through it unharmed and without bombing only once, normally I bomb once or twice because things generally get very nasty on my side!

It's possible to play with alternate ships. The second player in co-op gets a slightly faster yellow ship with different sprites and slightly altered weapons (example: the space between the laser beams is narrower). To play alone with this yellow ship you only have to plug the controller to the second port in the Dreamcast console and hit START. XII Stag's ship is also available by inputting a code in the title screen (right, left, left, shot × 12), and if you use it the 1st stage BGM will change into XII Stag's 1st stage BGM. Unlockables when beating the game include two new score attack modes: an OMAKE stage and a special one called LIFTING. Trizeal was also ported for the Playstation 2 and the Xbox 360 as Trizeal Remix.

My 1CC score shown below was obtained with the default red ship, on NORMAL.